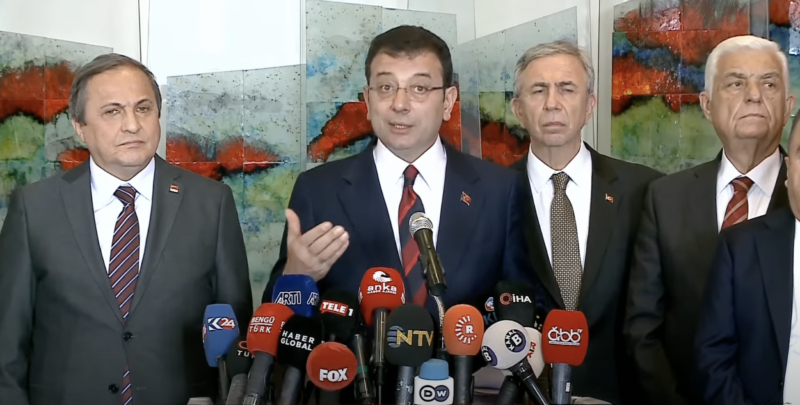 A screenshot from a press statement by eleven CHP mayors on December 27, 2021.

Turkey’s Ministry of the Interior launched a criminal investigation on December 26 against the Istanbul Metropolitan Municipality (IBB) — the latest spat between the ruling Justice and Development Party (AKP) and the main opposition Republican People Party (CHP). The Ministry claims to have discovered links between some of the municipality employees and terrorist organizations.

On December 30, a court in Turkey accepted the indictment. The trial will begin on February 18, 2022. If found guilty, the defendants face anywhere between 3.5–15 years in jail. Although the Minister of the Interior, Suleyman Soylu, said the decision was not political and rather a matter of security, the Mayor of Istanbul, representing the CHP, Ekrem İmamoğlu, has criticized the motives and expressed public support for all 80,000+ staff employed within the municipality.

The Ministry of the Interior shared a tweet claiming it has identified over 500 municipality employees and related companies with connections to Kurdish militants, leftists, and other controversial groups.

Some observers, including the leader of the CPH, Kemal Kılıçdaroğlu, suspect the most recent probe is an orchestrated attempt by the ruling Justice and Development Party to replace İmamoğlu with a government-appointed trustee ahead of the upcoming general election in 2023.

In the aftermath of the failed coup attempt in 2016, the trusteeship system expanded to include municipalities and other institutions, added Tastekin. Previously when the ruling AKP replaced elected Kurdish mayors (members of the Kurdish-oriented People’s Democratic Party, HDP), it also claimed the decision was not political but a matter of law. In addition, the government has tried and charged tens of thousands of people for terrorism since the failed 2016 coup attempt — among them numerous HDP mayors.

İmamoğlu is also considered a potential candidate in the upcoming general election and might pose a serious threat to current President Recep Tayyip Erdoğon’s candidacy.

Meanwhile, the Nationalist Movement Party (MHP) leader, Devlet Bahçeli, says İmamoğlu must be removed from his post if the investigations find him guilty. The MHP is in the coalition government with the ruling AKP. “If the allegations are true then the mayor has betrayed Istanbul. This treason can’t go unpunished,” Bahçeli said in an interview following the probe announcement.

Meanwhile, Istanbul Metropolitan Municipality (IBB), in a series of tweets on December 26, said it backed all its employees and that it would seek justice before the law. The municipality also said it was the Interior Ministry’s responsibility to identify individuals with links to terrorist organizations, not the municipality’s:

IBB and its 86 thousand employees will seek justice before the law till the end.

If those affiliated with “terrorists” are free to roam around and find jobs at public institutions, this isn't IBB's problem but the problem of the Ministry of the Interior responsible for security. The state's most important ministries must share the information and documents they have with IBB instead of engaging in political polemics.

This is not the first time the mayor of Istanbul has found himself in the crosshairs of the ruling party.

In the 2019 mayoral elections, the AKP lost control of major cities, including the capital Ankara and the Istanbul Municipality, where the AKP held power for the last 25 years. When election results were announced in Istanbul, the ruling party called for reruns, insisting that there was fraud and irregularities. İmamoğlu won the reruns with 800,000 more votes.

Shortly after the election, İmamoğlu was accused of insulting Supreme Election Board members by saying that “the decision affected Turkey’s international standing, describing the ruling as foolish.” In May 2020, prosecutors’ indictment called for a 4-year sentence against İmamoğlu based on this accusation.

In April 2020, when Turkey saw its first coronavirus cases, the ruling party accused the mayors of Istanbul and Ankara of illegal activities after the two municipalities announced COVID-19 relief funding campaigns.

İmamoğlu’s campaign to distribute free masks was also barred. According to journalist Amberin Zaman, “Erdoğan has accused the CHP of behaving like organizations outlawed for terrorism for discrediting his government’s response to the pandemic in order to stir unrest. The crisis demands national solidarity, he said.” Last year, amid ongoing protests at Istanbul’s prestigious Bogazici University, President Erdoğan accused the CHP of “serving terrorism” and “provoking the youth.”

Speaking at a press conference with journalists on December 27, 2021, the Mayor of Istanbul once again condemned the recent probe accusing the ruling government of diverting attention from the ongoing economic crisis.