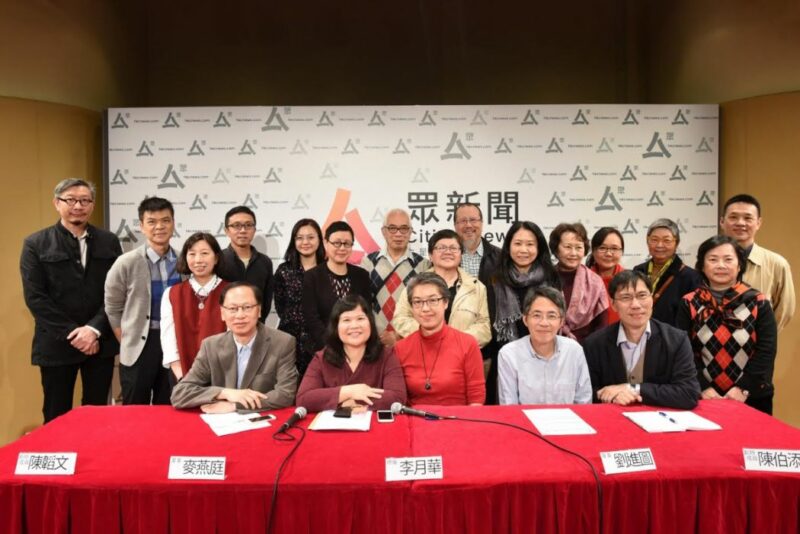 The following report was published in Hong Kong Free Press on January 3, 2022. It is republished on Global Voices via a content partnership agreement.

Hong Kong independent media outlet Citizen News announced on January 2, that they will halt operations on January 4 after five years.

The decision was made after more than 200 Hong Kong national security police officers raided the pro-democracy news agency Stand News on December 29, and accused the outlet of conspiracy to distribute seditious content. After police arrested six former and current Stand News directors and staff members, froze its assets, and confiscated its computers, Stand News took down its website and announced it would shut down its operation.

Citizen News’ website will cease to be updated and it will close “after a period of time,” the non-profit outlet said in a statement.

We announced with a heavy heart that CitizenNews will cease operation starting from Jan 4 (Tue).
To our subscribers and readers, we sincerely thank you for your support. We shall always treasure this incredible journey in the past five years. pic.twitter.com/32nSlQFAZR

The Citizen News team stressed the decision was made out of security concerns:

… [we have] never forgotten our initial intention, but regrettably, the drastic changes in society and the worsening of the media environment in the past two years has made it that we can no longer fulfil our ideals without any worry…in the eye of the wind, this small boat’s situation is severe under high winds and waves… In times of crisis, we must first ensure that everyone on the boat can be safe and secure.

Citizen News was launched in 2017 with support from a crowdfunding campaign. It continued to operate through reader subscriptions and donations. Last March, it set up a Chinese news division following a mass exodus from iCable News in December 2020. Ten former iCable journalists, including the head of the award-winning Chinese investigative news team, Szeto Yuen, joined the online media outlet.

Last October, the Security Bureau claimed that the outlet had “misled its readers” in stating that the security chief had refused to guarantee free speech in light of looming security legislation.

Citizen News was established by a group of veteran journalists and became an influential online news outlet after five years of professional journalistic practice:

[We] still remember that on New Year’s Day in 2017, Citizen News was launched…During the press conference, many ‘veterans’ in media said that they were concerned about the situation with press freedom in Hong Kong, and hoped that Citizen News could continue the legacy of professional spirit of journalism, returning to the original intention of journalism, serving the public and for the public interest.

HKFP has reached out to the Security Bureau for comment.

After Apple Daily and Stand News, Citizen News is the third independent media outlet to fall victim to the intimidation and police harassment campaign led by Hong Kong Chief Executive Carrie Lam, whose goal seems to be a total suppression of press freedom on the territory.

The city’s press union and foreign press club have both voiced serious concerns over the state of the city’s press freedoms since Apple Daily’s closure. A survey conducted among reporters last month found almost half of the 100 respondents were considering or had plans to leave the city due to worsening working conditions. Beijing deemed the survey to be an “interference.”