Some of our editors shared their top song of the year 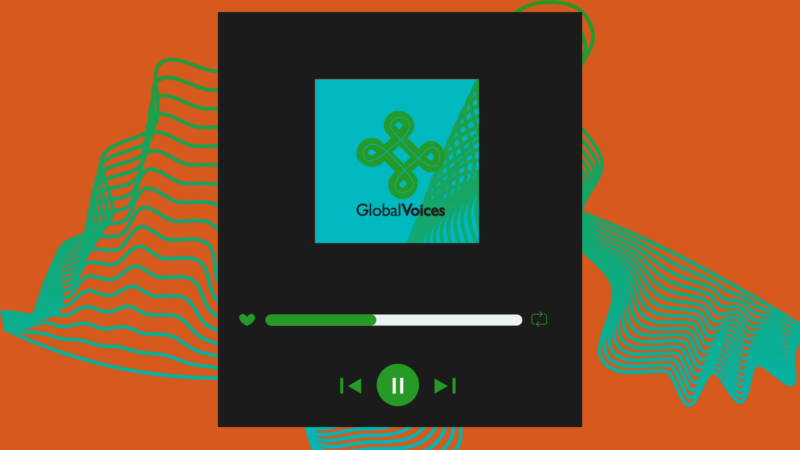 While Global Voices has always made room for art and audio-related pieces, this year we took our love of music to a whole new level! We launched Spotify and YouTube music playlists to make our articles more immersive and published the Striking the wrong notes special coverage which explored banned music from all over the world. Some of our top stories touched on protest songs, queer representation, and the reinvigoration of traditional African sounds.

Now as we reflect on 2021, we wanted to highlight the special role that music plays for our newsroom by featuring our editors’ top songs of the year. Here is a Youtube and Spotify playlist featuring 12 songs chosen by our newsroom community that best represented 2021. Find our explanations below.

To, čo nás spája (what connect us, in Slovak) – Živé Kvety

The band Živé Kvety is a female-dominated band from Slovakia that sings on social issues including gender, discrimination, mafia, and often performs in Prague. The song To, čo nás spája — What connects us, in Slovak — is about strength found in unity against racism, human-centered, and embodies their spirit. There is also nostalgia in the Czech Republic among people over 40 for the time when Slovak was the other official language heard everywhere in the media, at work, in the street. The band disbanded this year, so this is also a tribute to an amazing group of people. Some of them continue to perform separately.

I often listen to Thelonious Monk when writing, pretending that typing on a keyboard is like playing the piano. ‘Sweet and Lovely’ is just a wonderful jazz standard and an iconic little bit of Americana. Monk's interpretation is fun, challenging, and beautiful, and helps lift my spirits, to energize me and get me in the zone for writing. On top of that, this particular version features John Coltrane. The performance on ‘Thelonious Monk Quartet with John Coltrane at Carnegie Hall’ was lost for years and years until being released in 2005, so every time I listen to it, even though it’s hardly a new recording or a new release, feels special. Humming along, I have the energy to forge on with whatever writing or editing I'm working on.

This song is a Cuban protest song demanding freedom from the current government and from the narratives of the past about the Cuban revolution. The song title Patria y Vida (Homeland and Life) is a play on the phrase Patria o Muerte (Homeland or Death) that was a common refrain of the revolution. It still gives me goosebumps every time I listen to it! The lyrics are so raw and speak to all the frustrations felt in Cuba, but also in so many parts of Latin America.

Because it is the alarm clock of my wife, because it is hugely popular in our household, in the Philippines, and even on the internet. Also, the song reflects the dominance of K-pop, and it taught me to better understand the musical taste and sentiment of young people, including my children.

This song represents one of the things I missed the most in 2021: grabbing a loved person to dance ‘coladinho’ at a street party <3 It transports me to that scenario and I love it!

This year I became part of a very close-knit group of friends and weathered lockdowns and difficulties together because we all live very close together. And one of the couples adores this song, and we play it every time we hang out, so the song fills me with happiness and friendship.

This was Ukraine’s entry into Eurovision. It’s great because it mixes Ukrainian folk themes and melodies with a modern twist, and it promotes Ukrainian culture and ethnic themes while also showing they’re perfectly contemporary. See more here on the themes and history of the song.

During the pandemic, I started adding dancing to my post workouts and this song was just a mood booster. I even remember posting a video of me dancing to the song.

I still have faith in you – Abba

A band that was on hiatus for forty years, the same beauty, the same simplicity, and complexity. It brings the call for hope, faith, connectivity, and solidarity. It is kind of like telling GV after many years that “I still have faith in you.” Several songs in the album are also other favorites. Little Things is a great Christmas song.

I never thought I'd ever choose a Justin Bieber song as my favorite for a month, far less a whole year, but I love this song. In a year when I could not handle anything intense, whether music or movies, I listened to a lot of pop songs, ‘afrobeats’ and Latin dance music, but this song, so breezy and carefree, made me feel happy every time I played it, and it gets my pick. The combination of the voices of the two Canadians, Bieber and Daniel Caesar, and that of the meltingly soulful Giveon, helped make it my favorite. It always takes me far away from the whole Covid scene, which is what I needed. Enjoy!

It is the representation of a people – the spirit of a continent.

This song, by Colombian-Canadian singer Lido Pimienta, exudes joy, confidence, and hope on notes of marimba, all the while recognizing that times can sometimes be hard. This song helps connect to joy, my path in life, and Mother Earth when I feel disheartened.

In these times, we can connect through music to lift our spirits, live, and do the work we do. Find her lovely video on YouTube.