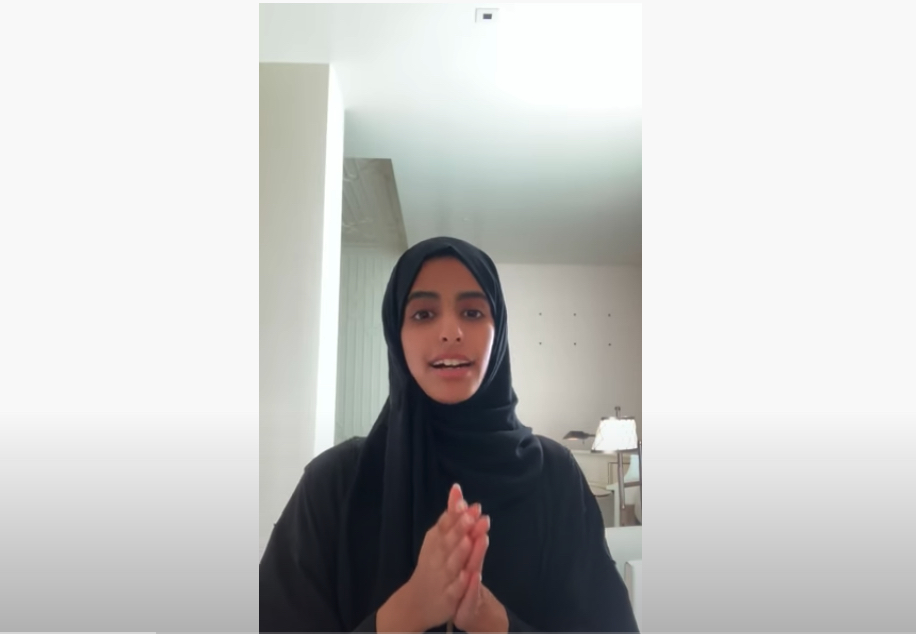 A screenshot of Noof Al-Maadeed from her YouTube video entitled عودة #نوف_المعاضيد الى قطر ٢٠٢١ (The Return of #Noof_AlMaadeed to Qatar 2021), posted on October 6, 2021

This post was written by Khalid Ibrahim, executive director of the Gulf Center for Human Rights (GCHR), an independent, non-profit organisation that promotes freedom of expression, association, and peaceful assembly in the MENA region.

Noof Al-Maadeed, is a 23-year-old Qatari woman, full of ambition and high hopes. When she faced domestic violence from members of her family, including her father, and government institutions failed to provide her with any protection, she fled her country to Britain after using her father's phone without his knowledge to obtain permission to travel. In a television interview on August 4, 2020, she spoke of her November 26, 2019 escape from Qatar to Britain, via Ukraine.

Upon arriving in Britain, she applied for asylum. During her stay in Britain, Al-Maadeed introduced herself as a defender of Qatari women’s rights and explained how male guardianship prevents women from working or traveling without a male family member's consent, as well as how women victims of domestic violence are left with little protection.

Al-Maadeed withdrew her application for asylum in Britain after receiving assurances from the Qatari authorities that she would be protected if she returned to her home country. On October 6, this year, Al-Maadeed posted on her Instagram account a video in which she explained the details of her return from London on September 30 to the capital, Doha, where she arrived the following day.

What happened next is incomprehensible. Qatari authorities, who pledged to protect her, as it should with to all citizens, reneged on all their promises and left her alone trying to survive domestic abuse.

In a video posted on her Twitter account on October 12, Al-Maadeed said that she had been subjected to three failed assassination attempts by her family. She also described her father's coming into the lobby of the hotel where she was staying, despite being one of her main opponents and the reason for her running away from home. Perhaps the following tweet, dated October 12, honestly sums up the torments she suffered upon her return:

My family, and those who I count as my own, want to slaughter me.

“Sheikh Tamim is the only one who can stop the danger to my life with his own hands.”

On October 13, Al-Maadeed completely disappeared from social media, and her whereabouts have not yet been known. The Emir of Qatar, Sheikh Tamim bin Hamad, on whom Al-Maadeed relied for protection and pleaded for support, was not able to provide the necessary protection for a citizen who did not commit any violation and voluntarily returned to her country based on many promises from the authorities that they'll keep her safe.

Since her disappearance, there have been conflicting reports, with regards to what has happened to the 23-year-old. According to some reports, Al-Maadeed was killed by her family, while others reported her forcible detention in a psychiatric hospital under heavy sedation, Meanwhile, the Qatari government refuses to provide documented information to prove that she is alive, which raises many suspicions.

The Gulf Center for Human Rights cannot confirm any of the above-mentioned reports but holds the authorities, who have pledged but failed to protect Noof Al-Maadeed, responsible for any harm done to her. At present, all information indicates that Al-Maadeed is facing serious risk to her life and freedom. If not killed, then it is a fact that she may be facing a lengthy incommunicado detention, which puts her life at imminent risk.

The GCHR, once again calls on the international community, particularly UN institutions, and governments with influence in Qatar—including members of the European Union—to take immediate action to pressure the Qatari authorities to ensure that Al-Maadeed is safe and can live freely in Qatar.

The government of Qatar cannot continue to ignore international opinion that is searching for the truth, and its absolute silence will be a sure condemnation, as it bears full responsibility for preserving the safety of its citizens, including Nouf Al-Maadeed.