The return of the rufous-necked hornbill to Nepal

This species of hornbill was last seen in Nepal in 1829 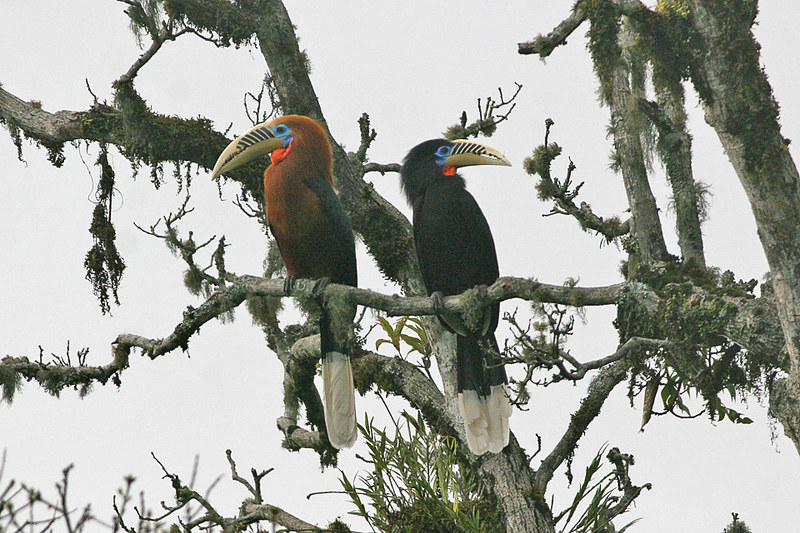 A pair of rufous-necked hornbills. Image by Flickr user Ron Knight, CC BY 2.0.

It took almost 200 years to establish the existence of the rufous-necked hornbill (Aceros nipalensis) in Nepal, last seen in the country in 1829. Wildlife photographer Deven Kharel found and photographed a pair of male rufous-necked hornbills on December 21, 2021 in Sim Dhap of Suryodaya Municipality in eastern Nepal’s Ilam District. Naturalist Brian Hodgson had discovered this bird in Nepal in 1829 and coined the scientific name Buceros nipalensis. Before Kharel’s find, these birds were reported to be extinct in Nepal though they were still found in India, Bhutan, China, Myanmar, Laos, Thailand and Vietnam.

“It’s one of greatest achievements in my wildlife photography career,” said Kharel talking to Global Voices on the phone from Ilam district in eastern Nepal. He also mentioned:

Nobody had photographed this bird in Nepal before this. I have also photographed other birds for the first time in Nepal, including the green imperial pigeon and scarlet-backed flowerpecker.

Biodiversity analyst Kamal Maden wrote in the Nayapatrika daily about the finding of some rufous-necked hornbills in 1850 and criticised the authors of A Guide to the Birds of Nepal for declaring the bird probably extinct in Nepal. In a response to Maden’s criticism of the lack of research on rufous-necked hornbills, Carol Inskipp, one of the authors of the book, wrote on Facebook:

Considering the complete absence of Rufous-necked Hornbill from Nepal for nearly 200 years, the 2021 sighting of this globally threatened species, by D. Kharel is an important record, which should be published in a peer-reviewed journal with the original photographs. In addition, further surveys are required to establish whether the species is resident in the country or merely an occasional visitor and of the extent of suitable habitat.

Indicator of a forest’s health

When he discovered it, Hodgson wrote about this beautiful bird, in 1833:

This remarkable and very large species, which I have the advantage of contemplating at leisure in a live specimen, measures from the point of one wing to that of the other, four feet five inches; and from the tip of the beak to the extremity of the tail, three feet six inches, whereof the beak is eight inches, and the tail, one foot five inches.

As the name suggests, male hornbills have rufous-coloured head, neck and underparts, while females are predominantly black in colour.#birdphotography pic.twitter.com/VYiu9Ipm19

One of largest Bucerotine hornbills. Vulnerable on IUCN Red list with less than 10,000 adults left in the wild.

The rufous-necked hornbill is categorized as “vulnerable” by the International Union for Conservation of Nature (IUCN). These non-migratory resident birds are monogamous in nature and nest in natural holes and hollows in old, tall trees. Since they require large tracts of forests with large trees for nesting, their presence indicates the good health of a forest. They also play an important role in seed dispersal.

The beautiful Rufous-necked Hornbill. Here seen carrying a berry to feed the female. This gifting of food during the mating ritual is common among birds as it is among humans. #Flashback #birding pic.twitter.com/QdMt5lMofh

These birds are threatened by habitat degradation and fragmentation, deforestation, and hunting and trapping for the pet trade. However, conserving them will not only help save forests but also bring tremendous tourism prospects for Ilam District, as it has in Latpanchar, a small hamlet in neighbouring India’s Darjeeling District.