The country's first ever presidential election was scheduled for December 24 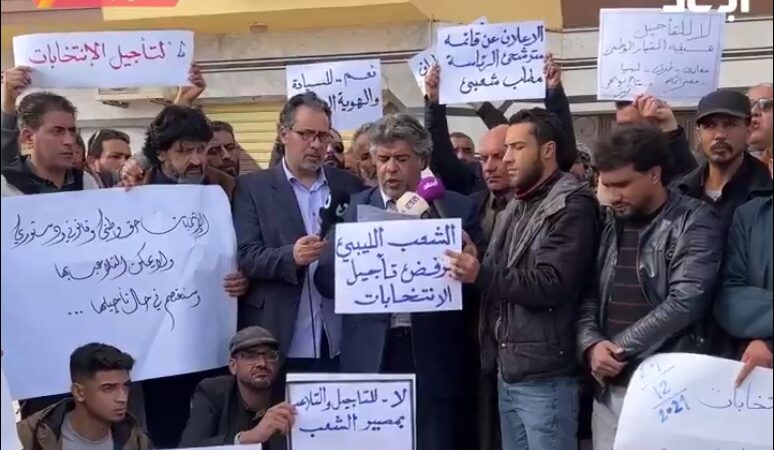 Protesters in the eastern city of Tobruk demand that elections be held no later than January 24, and that those who delayed the vote be held accountable. A screenshot from video on Twitter of the protests on December 24.

Hundreds of Libyans have taken to the streets and social media to express their frustration at the last-minute calling off of a much-awaited presidential race. It was hoped that the vote, which was scheduled for December 24, would bring an end to the years of battling that have wrecked the country, by ushering in its very first elected president.

More than a year of preparation for the vote has culminated in a proposal by the High National Election Commission (HNEC), tasked to organize the polls, for the election to take place on January 24, 2022.

The presidential election, the first in the north African country's history, was agreed upon by warring factions as the linchpin of a UN-sponsored peace process that began in October 2020, after a decade of fighting and turmoil.

But political disputes over the legal basis governing the vote, the candidature of polarizing candidates at the top of conflicting factions, the absence of a a genuine national reconciliation — seen in the increased armed fighting among militias despite a ceasefire — have delayed the announcement of the final list of candidates, and prevented campaigning from taking off.

Protesters took to the streets in various cities on December 24, the day of the supposed vote, demanding local and international commitment to holding a free presidential race, and an end to foreign meddling in the country's affairs by regional players whose troops and mercenaries remain on Libyan soil, feeding the ongoing battling.

Crowds are still flocking to the site of the protests, rejecting the vote's postponement as well as the brazen [foreign] interference in the Libyan affairs.

In a video posted on Twitter, women who took part in one of the protests carried banners stating “Elections will end divisions,” and “The homeland is for everyone.”

The statement of people of Tobruk with regards to the postponement of Libya's elections.

A statement read out on behalf of protesters in the eastern city of Tobruk demanded that those who hindered the vote be held accountable internationally, and that the date January 24 be the final deadline for the vote to take place, along with parliamentary polls, which were earlier postponed to that date.

A demonstration organised by Baltrees with their yellow vests, from in front the big hotel to the Green Square against the postponement of the elections and demanding that the delay doesn’t exceed 60 days.

Challenges to holding the vote on time began in September when the parliament's speaker Aguilah Saleh, unilaterally passed the electoral law, without it being properly ratified by other lawmakers, and without the approval of another state body which saw it as flawed. Saleh would later announce his intention to run in the presidential race, adding to the controversy.

Polarizing figures, including Saif al-Islam, who is the second son of the deposed longtime dictator Muammar al-Qaddafi and was once groomed to inherit the reign, also emerged as presidential candidates. Still very popular among many Libyans who reminisce about days of stability, and yet seen as seeking to reclaim his power and undo any political reforms created by his father's ouster, Saif's candidacy was first rejected, but then reinstated by a court in Libya. This raised eyebrows among those who see him ineligible to run, as he faces charges in the ICC for committing crimes against humanity.

Commander Khalifa Haftar, who governs eastern Libya and whose militias and fighters failed in assaults that aimed to bring the rest of the oil-rich country under his control, is also another controversial presidential candidate, along with Abdelhamid al-Dbeibah, who heads the transitional cabinet that came into place to ensure that the elections take place on time, and freely.

Some Libyans have resorted to social media to mock the confusion and chaos that overshadowed their election. Ibrahim Kheir posted edited an advert by the HNEC calling on Libyans to register for the polls, adding streams of tears to the faces of cartoons that resembled Libyan voters on the banner.

Talking about the Libyan election.

Another post shared an excerpt of a Syrian comedy show, in which a thug applies his interpretation of a free and secret election while managing ongoing polls.

Libyans elections in the views of militias.

In the weeks leading to December 24, militias have upped their fighting in some parts of the country, ending a period of relative peace which began with the UN-backed talks of last year. Armed groups attacked courts, police stations and each other in various cities across the country.

But despite an overall sentiment of disappointment, some Libyans saw that their country was not ready to hold such a milestone vote, in the absence of a constitution and solid national reconciliation.  Libya's Minister of Foreign Affairs and International Cooperation Najla al-Mangoush wrote:

At this crucial moment in the history of Libya, we, as Libyans and the international community, must realize that elections are a tool for achieving stability and not a specific goal.

Echoing this view, a Libyan wrote:

Libyan elections is the result of a solution, and not the way to a solution.

In the absence of a constitution in the country since before the 2011 revolt which unseated Muammar, many Libyans feel that electing a president could result in the winner enjoying unlimited powers.

No to elections without a constitution🇱🇾

Independence won over fake fingers. No to elections without a constitution.