The online news outlet has ceased all operations 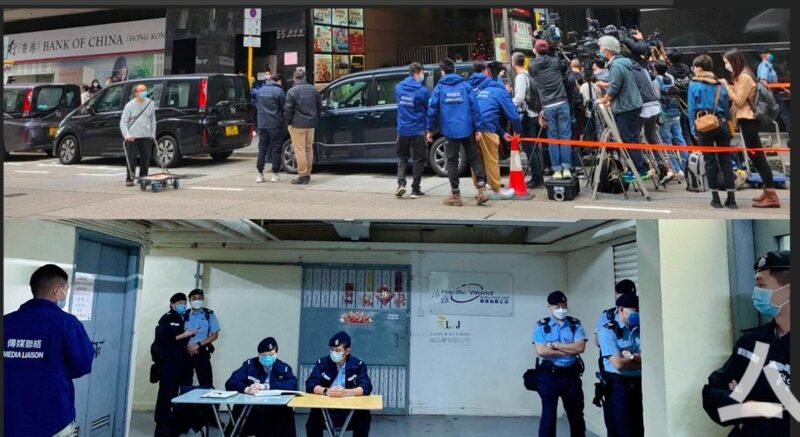 Hong Kong’s most popular pro-democracy online news outlet, Stand News, was raided by over 200 national security police officers in the early morning of December 29, 2021. It announced later in the afternoon that it would cease all operations on its Facebook page.

Six staff members, including current and former directors, were arrested for conspiring to publish seditious material. The officers cited the Crimes Ordinance law, which was established during the British colonial era.

Other staff members, including accounting staff; Kenny Leung, feature news editor; Ronson Chan, deputy assignment editor and the Chairperson of the Hong Kong Journalist Association, had their apartments searched and were brought to the police station to assist in the investigation.

At 4 pm on the same day, the news outlet announced on its Facebook page that it would stop operating its website and social media accounts. In addition, the acting chief editor Patrick Lam has resigned and all Stand News employees are dismissed.

Ronson Chan broke the news of the police action with a brief live stream at 6 am on December 29 (local time) on his Facebook page. The news spread quickly on Twitter:

Just in: Police are at home of Ronson Chan, head of @HKJA_Official and deputy editor of @StandNewsHK, with a court warrant for home search over the crime of “publishing seditious publications”. The live stream was too short to know more details, as police warned not to film. pic.twitter.com/cSoTdL4JuE

The national security police officers also raided Stand News office and took away 30 boxes of documents and material from the newsroom early in the morning:

The raid and arrests

Stand News acting editor-in-chief Patrick Lam was taken out of the building where the newsroom is located on Wednesday at around noon, and was escorted into a vehicle by police officers.
Photo: Candice Chau/HKFP. pic.twitter.com/utfz3UWcWU

The four arrested ex-directors resigned from the Stand News in June 2021, after the pro-democracy Apple Daily was forced to shut down. The news outlet also removed a large number of opinion pieces from its website, rearranged contract terms with its staff members, and halted public donations to try and appease increasingly hostile political pressures.

Chung Pui-Kuen stepped down from his chief editor position in early November, citing family reasons. Chung’s wife, Chan Pui-man, was a former associate editor at the Apple Daily, and she is among the seven former senior managers and staff members who were arrested in June and are currently behind bars pending trial over national security charges.

While the police cited the colonial law for the arrests, the search warrant issued for the office raid is under the Implementation Rules of that National Security Law (NSL).

The police’s operation came just one day after Hong Kong prosecutors added a new sedition charge against the founder of Apple Daily, Jimmy Lai, and his six other colleagues who are already facing charges of colluding with foreign forces under the NSL.

According to a report from Reuters, the prosecutors’ charge sheet alleged that a list of publications distributed by Apple Daily between April 2019 to June 2021 could “bring into hatred or contempt or to excite disaffection” against the Hong Kong and Chinese governments.

The British colonial government used the colonial sedition charge to silence protest and crackdown on dissidents. The law was famously used during the 1967 riots, staged by the Chinese Communist Party against the backdrop of the Cultural Revolution in mainland China. However, the British government ceased applying the law in Hong Kong after backlash during the 1967 riots.

Since Hong Kong enacted the Bill of Rights Ordinance in 1991 — the local adaptation of the International Covenant on Civil and Political Rights — the city’s law enforcement authorities also refrained from using the sedition charges after the handover of Hong Kong to China in 1997.

However, the city’s prosecutors revived the sedition charge in 2020 to prosecute protestors for their sign slogans and expressions on social media, such as in the case of Tam Tak-Chi. It was also used against a children’s book artist who created illustrations presenting the Chinese authorities as wolves and Hongkongers as sheep.

Once convicted, sedition law violators can be punished by an HKD 5,000 fine and 2-years in jail for their first offense.

Stand News has faced tremendous political pressure in recent months. On December 3, the city’s security chief Chris Tang accused the news outlet of smearing and demonizing the authorities in their investigative reports on the smart city prison facilities and feature stories on the siege of the Chinese University campus in November 2019.

Meanwhile, the independent news outlet has been nominated by international press freedom watchdog, Reporters Without Frontier for its 2021 Press Freedom Prize for Independence in early November. RSF praised Stand News in its press release:

Founded in Hong Kong in December 2014, Stand News is an independent, non-profit, Cantonese-Chinese news website that undertakes to defend fundamental Hong Kong values – “democracy, human rights, freedom, rule of law and justice” – and aims to be a space where journalists are ‘independent of companies, shareholders, authorities and political parties…Today, Stand News continues to cover crucial political and social developments in the territory, and to provide in-depth coverage of government policy and all trials related to the National Security Law…

In a statement, the Foreign Correspondents’ Club (FCC) described the police raid on Stand News and the arrest action as “a further blow to press freedom in Hong Kong and will continue to chill the media environment in the city.” It also highlighted a survey finding released in November that 71 percent of FCC members in Hong Kong were concerned about the possibility of arrest or prosecution due to their reporting or from writing opinion articles in Hong Kong.

Steven Butler, Asia program coordinator at Committee to Protect Journalists, said the police action “amounts to an open assault on Hong Kong’s already tattered press freedom, as China steps up direct control over the former colony” and urged that “authorities must release the six and drop all charges against them immediately if Hong Kong is to retain any semblance of the freedoms that its residents enjoyed only a few years ago.”