Barbados prime minister calls a snap election, the first poll for the island as a republic

Two main political parties, led by women, will meet at the polls 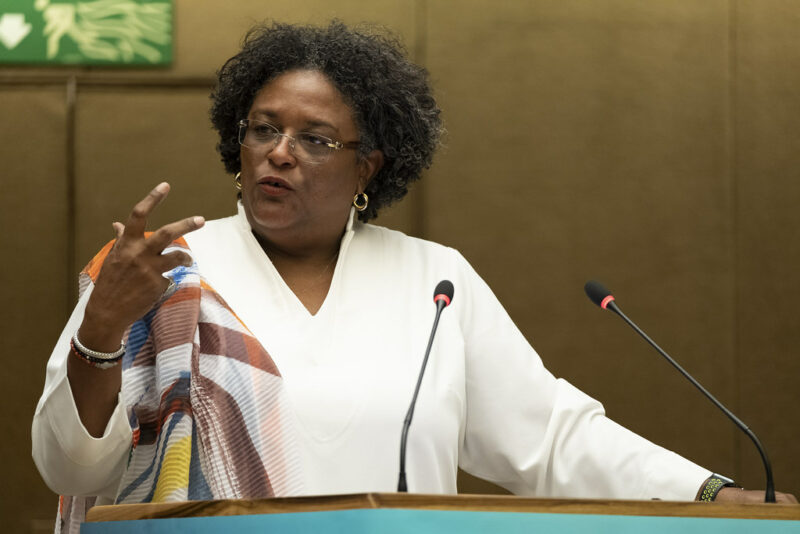 For the first time in the island’s history, women leaders will take Barbados’ two major political parties into the arena as the island prepares for a snap general election. Incumbent prime minister, Mia Mottley, head of the Barbados Labour Party (BLP) will face off with attorney-at-law Verla De Peiza and the Democratic Labour Party (DLP) at the polls set for January 19, 2022.

This will also be the first general election to take place since the island became a republic at midnight on November 30.

Prime Minister Mottley made the election announcement in a televised broadcast on December 27. Within 24 hours, posters were already going up across the island. The nomination of candidates will take place on January 3.

Polls were due to take place in 2023 and Mottley's reason for calling early elections, she said, was because Barbados should not start the New Year “as a divided nation.” She said her party, the BLP, was “willing to take the risk” of losing the election to ensure unity. The BLP had a resounding victory in 2018, emphatically defeating the DLP.

Quoting from an upbeat popular song “This is who we are,” tapping into patriotic sentiments and quoting from the Bible, Mottley asserted that “Barbados is special,” but expressed concern that Barbadian society was changing, and not for the better—including “a gradual deterioration in national reasoning, national focus …” She added, “I do not like what I see,” as she stressed the need for unity and a sense of purpose, frequently addressing Barbadians as “my friends.” 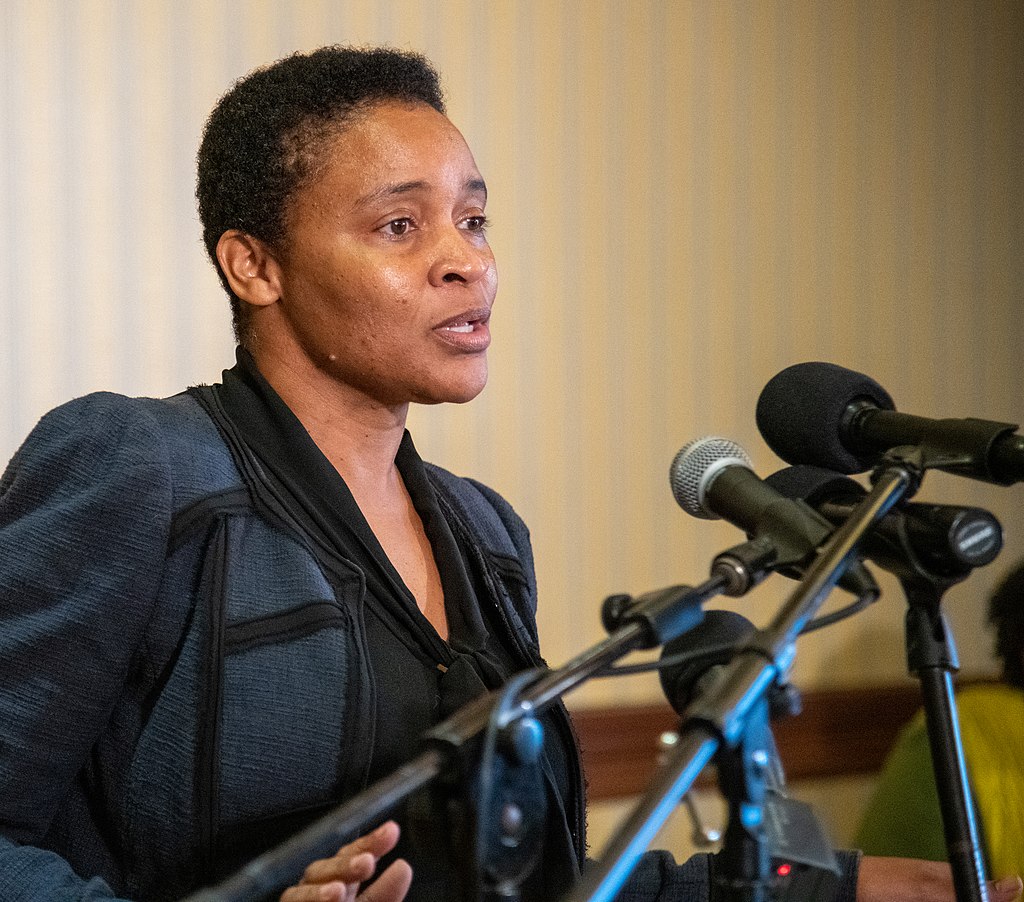 Verla De Peiza, leader of the Democratic Labour Party (DLP), speaking at a Social Partnership on COVID-19 meeting on March 10, 2020 at the Hilton, Barbados. Photo in the public domain.

The BLP holds 29 out of 30 seats in parliament. However, there remain concerns in some quarters over a new Constitution and other legal matters relating to Barbados’ new-found republican status.

#BREAKING – SNAP ELECTION: #Barbados PM Mia Amor Mottley announces Bajans will vote in their General Elections as a Republic on:

#DecisionBIM: For the 1st time in Barbados’ history, both major political parties will be led by women.

Verla Depeiza leads Democratic Labour Party (DLP)#Barbados will vote in its 1st election as a republic on January 19th 2022 pic.twitter.com/hE6Ac9Wprv

The main opposition responded to the announcement, citing COVID-19 uncertainties:

#BARBADOS: The main opposition Democratic Labour Party has blamed a non-caring Prime Minister Mia Mottley for calling a snap general election in the midst of a pandemic and urged supporters to boot the ruling Barbados Labour Party (BLP) out of office on January 19 next year. pic.twitter.com/Zhex75AqyX

And accused the BLP of panicking:

To some Barbadians, the announcement was no surprise:

I am surprised some people are actually shocked that elections have been called early…The writing was on the wall for weeks! #barbados #elections

The announcement was met with approval by many Caribbean commentators, who saw this as a bold move and smart political strategy by Mottley.

Barbadians on Twitter commented with considerable humor. While COVID-19 numbers have been decreasing on the island and roughly half of the population is fully vaccinated, some felt concerns about the Omicron variant may have been one factor in the decision to hold elections:

While one Barbadian quipped:

From Mary, Jesus and Joseph to Mia, Verla and Joseph in less than 48 hours. #Barbados #Elections #Scripted

The second Joseph she referred to is the opposition member in parliament Bishop Joseph Atherley, a minister of religion, representing his People’s Party for Democracy and Development since June 2019.

Every day @miaamormottley leaves me in absolute awe.
Look at women in politics nuh! Look at leadership!
Snap election for Barbados 🙌🏽…Bajans go to the polls on January 19th, 2022.
Great is Mia! pic.twitter.com/oIdbi5Vu96

Including an expat in Barbados:

#Barbados An election has been called in Barbados for January 19th. There is no one more qualified to run Barbados than @miaamormottley . I remember the days with no garbage pick up, sewage in the streets, no buses working. She has turned Barbados around. She has my vote 💯

One Trinidadian, noting Mottley’s call for unity, observed that his own society was “divided”:

T&T cannot say as Barbados that “we're currently divided”: T&T, because of its racial composition and consequent politics, has ALWAYS been a divided society; therefore, calling an election in T&T to bring people together to foster a ‘united nation’ will forever be a pipe-dream😞!

And from Curaçao, a suggestion that there are constitutional issues in which Barbadians have had no say to date:

Peace, is there an opportunity for the people in Barbados during elections to vote for new bills, amendments, citizens initiatives, new decolonized electoral system, reparatory justice referenda etc?

She was responding to a tweet pointing to the weakness of the Barbadian opposition:

Someone needs to start writing a book about political developments in Barbados between 2017-2027.

Is this a story of democracy in peril or the tale of Barbados’ rise to social and economic glory?

Either way, the opposition parties need urgently to awaken from their slumber.

Mottley has amassed a large personal “fan club” in Jamaica. Wooed by her stirring and hard-hitting speeches on the international stage, on climate change and other issues, many Jamaicans were deeply impressed by the declaration of Barbados as a republic, wondering aloud why was it taking such a long time for Jamaica to decide on the issue. However, there remain conflicting views on the benefits of becoming a republic.

I find PM Mottley is an excellent political communicator. The tone of the national address lastnight was very good. It felt like a chat between friends.

So what was behind the snap election announcement? One Jamaican surmised:

I am too, but in the back of my mind I'm thinking that this is to give the people a chance to choose a new government to lead them into the new republic. On the flip side of that coin, it's probably a power grab because the entire opposition is in a shambles.

Another Jamaican was also sceptical:

While one commentator and civil society activist observed:

Snap elections always watch worthy, so too language. Even as we have to take in the whole context of what is said, in this case, the references to ‘ divisiveness’ and needed unity to face expected Omicron wave etc..

On other Caribbean islands that still have the British monarch as head of state, public consensus on the issue of a republic is not so clear (unlike Barbados, Jamaica and other islands require a public referendum). One Grenadian commented:

There was even a hearty endorsement from far-flung Kenya:

President Kenyatta’s strategic ally & first female PM of Barbados Mia Mottley demonstrate leadership & remarkable political brilliance by taking a risk associated with only few in history.She called for a snap elections on Jan 19,week’s after walking her gvt out of the UK shadows pic.twitter.com/nfyItPsLH4

While there are no predictions or opinion polls as yet, 2022 should be an interesting year politically for Barbados, and for the Caribbean.