Ukraine is the second country to conduct census with Apple 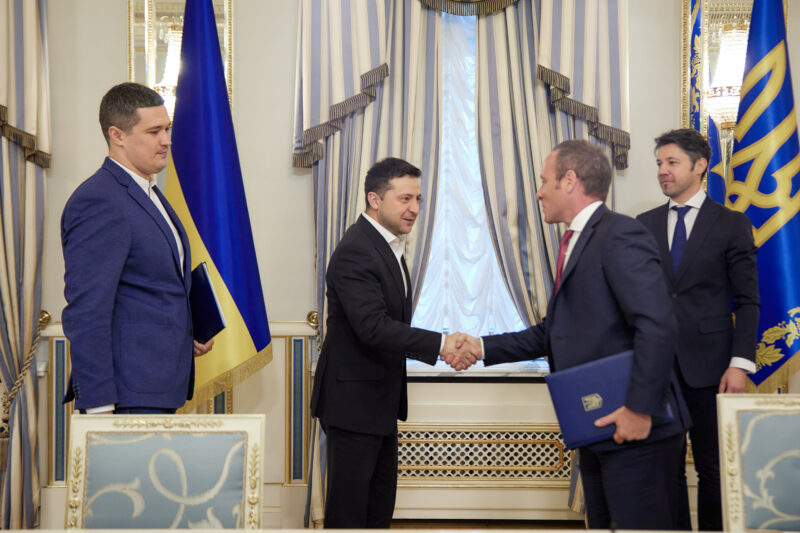 Officials from the Ministry of Digital Transformation of Ukraine and representatives of Apple Inc. sign a memorandum of understanding on 30 November, 2021, with President Volodymyr Zelenskyy present. Photo from president.gov.ua, CC BY 4.0.

Ukraine is gearing up to be the second country in the world, following the United States, to enlist tech giant Apple's help with the national census, slated to be held in 2023.

Ukraine's Ministry of Digital Transformation signed a memorandum of understanding with Apple Inc. and Apple Ukraine LLC on November 30. The document was signed by Mykhailo Fedorov, Deputy Prime Minister of Ukraine and Minister of Digital Transformation, and Mark Lennon, Director of Liaison with Public Authorities of Countries and Regions at Apple Inc.

President Volodymyr Zelenskyy was also present for the occasion and later tweeted that cooperation with Apple was a logical extension of the country's digitisation strategy. In the official news release about the memorandum, Zelenskyy was also quoted as saying that for Ukraine, “one of the main priorities is to digitize all public services, the work of public authorities”.

I am proud that 🇺🇦 will be the second country in the world to conduct a census in collaboration with @Apple. An important Memorandum of Understanding was signed today between @mintsyfra and this technological giant. Digitization is an unconditional priority for our state. pic.twitter.com/47jSFiRLe9

Apart from the state census, Apple aims to support Ukraine in several other ways, including raising digital literacy levels among citizens and working with teachers who use the iOS platform. Ukraine's cooperation with the California-based company will also focus on developing paperless state services for citizens, currently represented by the Ministry of Digital Transformation's flagship project, the Diia portal and app, as well as introducing digital technologies into the healthcare sector.

Minister of Digital Transformation Mykhailo Fedorov noted that the memorandum symbolized not only future digitisation plans, but also a recognition of Ukraine's achievements to date:

We are grateful to Apple for constant cooperation with our ministry and the opportunity to implement the world's best solutions to achieve our most important goal – turning the state into a convenient and efficient service that you want to trust.

Ukraine's last national census was held in 2001, and was also the country's first post-independence after the fall of the USSR in 1991 (see the census website here). The next iteration of the census has been postponed several times: originally planned for 2010, it was postponed until 2011, 2013, 2016, 2020 and finally, until 2023, with officials citing high costs and organisational challenges.

In the years following the momentous Euromaidan protests and turbulent political and social transformations, Ukraine has made strides in reforming state services for citizens and digitising a number of state systems, including state procurement and tax reporting.

In 2020, the Ministry of Digital Transformation launched the revolutionary mobile application Diia (Ukrainian for “action”), a cornerstone of President Volodymyr Zelenskyy’s campaign promise of making public services convenient and easily accessible via the internet. Today, the app is used by over 6 million Ukrainians and provides over 50 state services in digital format, including access to digital versions of vaccination certificates, passports, driver's licenses and other citizen documents and data.

Though Diia has been hailed as a massive success, it has also faced criticism for its lax data security policies and lack of transparency around safeguards for citizens’ digital identities. In May 2020, activists discovered about 900 GB of citizens’ personal data, including passport numbers and driver's licenses, being traded by an anonymous chatbot on the popular messaging platform Telegram. While journalists and researchers were able to confirm that part of the datasets had come from Ukrainian government registries, no evidence implicating Diia directly has been found.

Still, few disclosures were made about the security of citizens’ personal data on the app, and security specialists cautiously noted that not enough was known about Diia's security testing or any independent audits. The app's first public bug bounty program was not launched until December 2020. Despite this, the government continues to experiment with citizen data, granting various Ministries the power to aggregate and cross-verify data from multiple state registries while lacking comprehensive legal safeguards ensuring citizens’ right to privacy.

Although the news of cooperation with Apple is a massive boon for Ukraine, the tech giant has struggled to cement its image as a privacy-loving company and an advocate for end-to-end encryption. Most recently, it endured controversy around plans to introduce a system that would scan image hashes (unique numbers attached to encrypted images) uploaded to its iCloud storage for content featuring child exploitation and reporting those to the US authorities.

Using a popular tech solution such as an iOS-based app in a census comes with its own challenges. In an April 2020 CNET report on the US census which Apple supported with helping to develop the app for canvassers using iPhone 8, Stephen Moore, chief security strategist at Exabeam, a California-based cybersecurity company, said that unsanctioned access to census data was one “movie plot scenario” that could compromise census security and shift perceptions among citizens:

That'll erode the competence of the system and it'll decrease participation, which may be the goal of some foreign adversary, and that's a risk.

In the US case, these dangers were mitigated by developers through “multifactor authentication, the use of security tokens and end-to-end encryption“, as well as limiting the iPhone functionality so canvassers could not browse the internet or download other apps. Even so, a February 2020 report from the Government Accountability Office recommended that the US census bureau conduct more testing and assessments “to improve system performance and scalability”.

It is as yet unclear which of these solutions will be implemented in Ukraine's census scenario and how the census-specific software and hardware will interact with the existing Diia framework to ensure citizen's data remain secure.