Workers are overworked, with hardly any time off 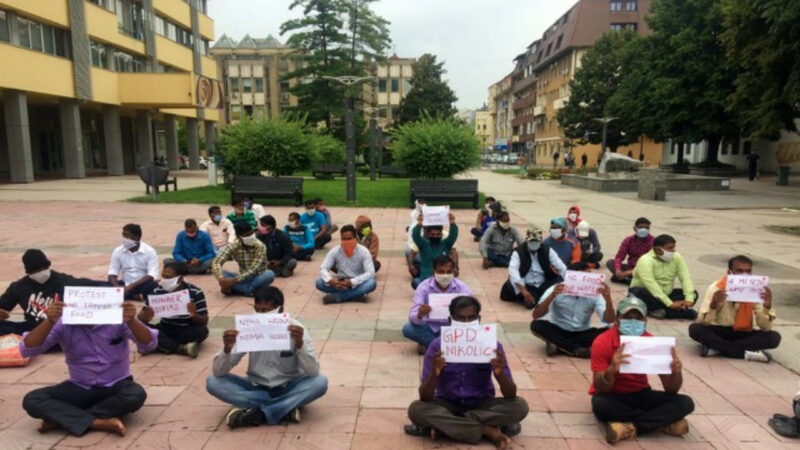 Indian migrant workers holding a hunger strike in front of the Kraljevo mayor's office. Photo by Boobalan Dhanapal via Unbias the News. Used with permission.

This article was originally written by Yamuna Matheswaran, edited by Ankita Anand, and published in Unbias The News. An edited version is republished in two parts by Global Voices as part of a content sharing agreement. Read part 1 of this report here.

Indian migrant workers have been targeted to work at mega construction projects in EU-candidate state Serbia. A group of workers is not willing to give up fighting for their salary, despite the legal loopholes that a company registered in America has used to contract them for work in Serbia.

In 2019, over 150 men from various Indian states began working for GP Nikolić, a Serbian construction company, on a number of infrastructure projects across the Balkan country.

“We worked every day, did not have a single day off”

The process of emigration for migrant workers from India is a long and hard one, even before they board a flight. To secure the job in Serbia, Mukhtar Ahamad, a worker from the northern Indian state of Uttar Pradesh, says he shelled out the equivalent of about EUR 680 in recruiting fees to an unregistered agency, “Shakti Tread Test Centre,” run by Muktinath Yadav. Yadav did not respond to Unbias the News’s calls or messages to confirm.

When they arrived in Serbia, the Indian workers found that their accommodations consisted of prefabricated containers, with four people cramped in a small room. “We didn’t get proper food, and the rooms were very small,” says Boobalan. “It was very difficult to stay in that cramped place. Human rights organizations visited, even took videos.” In addition to unsanitary living conditions, workers and union members state that there was minimal or no heating in the lodgings.

Since most migrants hailed from warm places in India, like Chennai, they were ill-prepared for sub-zero Serbian winters and paid out-of-pocket for proper winter clothing. 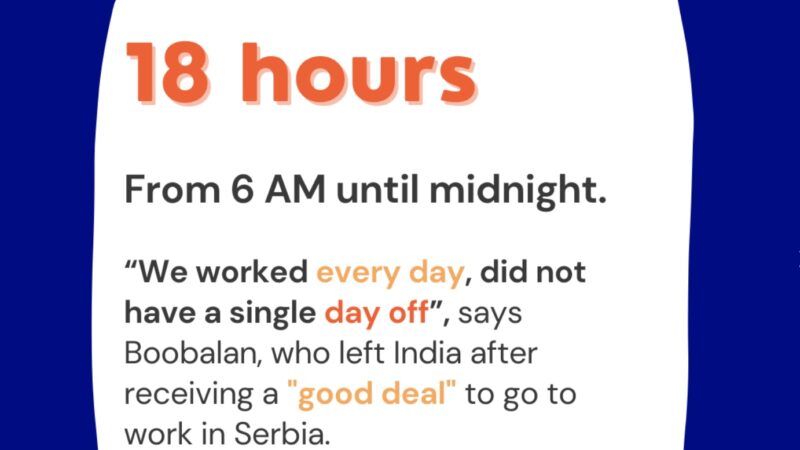 Graphic via Unbias the News. Used with permission.

A report by the Building and Wood Workers’ International (BWI), a global federation of trade unions, which has been directly involved in this case, notes the migrants worked for 10–12 hours a day, and six days a week on average. Boobalan states the maximum he worked was eighteen hours a day, from 6 a.m. until midnight. “We worked every day, did not have a single day off,” he says, adding that when payment issues eventually arose, the company “put it off saying, ‘yes you’ll get it soon, you’ll get it soon,’ and that continued for four months”.

Jasmin Redzepović from BWI describes how his organization learned about the Indian workers at the end of 2019. It was when a member of a Serbian road workers’ trade union noticed a group of foreigners working on the Surčin-Obrenovac road construction project and notified his union. Eventually, ASTRA, a Serbian organization dealing with cases of trafficking and labor exploitation, got involved.

At their office in Belgrade, Srna Ignjatović of ASTRA explains the employer had also confiscated the passports of the group working in Surčin, until the workers took it upon themselves to complain to the police. ASTRA members also visited the accommodation facilities and found the living conditions were abysmal. “It was so cramped and dirty,” she recalls. 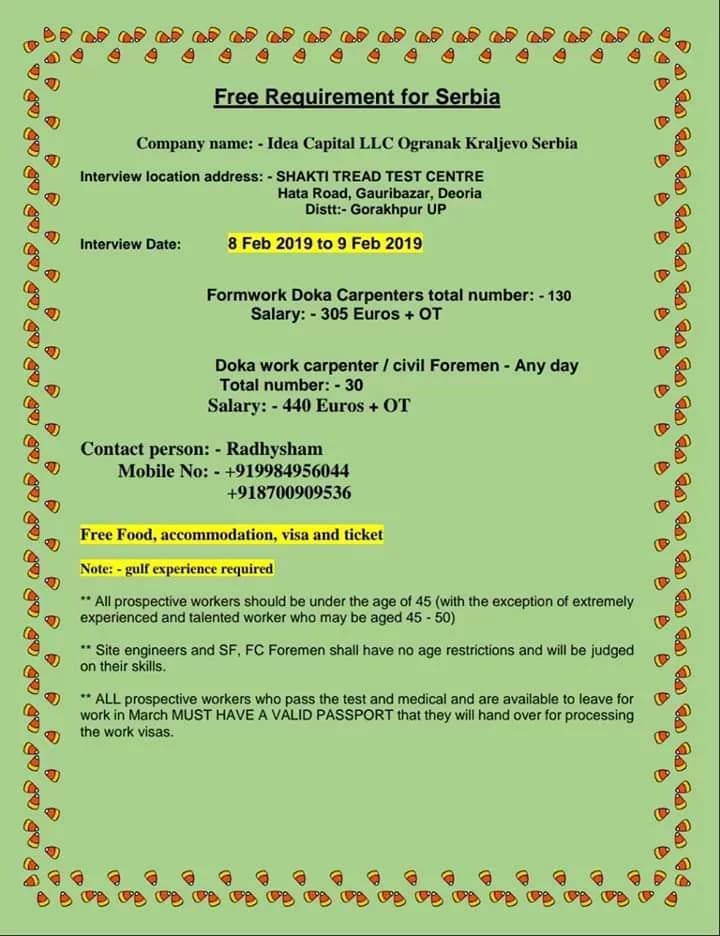 “Every month they had to fight for their salary,” says Ponkumar from BWI-affiliated Thamizhaga Kattida Thozhilalargal Mathiya Sangam (TKTMS). Eventually, the workers went on strike to demand payment, and “the company cut off the electricity and water facility. They were not able to use toilet also,” he adds.

Following the intervention of labor unions, ASTRA, and Indian government officials, the first group of workers from Surčin was repatriated to India in January and February 2020. According to Ponkumar, around 50–70 others, including Boobalan, stayed behind. When asked why they chose to stay, Boobalan explains that, unlike the group working in Surčin, they were still receiving their salaries at this point. However, their troubles with getting paid began soon afterward, compounded by the harsh realities of the COVID-19 pandemic.

Boobalan recounts the ways in which he and his fellow workers tried to get their voices heard. “[The company] didn’t understand our financial distress. They just didn’t respond to us properly,” he says. “We went on strike—sat in our rooms for five days. Then I went to the Kraljevo mayor’s office, and complained at the police station.” 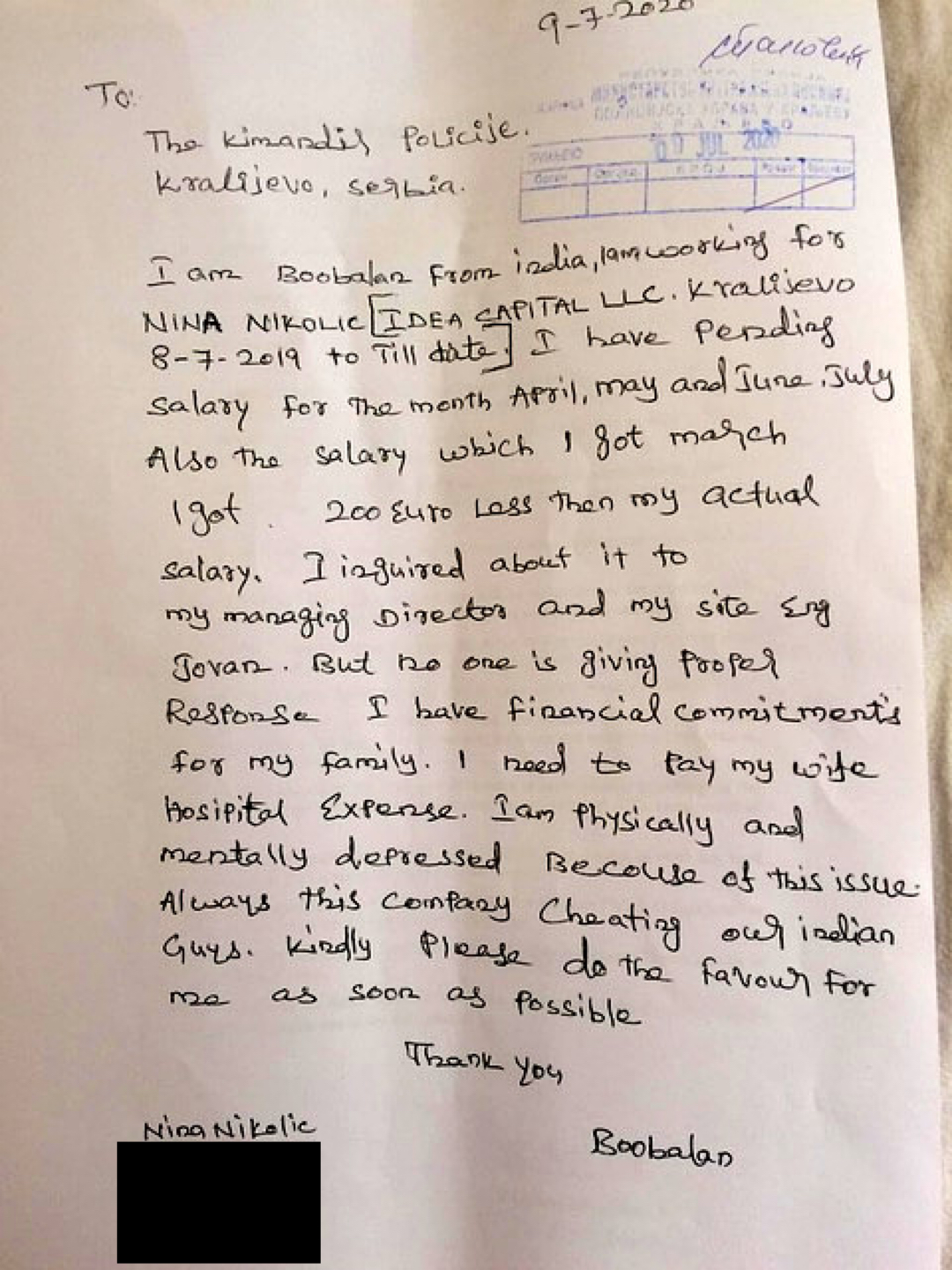 Letter from Boobalan Dhanapal to Kraljevo Police. Image via Unbias the News. Used with permission.

“Finally, we staged a hunger strike in front of the mayor’s office. That’s when the Indian Embassy called and told us to end our strike, and that they will settle the issue.” The workers asked to be paid and sent home. Eventually, they were repatriated in August–September 2020, but without their pending wages.

In a response to the BBC in August 2020, GP Nikolić’s owner Nina Nikolić claimed that there were no issues with the lodgings, that the workers themselves terminated their contracts in March, and that the company does not owe them any money. Nikolić also stated that, despite this, the company was still taking care of their health insurance. However, Boobalan and BWI members note that a worker who had sustained a leg injury neither had access to the healthcare system nor received any support from the employer. “The road union called the health workers’ union, and they got one of their members to treat the worker,” says BWI’s Redzepović.

A January 2020 report by Serbian publication Danas quoted Nikolić as saying that only the November salary was delayed since “our business partners owed us money,” and that the company purchased the workers’ flight tickets and paid them 5000 Serbian dinars each (about EUR 42) for travel expenses. Nikolić did not respond to calls and multiple email inquiries about the allegations against her company.

GP Nikolić, the Serbian company the Indian migrants were working for, is a subsidiary of Idea Capital LLC, registered in Miami, Florida, with a branch in Kraljevo. Documents available through the Florida Department of State website show that Nikolić founded Idea Capital in 2013. She is also the owner of GP Nikolić, a family-owned business founded in 1991 by the late Dragan Nikolić.

Despite working for GP Nikolić, it was with Idea Capital that the workers had signed contracts. They were brought to Serbia by means of a technical cooperation drafted between Nikolić’s two companies.

“This was the major problem in the case of the Indian workers in Serbia because their contract was with a so-called US-based company,” says Jasmin Redzepović from BWI.

Citing this as a reason, the Labor Inspectorate declared that as the contracts were signed with a company registered in Miami, the case falls under the responsibility of the relevant authorities and regulations there. Article 2 of Serbia’s Labor Law, however, stipulates all employees working on Serbian territory are protected by the country’s labor laws.

During the process of repatriation in August 2020, a number of workers signed agreements with the employer, brokered by the Indian embassy. Unbias the News has viewed the agreement. Jasmin Redzepović of BWI says that the company agreed to provide a small sum of money (“too small”), a COVID-19 test, and a flight ticket back to the workers’ homes. In exchange, the workers gave up all claims against the company.

In reality, many of the workers did not receive the full amount (USD 400) stated in the agreement.

Here is a video featuring a conversation with lawyer Raavi Birbal on the relevant Indian laws about the Indian migrant workers and whether there are provisions for protecting their rights if they face violations of their rights outside India:

Meanwhile, in Tamil Nadu, there is a new call, dated July 2021, for workers needed in Serbia. Conditions of the job include 10-hour workdays, six days a week, plus overtime. When asked about the identity of the company looking to hire workers, the agency that advertised the job, Rainbow Consultant, declined to say who it was.