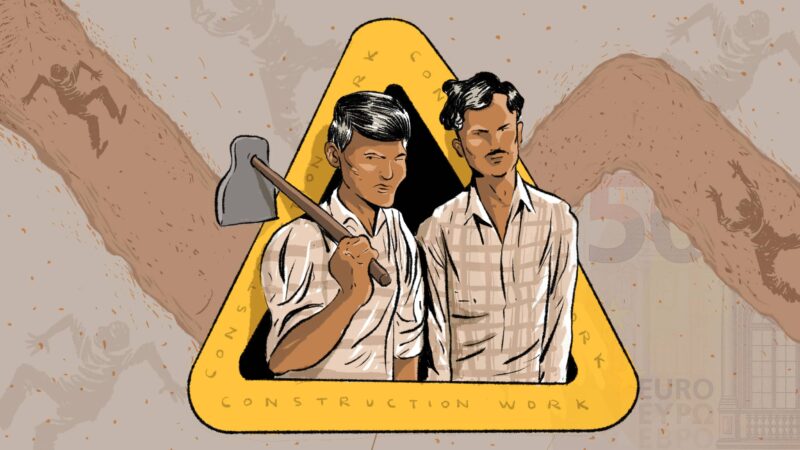 Illustration by Mohamed Anwar via Unbias the News. Used with permission.

This article was originally written by Yamuna Matheswaran, edited by Ankita Anand and published in Unbias The News. An edited version is republished in two parts by Global Voices as part of a content sharing agreement.

Indian migrant workers have been targeted to work at mega construction projects in EU-candidate state Serbia. A group of workers is not willing to give up fighting for their salary, despite the legal loopholes that a company registered in America has used to contract them for work in Serbia.

When Boobalan Dhanapal, 41, arrived in Serbia in July 2019, he was eager to work and send money back home. He was joined by fellow construction workers from Chennai, a coastal city in the southern Indian state of Tamil Nadu. Boobalan, who has a degree in civil engineering, was recruited to work as a construction foreman for a monthly salary of EUR 440 (approx. INR 38,500), inclusive of food and housing. At the time, it sounded like a good deal.

In 2019, over 150 men from various Indian states began working for GP Nikolić, a Serbian construction company, on a number of infrastructure projects across the Balkan country.

These included the Surčin-Obrenovac motorway, the viaduct in Chortanovci, and apartments for military personnel in Kraljevo. Their contracts, however, weren’t signed with GP Nikolić but its parent company, Idea Capital LLC, registered in Miami, Florida. This detail would go on to play a key role in the workers’ struggles and the Serbian government’s response. Notably, both companies are linked to the same person, Nina Nikolić.

All work and no pay

Once in Serbia, the Indian workers say they had to deal with irregular or non-payment of salaries, which ranged from around EUR 320 to UR 500 (USD 363 to USD 567), in addition to what they describe as poor working and living conditions. Boobalan, who worked in Belgrade and then in Kraljevo, says his issues with getting paid began in March 2020, and that he is still awaiting four months’ worth of wages.

“My family faced a lot of troubles when they didn’t receive the money,” he says via Zoom, speaking in Tamil. “It was a struggle to even pay my children’s school fees.”

Boobalan adds his pay in Chennai is INR 35,000 (about EUR 400/USD 454) per month but that in his interview with Nikolic he was told the pay he was being hired at would be increased by EUR 200 (USD 227) in three months. But that never happened. 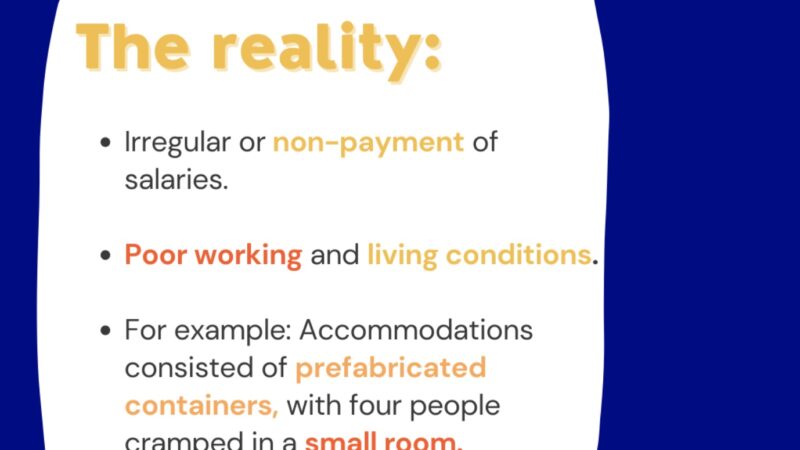 Over 150 men left India to work in Serbia in 2019. This is their reality. Graphic via Unbias the News. Used with permission.

Mukhtar Ahamad, on the other hand, says he stopped receiving his salary of EUR 320 (USD 363) from the third month onwards, and that Idea Capital owes him four months’ worth of back pay. Despite the employer’s assertions that they would get paid, workers say the payments never arrived.

With citizens increasingly choosing to emigrate in search of better opportunities, countries in the Balkans are facing a demographic crisis. Goran Rodić, vice-president of Serbia’s Chamber of Construction Industry, has stated in the past that Serbia is grappling with a serious shortage of skilled and unskilled workers. At the same time, the Serbian government has been steadily acquiring funding for new infrastructure projects that are in need of a workforce.

Obtaining construction permits, too, became significantly easier as a result of the seven-year USAID Business Enabling Project. Serbia is currently the second-largest recipient of foreign direct investment among transition economies, after Russia.

Jasmin Redzepović from the Building and Wood Workers’ International (BWI), a global federation of trade unions, notes workers from the Balkans are increasingly emigrating to the European Union, Western Asia and Russia. At the same time, countries such as Turkey, China and Azerbaijan have been obtaining contracts for projects and bringing their own workforce to Serbia.

“And then you have companies from Serbia, Croatia and other Balkan countries that are hiring workers through some agencies for daughter companies,” he says. “So we have a variety of instances where Indian, even Nepalese and Filipino workers—not [just] workers from Romania or neighboring countries—are entering [the region].” 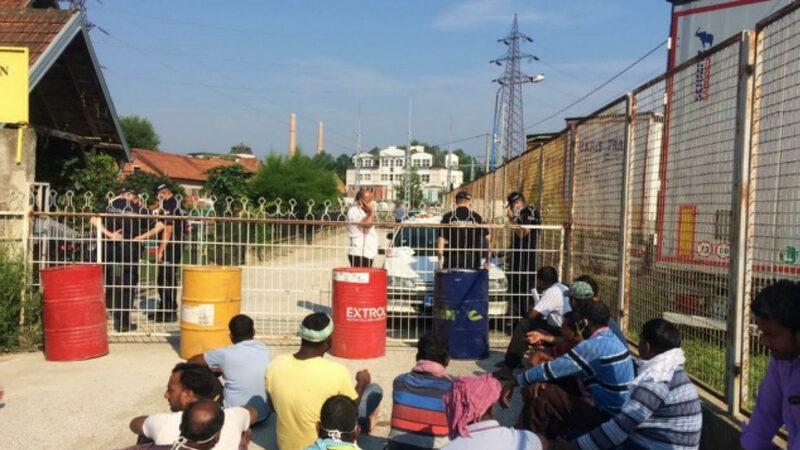 Photo by Boobalan Dhanapal via Unbias the News. Used with permission.

Over the past decade, China has become increasingly invested in the Western Balkans through its Belt and Road Initiative (BRI). Among other sites, the Indian migrants were engaged on the Surčin-Obrenovac section (A2 motorway) of the ambitious Corridor 11 project set to link Belgrade and Bar, Montenegro. The contractor for the Surčin-Obrenovac motorway, of which 85 percent is financed by loans from the Chinese Export-Import Bank, is the China Communications Construction Company Ltd (CCCC). GP Nikolić is one of several subcontractors.

In 2018, the Serbian government signed a bilateral deal with China waiving the application of Serbian labor law for Chinese nationals working in Serbia. In recent times, reports of the exploitation of Chinese and Turkish construction workers in Serbia have been brought forth by the Balkan Investigative Reporting Network (BIRN) and Radio Free Europe respectively.

“There is no political will in Serbia to solve the problem with foreign workers in favor of those workers—on the contrary, foreign labor markets are seen as an ideal source of cheap and completely unprotected labor,” says Mario Reljanović, a research associate at the Institute for Comparative Law in Belgrade.

This is the first part of the report. Read the second part here.