Portraits of a pandemic: Films on the unequal impact of COVID-19 in the Asia-Pacific 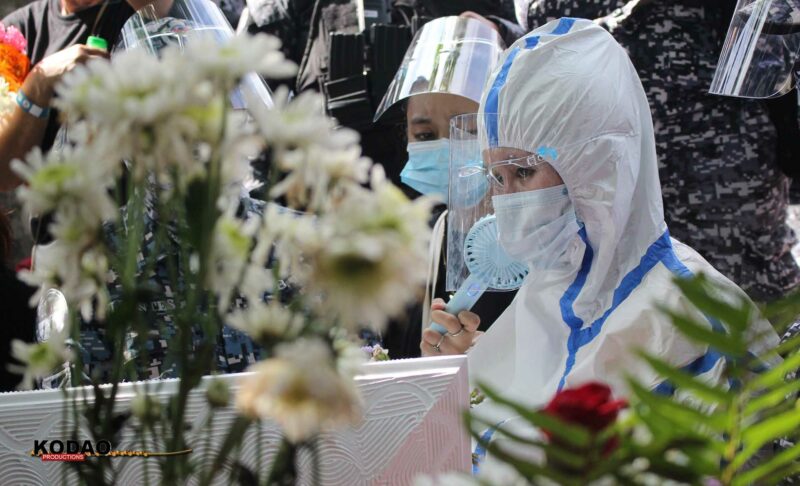 One of the films in the playlist featured Filipino activist Reina Mae Nasino, whose detention and the death of her three-month-old baby became a symbol of political repression in the Philippines during the pandemic. Photo by Kodao Productions, a content partner of Global Voices, used with permission

This playlist is from Cinemata, a platform for social and environmental films about the Asia-Pacific. It is a project of EngageMedia, a nonprofit that promotes digital rights, open and secure technology, and social issue documentary. This is edited and republished as part of a content-sharing agreement with Global Voices.

The COVID-19 pandemic continues to pose huge global and local challenges, greatly affecting groups in vulnerable situations, including frontline workers, people living in poverty, political activists, and indigenous communities. Since the start of the crisis, marginalised groups have borne the brunt of the pandemic’s health, social, and economic impact. As year two of the global outbreak draws to a close, these issues remain unaddressed. It becomes even more necessary to continue capturing and documenting the times we are living in.

EngageMedia curates a collection of short films that magnifies the daily struggles of individuals and communities during these challenging times, and reflects the wide-ranging impact of the pandemic in ways that are both apparent and invisible.

“Portraits of a Pandemic” holds space for stories that portray with care and nuance the effects of the COVID-19 crisis in the Asia-Pacific. The 10 films from the Philippines, Indonesia, Bangladesh, and Cambodia cover stories on a range of human rights abuses during the pandemic, the impact of harsh lockdown measures, curtailment of media, inadequate health care and food insecurity for marginalised communities.

Before stepping into the new year, there is no better time to ask ourselves: How do we move forward from here? How do we rise and build a better society going forward? We hope that these films would encourage people to reflect on the unequal impact of the pandemic on various segments of society, and inspire collective action and advocacy.

Check out these films:

Through fragments of black and white images, poet and photographer Asma Beethi reflects on isolation, confinement and life during the pandemic.

“Inside Out” is part of the “Tong Isolation Diary” series featuring works from filmmakers from Bangladesh as they portray different characters and their lives in the COVID-19 pandemic. The film has also been released in a UK-based online film festival called “Once a Week.”

Philippines: Nasaan sila, Nasaan ang Virus? (Where are they? Where is the virus?)

Facing discrimination and relying on the kindness of strangers, a group of indigenous Badjao in an Agusan del Sur town in Mindanao island, Philippines, struggles to survive the pandemic as quarantine measures are heightened.

“Nasaan sila, Nasaan ang Virus?” means “Where are they? Where is the virus?”.

Indigenous people like the Badjaos face disproportionate risks during health emergencies, prompting them to seek their own solutions and rely on traditional knowledge and practices to survive.

With the theme Bilang Nilalang (Reduced to Numbers), The 4th Quisumbing-Escandor Film Festival for Health highlights the stories and experiences of Filipinos during the COVID-19 pandemic.

Tuniyah worked in a company that produces asbestos products for many years. The company did not require its workers to wear the respirator masks appropriate for asbestos exposure. In 2004, she was diagnosed with asbestosis. With the spread of COVID-19 in Indonesia, victims like Tuniyah are at high risk.

Filmed during the lockdown by their co-workers, family members, and the survivors themselves, Victim Diaries documents the situation of occupational and environmental victims under the pandemic.

Philippines: River of Tears and Rage

Women's rights activist Reina Mae Nasino was arrested by Manila police on suspected trumped-up charges a month into her pregnancy. In one of the world's most crowded prisons, Reina endured a difficult pregnancy and gave birth to River Emmanuel. Local courts turned down pleas to allow mother and child to stay together. Denied her mother's care, baby River died at only three months old.

“River of Tears and Rage” is a film culled from Kodao Productions’ Facebook Live coverage of baby River's wake and burial. Amid a raging coronavirus pandemic, a dead three-month-old infant became a symbol of political repression by a regime denounced worldwide for its crimes against the people.

In a strange world, Ronnie, a talented dancer, forgets his name and realises his identity was reduced to a set of numbers. Amidst ill-planning by Philippine health authorities, he and his lover struggle to come to terms with the devastation caused by COVID-19.

Cambodia: Gone and Back

As the COVID-19 pandemic continues to affect Cambodia, a father joins a birthday celebration with friends without taking precautions, possibly putting the safety of his family at risk. Gone and Back is a timely short film produced by Sunflower Film Alliance (a volunteer team operated Sunflower Film Organisation) that reminds viewers about the perils of ignoring health protocols during this public health crisis.

Through JP’s narration, we get a glimpse of the collective histories and experiences of the voiceless that are struggling to survive the onslaught caused by both the pandemic and a nation state that is indifferent to the people’s collective sufferance.

“Yawyaw ni JP” (Murmurs of Discontent) encapsulates the lamentations, rants, and bewilderment of the marginalised enmeshed through the narrative voice of its central character, JP. In a society where freedom of expression is suppressed and the culture of impunity thrives, acts of murmuring serve a social purpose — they lead the disenfranchised and disembodied towards liberation and social emancipation.

Philippines: So Masa o Paniyakit- Beyond the Frontlines of Amai Pakpak Medical Center

During the early days of the pandemic, in a city recovering from the wrath of a siege, confusion arose while fake conspiracies and hearsay caused panic and mass hysteria, particularly in the Amai Pakpak Medical Center. This is the story of health workers of Marawi, a province in the Southern part of the Philippines, and the near-death experiences from misinformation amidst the COVID-19 pandemic.

Almost two months into the enhanced community quarantine in Luzon Island, uncertainty and fear loomed over the streets of Manila as dissatisfaction with the Philippine government’s COVID-19 pandemic response grew. President Duterte continued to threaten quarantine violators and critics of his government, and was called out for human rights abuses stemming from the lockdown.

Against this backdrop, video journalists like JL Burgos take risks and pursue stories from marginalised communities to create films that call for a better society after the pandemic. JL is a video for change practitioner who uses video to contribute to social change.

“Ngayon ang Panahon” is an anthem against the rise of tyranny and the intensifying fascism in the Philippines amid the COVID-19 pandemic. It is also a response to the recently enacted Anti-Terrorism Law that threatens to curtail the basic rights and freedoms of Filipinos, especially those critical of the government.

Written and produced by Ean Aguila (Ang Bandang Shirley), Jam Lorenzo (The Geeks), and RJ Mabilin (The Axel Pinpin Propaganda Machine), the song is a massive collaboration of over 30 musicians from different groups in the local indie music community.

“Ngayon ang Panahon” calls on the Filipino people to act and let their voices be heard against oppression and injustice.