The deportation is a consequence of a press conference 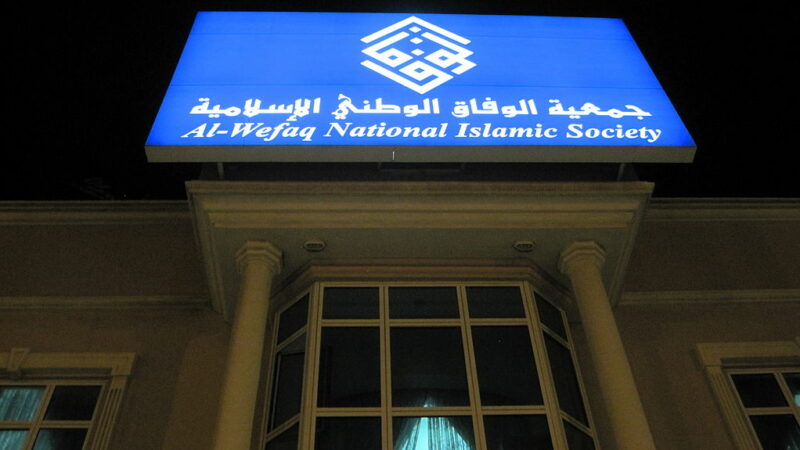 Once an authorized opposition group whose members got elected as lawmakers, Al-Wefaq [is this the name?] Society members are now being punished even outside Bahrain for calling for political reforms and human rights. Image used under CC BY-SA 2.0.

This article was first published by Raseef22 on December 17. A translated and edited version is being republished under an agreement with Global Voices.

Merely a week after Bahraini authorities protested a human rights conference that was organized by the Bahraini opposition Al-Wefaq Society in Beirut, when Lebanese Minister of Interior Bassam al-Mawlawi ordered the deportation of its non-Lebanese members of the society.

According to the interior minister's media office, his request came due to Al-Wefaq's press conference, held on December 11, being an “offense to Lebanon’s relationship with the sister Kingdom of Bahrain, [that] caused harm to the interests of the Lebanese state.” Prime Minister Najib Mikati also asked the Office of the Public Prosecution to “immediately investigate” the conference, following Bahraini authorities’ official protest in this regard.

In a statement by the Bahraini Ministry of Foreign Affairs, the country expressed its “deep regret and denunciation that the Lebanese capital, Beirut, hosted a press conference by elements classified as hostile, and supportive as well as sponsors of terrorism, for the purpose of broadcasting and promoting abusive and malicious allegations against the Kingdom of Bahrain.”

Al-Wefaq  Islamic National Society is the largest Shiite opposition group in the tiny kingdom, but was dismantled by a court order in 2016, accursed of disrespecting the law and being an “incubator for terrorism, extremism and violence” — allegations that its members denied and international human rights groups saw as intensified crackdown on dissent in the country. Since 2011, Al-Wefaq has played an instrumental role in protests calling for political reform in Bahrain, which prompted a Saudi-led force to intervene to quell the demonstrations.

At the conference, Al-Wefaq organizers spoke, as they regularly do, about human rights violations that opposition members and human rights defenders faced in the kingdom in the preceding two years. Since Bahrain's version of the Arab Spring erupted in February 2011, the society has been holding these press conferences in Beirut.

While the society rejects claims that it seeks to overthrow the ruling regime in Bahrain, it does call for political reform, amending the constitution, increasing parliament's power, and making the people the source of authority instead of the ruling family.

Commenting on this, Al-Wefaq told Raseef22: “The issue is internally Lebanese.” Raseef22 tried to communicate with a number of its members, even those outside Lebanon, but they refused to make any statement.

Head of the Bahrain Forum for Human Rights, Baqir Darwish, told Raseef22 that the decision “is a violation of Article 19 of the Universal Declaration of Human Rights,” adding that:

The Bahraini authorities continue to create political repression, and exports forms of this repression outside Bahrain's borders, through security hunts, as the authority that cannot tolerate some letters on Twitter wouldn't stand scenes from a press conference addressing its grave violations, even if it was from outside Bahrain.

On December 13, Human Rights Watch issued a statement calling for the release of “everyone imprisoned for exercising their rights to freedom of association, peaceful assembly, and expression, including human rights defenders, opposition activists, and journalists.”

The Lebanese government's awareness of the possible forcible transfer of the association's members to the Kingdom of Bahrain, or its tacit acceptance of it, constitutes a grave violation of the principle of non-refoulement. The commission said in a press statement: “The Convention against Torture, in which Lebanon is a signatory, prohibits compulsory expulsion.”

A member of the commission told Raseef22 that “the Minister of Interior took his decision in light of the silence of other government agencies, most notably the Ministry of Justice,” noting that there is no government agency specialized in human rights issues to be consulted on this issue.

In comments made to Raseef22, Amnesty International noted that “Al-Wefaq Society was a legal and licensed opposition in Bahrain, and held seats in the legislative assembly for many years, that the Bahraini authorities even negotiated with it a number of human rights issues.”

Devin Kenny, from Amnesty, also told Raseef22, that “remarks that are not in line with the interests of the government, or deemed hostile to relations between governments, criticizing governments on the basis of human rights, and holding press conferences; these are all activities that fall under internationally-protected freedom of expression.”

All these activities, he added, do not constitute a valid reason to deport anyone, and those deported will be subjected to serious human rights violations if they are arrive to Bahrain. Kenny further said that the Lebanese government's decision to deport Bahraini opponents, because of their critical expression of opinion on the Bahraini government, “contradicts its obligations under international law.”

The decision to deport members of the Bahraini opposition is a precedent in Lebanon, and may be passed on to other Arab opponents. In this regard, Ali Yahya, a journalist specializing in Gulf affairs, told Raseef22:

The decision of the Lebanese Minister of Interior violates several standards and laws. It initially violates Lebanon's historical role as a headquarters for Arab opposition movements, and violates the Lebanese constitution, which emphasizes the protection of freedom of opinion and expression, and not to punish anyone because of their opinions and beliefs.

This unprecedented incident comes not only amidst a Lebanese-Gulf crisis, resulting from critical comments made by Lebanon's former minister of information George Kerdahi on Saudi Arabia's role in the war in Yemen, but also in the context of an ongoing process of prosecutions against activists and journalists that increased in frequency after the October 17, 2019 uprising. Some of those activists were asked to appear before the military court on accusations of committing so-called “crimes” that took place years ago.

This happened with activist Tawfiq Braidy, better known as Tufalik, when the security authorities at the airport confiscated his passport. After Braidy appeared before the Public Security Information Division for investigation on December 14, he was told that he was accused of insulting the Lebanese passport and offending the Presidency of the Republic, because the passport was issued in its name.

During this year, the Beirut-based Center for Media and Cultural Freedom documented more than 71 violations of freedom of expression and the press in Lebanon, with a remarkable increase in recent months.

On December 8, the Lebanese General Security released the American journalist, Nada Homsi who was held for 23 days although the Prosecution office  ordered her release, which was rejected by the General Security Directory. On November 26, the military court sentenced journalist Radwan Mortada in absentia to 1.5 years in prison over accusations of “disparaging the military establishment” after he held the Lebanese army responsible for the Beirut port explosion.

Last August, Reuters announced that the Lebanese General Security had deported its correspondent in Jordan and Syria, Suleiman Al-Khalidi, to Amman, after questioning him upon his arrival at Beirut airport on a press assignment. They also asked him to hand over his computer and mobile phone, but he refused.

Once viewed as the Arab world's most liberal country for having a higher tolerance to dissent and harbouring pan-Arab opposition figures fleeing oppression in their homelands, Lebanon's horizon for freedoms and rights keep shrinking amidst prolonged political crises.