The Turkish Lira continues to lose value at a breakneck pace 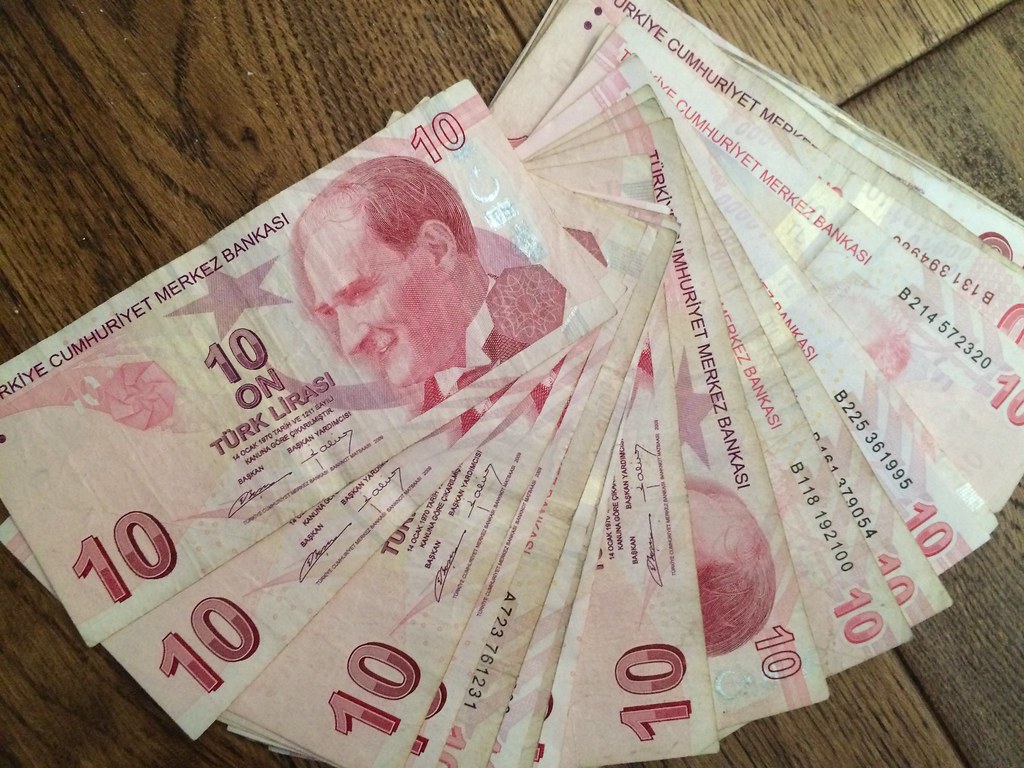 ‘Spiral Of Turkish Lira’ by jeffdjevdet, on Flikr (CC BY 2.0)

“Türkiye is the breakout star of the global economic system that is being restructured with the pandemic,” declared Turkey's president, Recep Tayyip Erdoğan, on December 8. A week later, the lira (TRY), the country's national currency — which was already spinning out of control — tumbled past 17 versus the US dollar. The most recent decline followed the Turkish central bank's fourth interest rate cut in four months.

After the central bank's move, and in what is believed to be an attempt to boost support from his voter base, Erdoğan announced a 50 percent hike in the minimum wage. The monthly net minimum salary will be TRY 4,250 (USD 275) as of 2022. The current minimum wage is TRY 2,826, a figure that converted to USD 380 at the start of the year but has fallen to USD 186, with the lira’s 51 percent depreciation, as reported by online newspaper Gazete Duvar English. On December 17, the minimum wage decreased by another USD 10 according to Gazete Duvar English.

In an interview with The Guardian, Gunay Akil, an Istanbul resident said, “Everything is expensive right now, we barely make ends meet. My family has moved in with my father-in-law to avoid paying rent.”

Financial analysts say, that due to the steep inflation increase, which recently passed 21 percent, the new minimum wage will hardly accommodate rising costs for basic goods and products. Economists are predicting that the inflation rate will jump to near 30 percent next year because of increasing import prices.

Marek Drimal at Societe Generale said in an interview with Reuters that the increase “will fuel inflation pressures further, together with the cumulative impact of the lira's weakness.”

On December 17, “Turkey’s benchmark Borsa Istanbul 100 index sank 8.5% Friday in its worst day since March, triggering two circuit breakers that halted trades,” according to the Wall Street Journal. The same day, the lira plunged past 17 to one US dollar, the lowest point ever.

On December 18, Turkey's largest business group, TUSIAD urged Erdoğan's government “to abandon a monetary policy based on low rates that has prompted a crash in the lira,” and called for “a return to rules of economic science.” The group added:

As a result of the instability we have been experiencing in recent times, it has become clear that goals under this economic programme that [are] being attempted will not be achieved.

On Sunday, December 19, President Erdoğan responded to the letter as an “attack on the government,” adding, “our government's economic policy is advancing exactly as we determined, apart from temporary volatility in exchange rates.”

Seeing their national currency lose value so drastically, some Turks took their frustrations to Twitter, where dark humor eased some pressure.

On December 19, in a televised comment, President Erdoğan pledged to continue lowering interest rates as required by nas, an Arabic word for Islamic teachings. “We're lowering interest rates. Don't expect anything else from me. As a Muslim, whatever (Islamic teaching) requires I will continue to do that,” he said vowing to lower the inflation rate back to 4 percent. Currently, the inflation rate is hovering around 21 percent and economic analysis predict it will reach 30 percent next year.