"This is Hongkongers’ way of saying 𝐍𝐎 to this election" 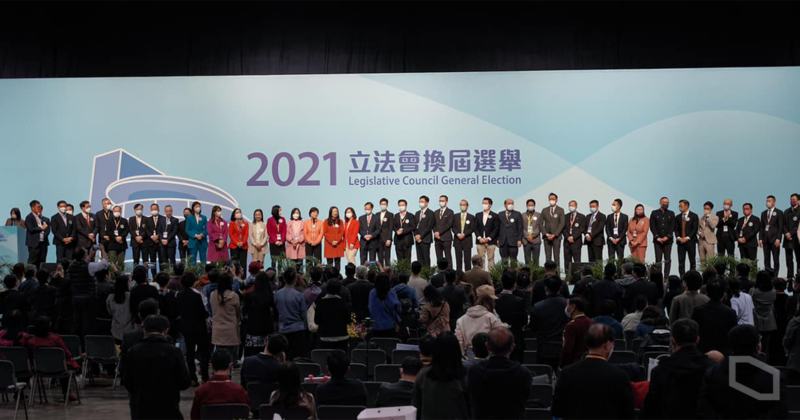 Electoral rules imposed by Beijing on March 5 2021 barred all opposition parties from running in the elections; thus, as anticipated, the pro-establishment parties took all the 20 seats in the 10 district direct elections.

The new patriot-only Legislative Council is composed of 90 seats, of which 20 are directly elected, 30 are elected from functional groups, and 40 are mutually elected among the 1,500 members in the election committee.

Despite the crackdown on election boycotts, only 30.2 percent among the city's over 4.4 million registered voters took part in the direct election on Sunday. The turnout rate is the lowest since 1991 when Hong Kong had its first direct Legislative Council election under the British colonial government.

The lowest turnout since 1991

Among all the 1,350,680 votes cast, more than 27,000 are invalid, about 2.04 percent of the total — the highest invalid voting rate in the city's direct election history. David Webb, a share market analyst and retired investment banker, sums up the result in a table and points out on Twitter that the actual voting rate is less than 30 percent: 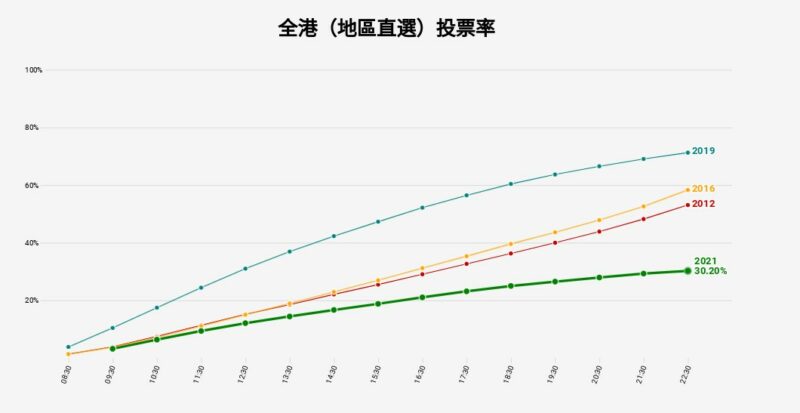 The 2021 turnout rate was 41 percent below the 2019 District Council Elections when a majority of pro-democracy candidates won 86 percent (389 seats) of the total 448 seats. The turnout also dropped by 28 percent compared with the 2016 Legislative Council Elections when the pro-establishment camp won the most votes.

When deducting the number of invalid votes and votes that support the independent and pro-democracy candidates, the pro-establishment party drew about 1,260,000 voters, which is 50,000 more votes than their count in 2019. Yet, given that there has been a net increase of 340,000 registered voters in that time, the 50,000 surplus votes only constitute 15 percent of the first-time voters.

To facilitate mainland China-based voters to cast their ballots, in an unprecedented move, the Hong Kong government set up three border polling stations wherein more than 17,500 votes were collected. The arrangement is highly controversial as members of the public and media were not allowed to monitor the voting process, leading some to believe that it would facilitate vote mongering. As seen from a screenshot of a news report from TVB, the city's most popular free-to-air terrestrial television channel, posted by Twitter user Chris Fung, some border voters wore a standardized red mask with a bauhinia flower on it when they cast their ballots:

Look at this TV update on FAKE election of HK …… Voting at border without verification ? all border's “voters” have the same CCP mask ….#CCPChina is really PUSHING for %, all CCP enterprises forced staff to vote… Ridiculous.#ReleaseMyCandidate @SolomonYue @lukedepulford pic.twitter.com/iPgFwUn3G8

Where have the voters gone?

Chief Executive Carrie Lam described the ballot as a “vote of confidence” for Hong Kong's new electoral system and the city's future when she cast her vote on election day.

As part of the measures to boost the turnout rate, the Hong Kong government offered free public transportation to all citizens. Yet, instead of going to the polling stations, many took the opportunity to travel around the city. 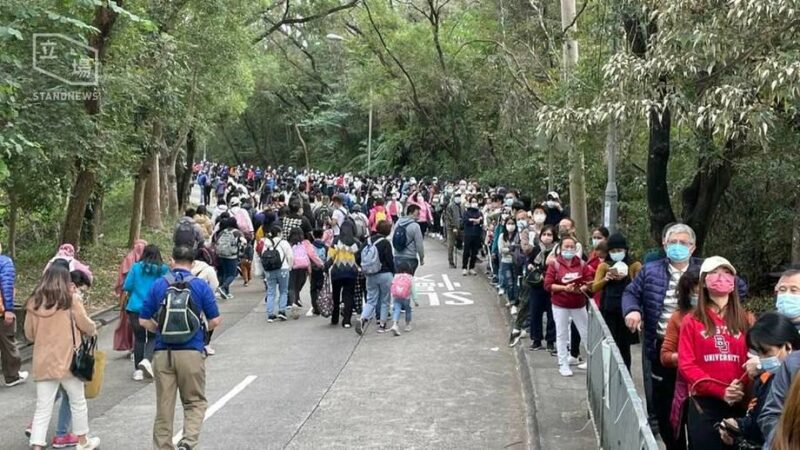 Crowds at Tai Tong walking trail on the December 19 election day. Image from the Stand News. Used with permission.

While long queues could be observed in subways and bus stations all around the city, the majority of polling stations had very few people. In one of its election reports, Stand News compared the queues outside various polling stations in 2019 and 2021.

@Stand_with_HK, a Twitter-based activist account, compared two photos capturing scenes outside Tuen Mun polling stations in 2019 (left) and 2021 (right) and interpreted the record low voting rate as a form of protest against the “patriot-only” election rules:

This is Hong Kongers’ way of saying 𝐍𝐎 to this election, this regime, and this “democracy” https://t.co/lVh6NOV2AQ pic.twitter.com/WrfComlMJQ

State-run media outlets, on the other hand, saw the elections as a great success. For example, the state-owned China Daily headline is “HK gripped by election enthusiasm.”

I actually LOL'd and wondered when Hong Kong got a satirical news website that was actually funny. Then I realized that it was China Daily and LOL'd even harder. h/t @docmartinhk https://t.co/AbXwOWSrv8

Hong Kong-based state-funded Takung Pao used the 98 percent voting rate of the 1,500 voters only election committee constituencies to prove that the patriot-only elections had “made history.”

#CCPChina propaganda claimed that it was 98% voting rate on this LegCo General Election on 12/19/2021 whereas it was actually less than 30% of voters (1.3 voters out of 4.4 registered HK voters). Shameless lies! pic.twitter.com/mA1wVKwWUv

Human rights activist Johnson Yeung from Amnesty Internation believes that China is taking Hong Kong as a testing site for its version of despotic democracy: