A certificate for grazing cattle: Empowering Bolivia's Aymara people by recognizing their work

The certification process offers a new perspective on production 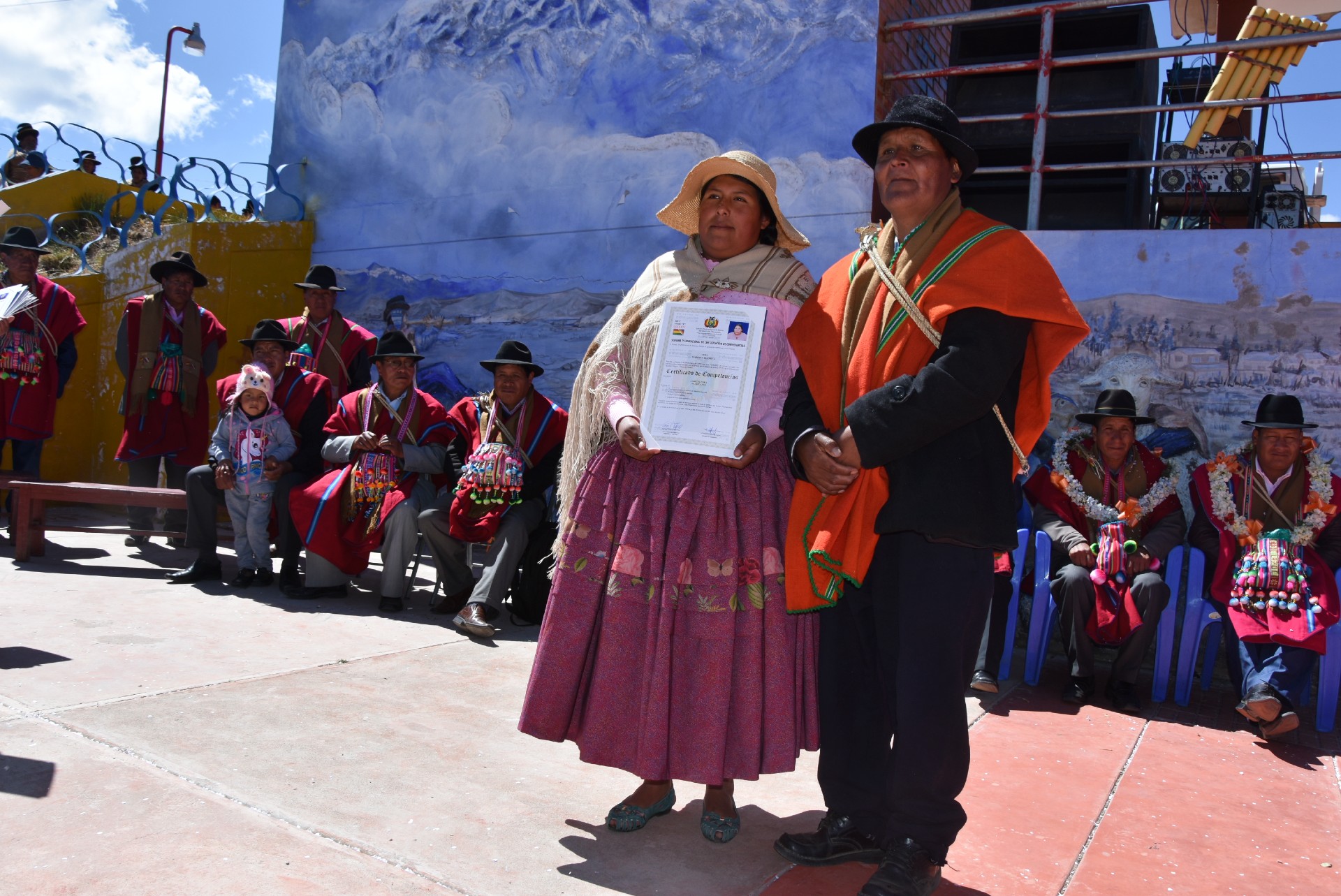 Photo taken by Ruth Quispe Mamani on August 13, 2021 in Walata Chico, Bolivia, during a certification ceremony for Elias Hilari Mamani, a Walata resident and native authority. Photo used with permission.

In Walata Chico, an Aymara community near La Paz in Bolivia, elder Bernabé Mamani asked one of the technicians in Aymara during a ceremony to award certificates of competence: “jilata, jichhat uksarux titulunikit uywanakx awatxañäni?” which in Spanish means “Brother, this means from now on we will only graze cattle if we have a certificate?”

In September 2020, the Ministry of Education officials announced that from 2008 to August 2021, 68,106 certificates had been issued to people in Bolivia who had never received a formal education but had gained many years of experience in various occupations. In Walata Chico, most people are engaged in agriculture, grazing, trading, making native musical instruments, weaving, and selling and preparing medicinal herbs, among other activities. The certificates are a fair recognition of their work.

Bolivia is a multinational state with several Indigenous communities, such as the Aymara, Urus, Chiquitanos, Guarani, and others, with approximately 62.2 per cent of the population identifying as Indigenous. The Aymara nation has about three million people who live in Bolivia, Peru, Chile, and Argentina.

Although it may seem unusual to award certificates to people who have never had any academic degree, I argue that the certificates contribute to empowering vulnerable populations. 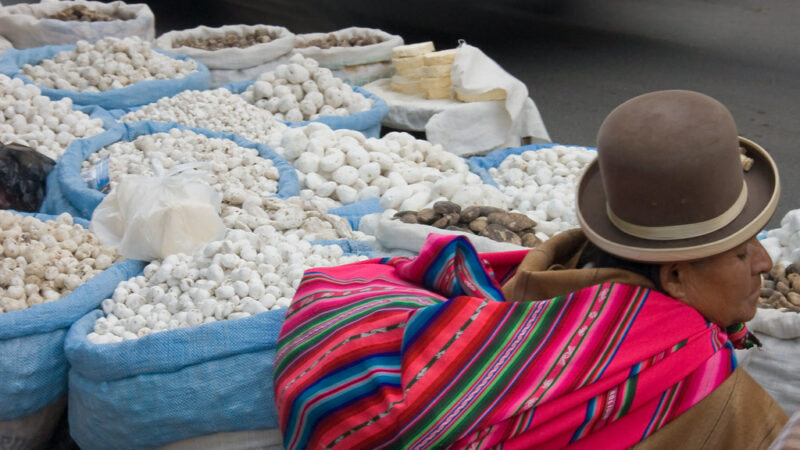 First of all, these certificates help improve the communities’ self-esteem by valuing the experience the people have gained in life. Moreover, with these certificates, the residents can access jobs, establish different associations, and apply for bank loans.

The Indigenous peoples have only been able to attend school since the Bolivian National Revolution of 1952, and they still do not have access to technical higher education in their communities. Those who want to study have to migrate to the city or travel to distant places. A high percentage of the Aymara population and other native nations did not attend technical or higher education schools and centers but have acquired knowledge and experience.

This type of program exists not only in Bolivia but in several countries in Europe, Latin America, and other continents. In many of these countries, these certificates are awarded from a capitalist perspective, as they only focus on employment in a company and on the employer-worker relationship. Meanwhile, in Bolivia, the certification system has its own approach and benefits the entire population that has been excluded in its own country for centuries. For example, there is no such direct employer-worker relationship in awarding certificates in the Walata community, although this does not preclude certification in many places for work. 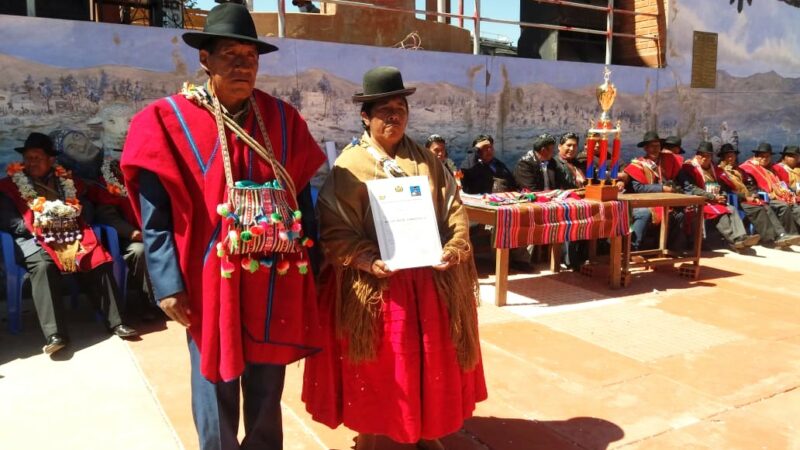 Our view on production

From our perspective, production does not only refer to something material, as in other countries where modern civilization considers a product only something that is tangible. Production is actually creation, both material and intellectual, for example, the production of a chair and also poetry.

The Bolivian Education Law emphasizes that education is:

productive and territorial, oriented to intellectual and material production, creative work and the harmonious relationship of life systems and human communities on Mother Earth, strengthening the territorial management by indigenous farming nations and peoples, intercultural communities and Afro-Bolivians.

This law points out that educational practice is based on harmony with living systems and communities to”live well.” This is an Andean concept that focuses on the harmonious balance of the human being with the community, nature, spirituality, family, mind, and body.

The certification process allows a community that was valued before colonization to be revalued in order to be self-sustainable and for the reproduction of “life systems.” This living and inhabited space is the space where jiwasa (us), a human collective, defends and reproduces the life of living beings and nature. In this sense, the economic and political work supports the ownership and valorization of humans.

It is a vital and strategic space to build social and territorial subjects, which is important for the empowerment of the original peoples, who have been excluded in many ways since the invasion of the Spaniards and up to the present time. 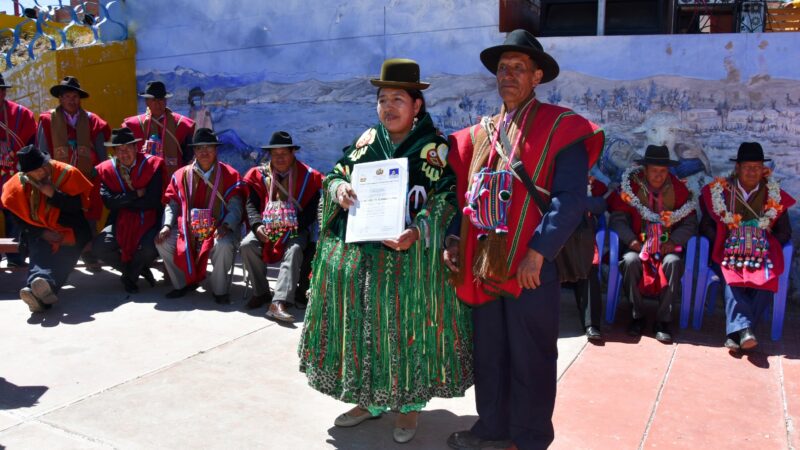 The Regional Plans for Productive Education are also being developed based on the experience of the Ayllu school in Warisata, which integrates the school and the community for production aimed at living together in the community. It is a project that many educational social spaces want to apply, but its feasibility and implementation have not yet been achieved. The multilingual intra- and inter-cultural approach is another characteristic of the educational model that has yet to be fulfilled.

The certification process integrates the territory, its vocations, productive potentialities, and cultural identity, which refers to the way people understand production and social mobilization. This is why we use the word jiwaspacha, which means empowerment, or “ourselves.”