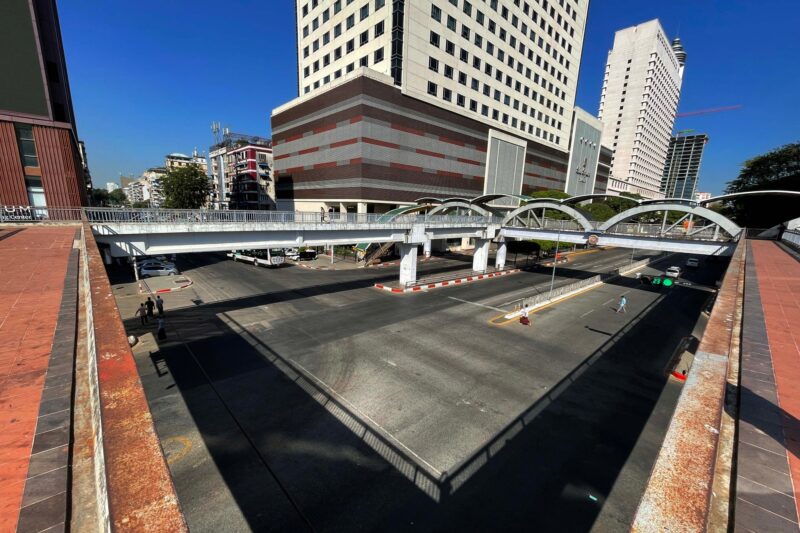 For several hours on December 10, millions of people in Myanmar remained inside their homes as part of a ‘silent strike’ against the military regime. Major cities, including the capital Naypyitaw, looked like ‘ghost towns’ as businesses closed down while workers chose to stay at home.

Ever since the military grabbed power in February, citizens have been challenging the junta rule through a civil disobedience movement. The ‘silent strike,’ organized for International Human Rights Day, was the latest act of resistance by concerned citizens and activists calling for the restoration of civilian rule.

The Irrawaddy news site described the situation in the country’s premier urban centers during the ‘silent strike’:

Roads in cities across the country, including the commercial capital Yangon, the second-biggest city Mandalay and the administrative capital Naypyitaw, were deserted as people stayed home and shut down their businesses to join the strike.

Small vendors, local wet markets and wholesale markets were no exception, having shared the call to strike by word of mouth in the preceding days.

Shots from @AP of Yangon and Mandalay today: the cities are like ghost towns as people heed the call for a “silent strike” against the military rulers. pic.twitter.com/pDD0rNVyno

I feel bad now that I couldn’t do anything for the young people who are risking their lives fighting back against the junta and, therefore, I am taking part in today’s protest.

Young people think we have lost interest in their cause. I’m here to show that my blood hasn’t run cold yet.

Deserted Yangon on Silent Strike Day: Roads that are normally busy in Myanmar's commercial capital Yangon are deserted on Friday morning, with many businesses closed and only a handful of commuters, as a show of solidarity with the “silent strike” movement. 1/2 pic.twitter.com/Y3OO9h2Jqa

We’ve been handing out pamphlets around Yangon, but many people knew about the strike before we even told them. Some shops have already announced that they won’t be opening or selling anything on December 10.

Everyone is very angry. The regime has just crossed so many lines.

We called on people to strike from 10 a.m. to 4 p.m., but everything shut down since the early morning—even I myself feel shocked at the unity of the people. If we are united in this way, our revolution will prevail.

Wai Yan, a protest leader, added that the strike has once again demonstrated that the military has failed to gain legitimacy after 10 months of being in power.

The people showed that the revolution and popular defiance of the military council have not lost momentum.

Even political prisoners decided to hold a hunger strike in support of the December 10 nationwide protest:

Let's not forget our comrades locked up inside prisons by Minaunghlaing Armed Group (MAG) in Myanmar.

They were tortured & confined solitarily for that👇 pic.twitter.com/dcKWKMb60P

Political analyst Naing Khit underscored the significance and impact of the strike:

Usually, Friday is one of the busiest days of the week for public offices, companies and banks.

But today was no ordinary Friday. Myanmar and its population of 55 million people went into a kind of political “hibernation” under their own roofs for almost the whole day. And their decision to do so was indeed political, because their sole objective was to demonstrate their rejection of military rule.

Authorities tried to persuade vendors to open shop in the morning, but these efforts largely failed across the country. In Yangon, dozens of pro-military supporters staged an assembly to counter the ‘silent strike.’

Legions of (roughly 50) pro-military supporters protested outside of Yangon City Hall today, in a counterbalance to the Silent Strike observed by tens of millions of people throughout Burma. pic.twitter.com/y6wCoBBDWe

This video from Radio Free Asia provides an overview of the ‘silent strike’ and the organized applause at 4 p.m. on December 10 as citizens cheered about the success of the protest.