The answer to addressing climate impact is to regenerate the most important ecosystem of all: the soil

Agriculture is one of the largest contributors to climate change but it can also be one of the most significant solutions. Photo by Zachary Barton via the Nepali Times, used with permission.

This article was originally written by Zachary Barton and was published in the Nepali Times. An edited version is republished by Global Voices as part of a content-sharing agreement.

As a farmer and educator living in Nepal, I was not part of the dialogue at the UN climate summit (COP26) that concluded in Glasgow in November 2021. None of us here were.

And as world leaders, climate scientists, and corporate lobbyists return to their respective countries from Glasgow, here in the mountains of eastern Nepal I myself wonder what, if anything, have they accomplished in terms of real change? And what the implications will be for “the rest of us.”

I wonder if these state bureaucrats and business representatives are the right people to look to for guidance and innovation to address the climate catastrophe? Which voices are clearly represented at the table? And which are conspicuously absent?

The Nepali delegation has already returned home setting itself ambitious targets and timebound pledges to achieve them. Nepalis have to cope with the impact of climate change, for which farmers here were not responsible. Yet, we are asked to implement solutions that, similarly, come from afar.

Agriculture is part of the Himalayan landscape. How we manage land will determine how resilient we can be to climate change. Photo by Zachary Barton via the Nepali Times, used with permission.

This is not to say reforestation, net-zero carbon emissions, and providing some level of protection and support for vulnerable populations are not important. In fact, they are precisely what Nepal (and all other countries) should be working towards to minimise the impact of climate change. The real questions are: How? Who should get it done? And on what scale?

Solutions at conferences such as COP26 invariably tend to lean towards high-tech possibilities, international policy agreements, and large-scale restructuring. There is, however, another approach: small-scale, local, and grassroots agriculture.

While local regenerative agriculture is rarely discussed at the high table, such an approach may prove to be much more in line with Nepali culture and economy—a home-grown solution that returns political agency and innovation to local people on the ground.

Healthy soil grows healthy plants which leads to healthy humans and communities. It is the basis of all civilization and life on earth. Photo by Zachary Barton via the Nepali Times, used with permission.

Agriculture has become something of a dirty word for climate activists, and with some justification. It is estimated that agriculture accounts for roughly 23 pre cent of greenhouse gas emissions worldwide. That makes it comparable to big industry, transportation and electricity production, which means it significantly contributes to climate change.

How we relate to land today is our most egregious lapse in judgement. Whether it is razing jungles for timber, draining precious wetlands, overfishing sacred waters, or converting grasslands to large-scale, chemical-based agriculture, we seem to have forgotten the most basic natural law: reciprocity. We cannot extract and drill and harvest and mine with no thought of giving back.

Fortunately, there is a way to approach agriculture that maintains a reciprocal relationship with the local ecosystem. Agroecology, to put it simply, is farming that incorporates the principles of ecology so that agriculture becomes a means of giving back.

A local jungle is a source of natural foods, medicines, fibres, and energy sources, but instead of automatically clearing and putting it to the plough, we must recognise that it also cleans and conserves water, soils, regulates temperature, and provides a habitat for other living beings. And, to circle back to climate concerns, importantly, that jungles capture carbon.

Managing land, under the auspices of agroecology, entails revitalising a different kind of relationship with the soil. It starts with understanding the principles of ecology and how nature works. Diversity, recycling, systems thinking, interconnectivity, and that the sun is the ultimate source of energy, are just a few.

Almost Heaven Farms is a full-fledged permaculture training and design firm focusing on developing agroecology across Nepal. Photo by Zachary Barton via the Nepali Times, used with permission.

What does that look like on a farm? A diversity of plants being grown together in what is known as a polyculture, animals moving across the landscape as happens in nature.

An integrated growing system including tea gardens, vegetable production and forest. Photo by Zachary Barton via the Nepali Times, used with permission.

Let’s start with the soil. We put a man on the moon 62 years ago, but we still know nothing about the world below our feet, the soil in which all life comes from. Through over-ploughing, mono-cropping, and the use of chemical fertilisers, we have effectively killed all the life in the soil, from beneficial microbes to worms and all other life that presides there.

Trees integrated into a rice-growing system in Jhapa. Photo by Zachary Barton via the Nepali Times, used with permission.

In killing the soil, we released massive amounts of carbon into the atmosphere and compromised its ability to capture the carbon back. And in this dead soil, we grow plants that are chronically sick and are not able to ward off pests and disease. Plants are completely dependent on chemicals for their survival. We then eat these sick plants which give us little nutrition, and we become sick ourselves. 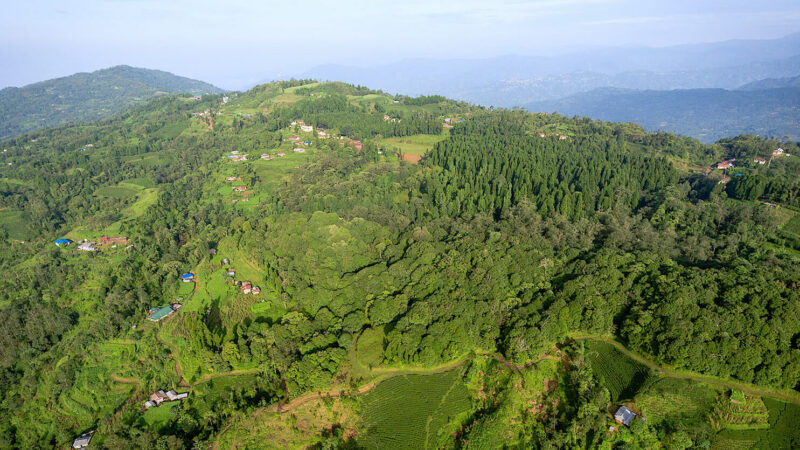 Aerial shot of the Almost Heaven Farm. Photo by Zachary Barton via the Nepali Times, used with permission.

So, while others look to the sky for solutions, let us take a glance down at the most important ecosystem of all, the soil below our feet. If farmers in Nepal can step up and lead the change, the politicians will come stumbling after.

Zachary Barton is a permaculture designer, activist and teacher who has been living in Nepal since 2003. He established Almost Heaven Farm in 2013, where he researches, demonstrates and trains local farmers and international visitors in permaculture design, earth-based building and ecological restoration.