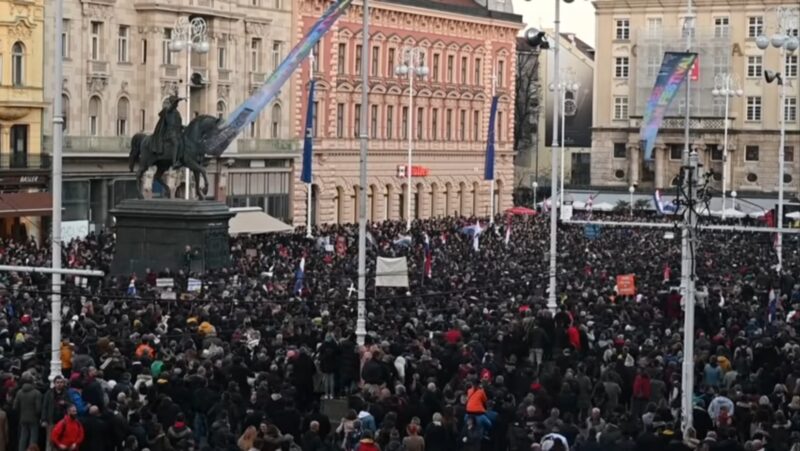 Following a record-high number of daily COVID-19 infections recorded in early November, the Croatian National Civil Protection Directorate has decided to apply EU digital COVID certificates [3] in the public sector, in an effort to minimize the renewed spread of the disease.

Launched by the European Union, the digital certificate is accepted in all member states, as well as in some non-EU countries, with the purpose of demonstrating that a person is vaccinated, has recovered from COVID-19, or has tested negative. It was designed with the aim of facilitating free and safe movement throughout the EU.

On November 5, the Croatian government decided [4] that, starting November 15, all public sector employees and citizens who wish to enter public service institutions need to show such a certificate.

Since then, some employers have refused to implement the policy, claiming that it could lead to divisions among workers, while the capital city of Zagreb faced multiple anti-vaccination protests.

Croatia:
Chants of “We are not giving you our children” as anti Coronavirus passport and mandate protests hit Zagreb.
Credit: Telegram pic.twitter.com/ykuhM6hf3O [5]

At the first big anti-certificate protest that took place on November 20, several thousand people from all over Croatia gathered in Zagreb’s central square and called for an end of the measure, saying it violates their constitutional fundamental freedom of choice regarding the vaccination. The vast majority of participants didn't wear masks and didn't maintain any distance between them, increasing the potential for spreading the disease.

According to Radio Free Europe [9], the protest was not registered, and a couple of journalists were verbally and physically attacked.

Safety of Journalists Platform reported [10] that RTL TV journalist Goran Latković was attacked while covering the COVID-19 protest. “He was attacked from behind by two unknown individuals, who slapped him twice in the face, while a third hit him in the ribs with his elbow. Latković was knocked to the ground, but was not injured.” Latković later said protesters continued to insult him and his crew and the crowd at some point chanted “RTL is leaving.”

Afterwards, a large number of social media users targeted Latković with death threats and insulting accusations that he fabricated the story about the incident. After he reported this, police offered him physical protection. “They accuse me of lying, but I won't hide, I am not scared!” he stated [11] for daily newspaper Jutarnji list.

Police offers protection to Goran Latković: “They accuse me of lying, but I won't hide, I am not scared!”

Both sides of the dispute have been quoting the Article 16 of the Croatian Constitution [15], which prescribes the following:

“Freedoms and rights may only be curtailed by law in order to protect the freedoms and rights of others, the legal order, and public morals and health. Any restriction of freedoms or rights shall be proportionate to the nature of the need to do so in each individual case.”

The protesters, calling themselves the Bijeli tihi marš (Silent White March) on social networks, continued protesting [16] on December 4 as well, with around 200–300 participants shouting and calling for the overthrow of the government. Furthermore, they announced another protest later in December.

Opponents of the measures against COVID-19 who gathered today announced that they will topple the government on December 18!

Addressing the public on November 23, Prime Minister Andrej Plenković stated [20] that mandatory vaccination will not be implemented. In addition, the prime minister announced legislation that would result in fines for heads of public institutions and municipalities that fail to apply the measures that require employees to present their COVID-19 certificates when coming to work, as well as the measures adopted by the National Civil Protection Directorate.

However, Most (The Bridge [21]), one of the opposition conservative parties, is also swiftly turning its back on Plenković’s center-right government by initiating a petition [22] calling for a referendum on the matter of the abolition of COVID-19 certificates.

When asked about the alternative, Most’s representative Marija Selak Raspudić suggested following the usual epidemiological measures and testing vulnerable groups in all institutions. She said that part of the money used to buy vaccines that are not used in the country and need to be donated abroad should be redirected to purchase tests.

So far, the Ministry of Justice and Administration has announced that they need to collect 368,446 signatures to initiate the referendum, which is 10 percent of Croatian citizens with residence in the Republic of Croatia.

In contrast to many big cities, Sali [23], a small island village and municipality located in Zadar County, with a total population of 1,698 inhabitants, is currently the municipality with the highest vaccination rate in Croatia — close to 70 percent of its population has received at least one dose of a COVID-19 vaccine. Considered to be one of the safest destinations in the coastal part of the country, it’s closely followed by another small municipality, Saborsko [24], located within Karlovac County, the continental part of Croatia.

Last summer, Sali was in the red zone on the ECDC map, and the locals claim [25] it was that situation that made them seriously consider vaccinating as they wanted to safeguard public health, but tourism, on which they heavily rely economically, plays a big part in the decision. Ante Mihić, the local librarian and theologian, proudly shared his thoughts on this rare case in Croatia:

“There are loud voices against vaccination, but the people of Sali listened to the science and respected it, so the vast majority of them got vaccinated! Well, that is what happened on my island. And I would add this: for the good of the people, God acts through science, also.

In continental Saborsko, which is located near the Plitvice Lakes National Park [26], a UNESCO world heritage site, the mayor and residents credited the efforts of a local general practice physician and nurse for achieving vaccination rate of 61 percent for the 631 residents.  In a statement [27] for RTL TV, Senija Bilić, MD, in turn modestly responded that it was a joint  achievement, based on providing open and thorough information about all available options regarding the vaccines. 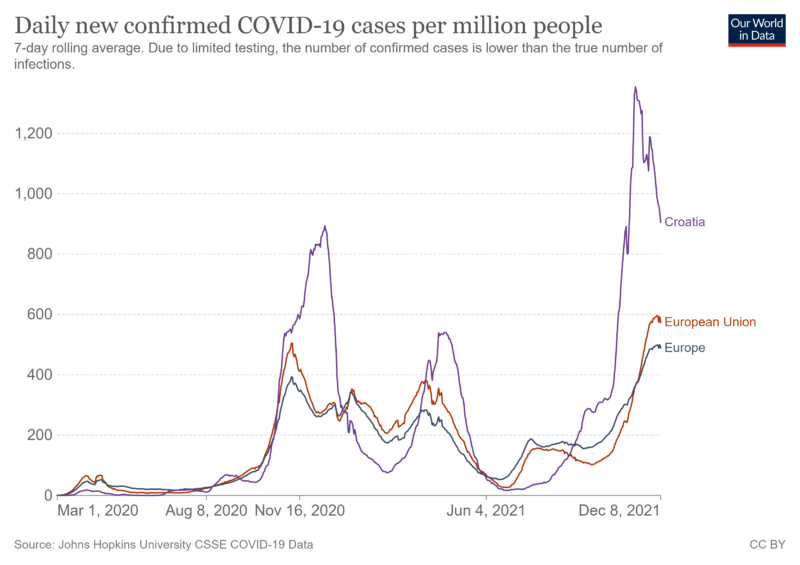 At the EU level, statistics show [31] that around 50–55 percent of Croatians are fully vaccinated, which is below the EU average of some 75 percent.

At the time of writing this article, there are 4,751 [32] new cases of infection daily reported in Croatia.