In photos: Could the mountains of the Caribbean be an opportunity for sustainable tourism? 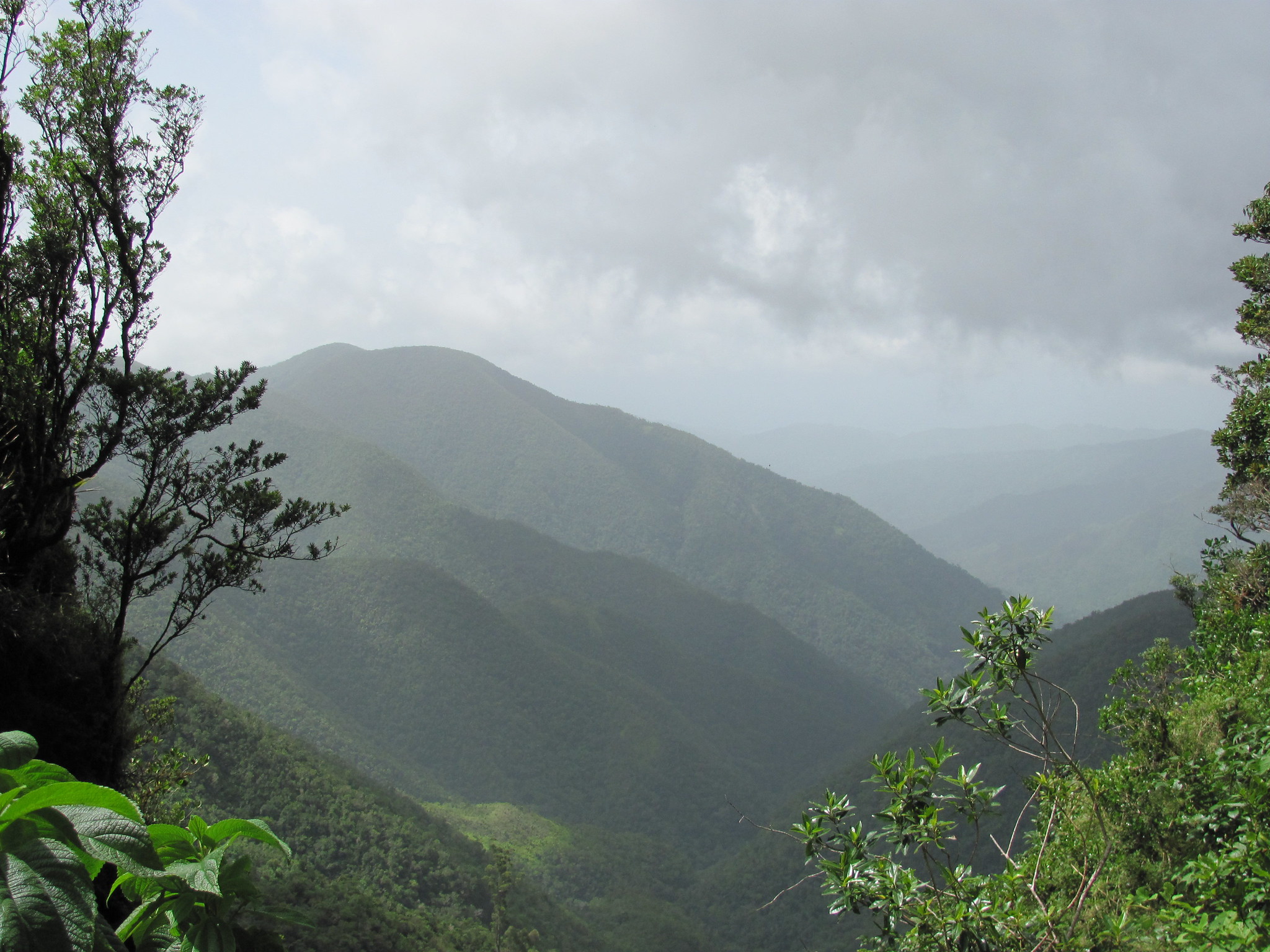 Blue Mountain peaks, Jamaica, one of the best known mountain ranges in the Caribbean. Photo by Devin Crain on Flickr, CC BY-NC 2.0.

If you live in the Caribbean, you might often find yourself climbing uphill—and, of course, down again. While many who visit the region think only of beaches, the inland scenery is often rugged, with many spectacular mountains and hilly ranges to be enjoyed and explored. For added excitement, there are even a few volcanoes!

The theme for International Mountain Day 2021, which falls on December 11, is “Sustainable Mountain Tourism”, with the Food and Agriculture Organization (FAO) of the United Nations noting that mountain tourism accounts for around 15 to 20 per cent of global tourism:

Sustainable tourism in mountains can contribute to creating additional and alternative livelihood options and promoting poverty alleviation, social inclusion, as well as landscape and biodiversity conservation. It is a way to preserve the natural, cultural and spiritual heritage, to promote local crafts and high value products, and celebrate many traditional practices such as local festivals.

#Sustainabletourism can help preserve the cultural heritage of mountain peoples and destinations.

If you're ready for a climb—or even a hike—we'll take a quick tour of the region's mountains, starting with the region’s tallest peak, on one of the largest islands, Hispaniola. 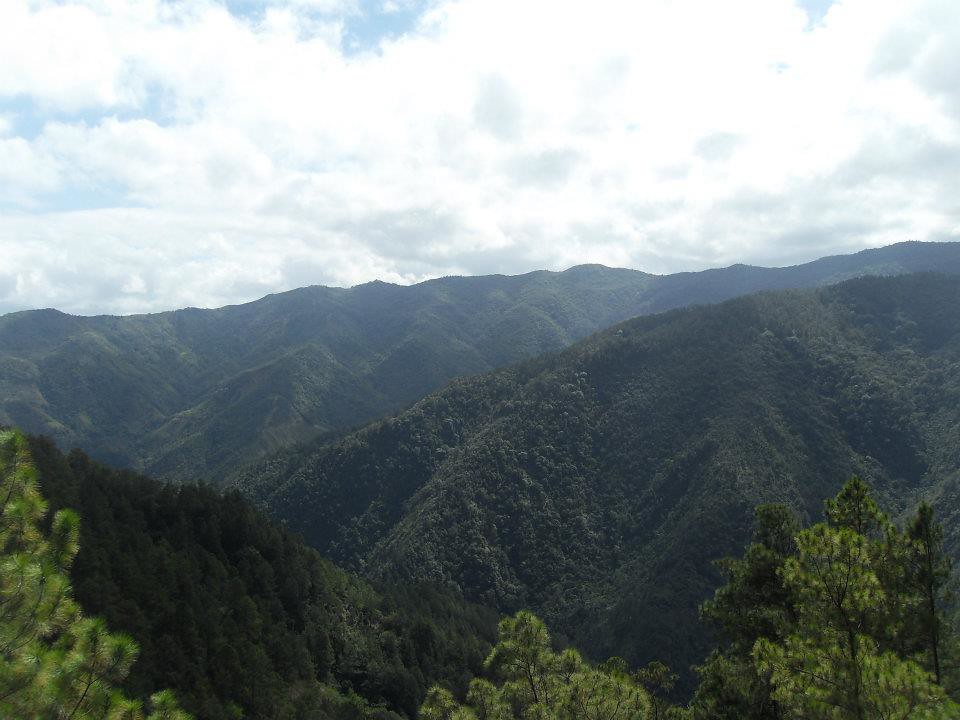 Pico Duarte in the Dominican Republic is 3,098 meters tall (10,164 feet) and named after Juan Pablo Duarte, one of the country’s founders. For some time it was called Pico Trujillo, after the tyrannical dictator, who was assassinated in 1961. It will take you a couple of days to hike to the summit.

In neighbouring Haiti, Pic Makaya is the second tallest mountain in the country, at 2,347 meters (7,700 feet). Situated in the important Makaya National Park, it is a cradle of biodiversity and the last primary forest in Haiti, which has suffered from considerable deforestation. It is also part of the Massif de la Hotte, which was declared a UNESCO Biosphere Reserve in 2016. 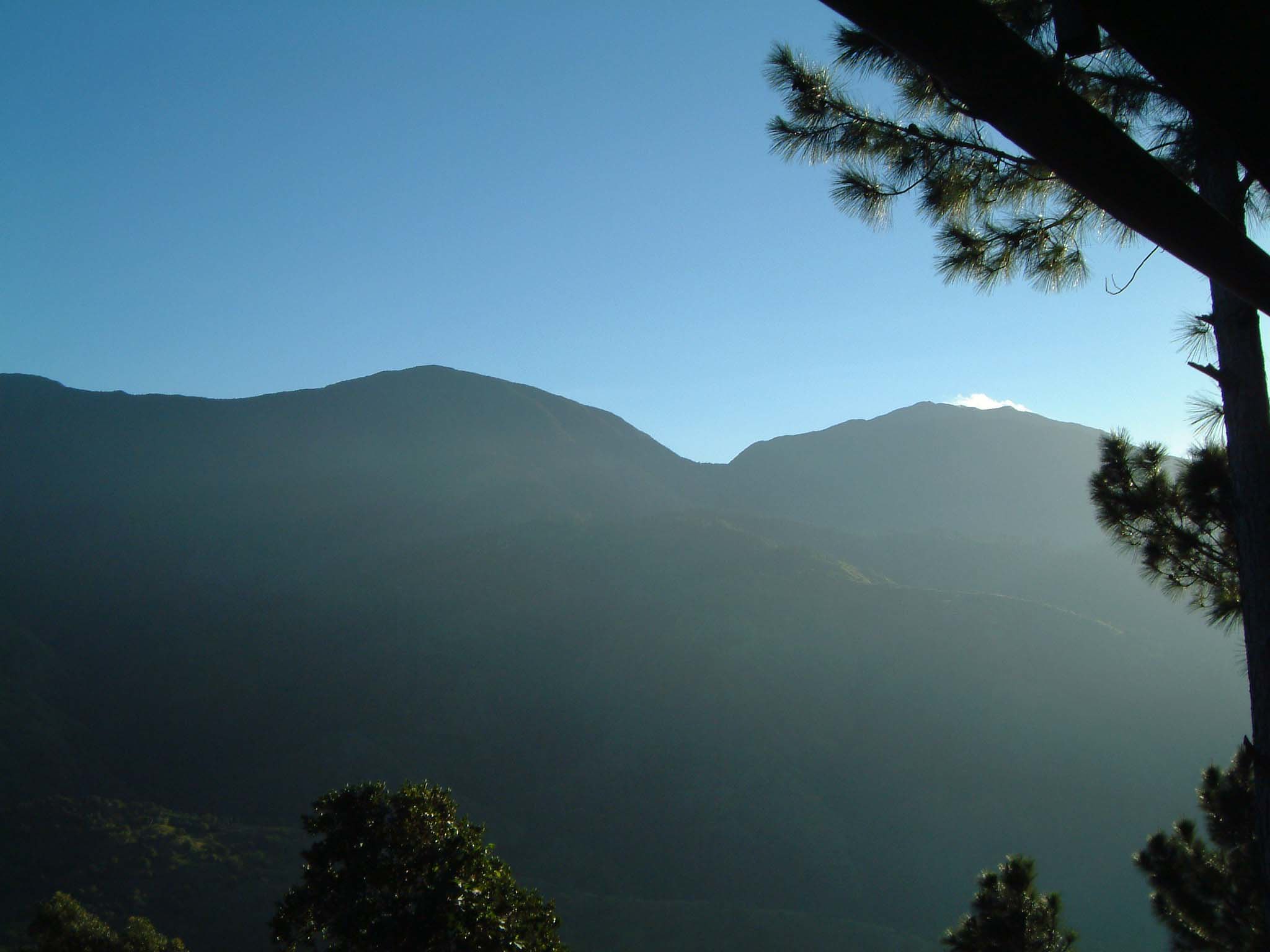 Like Jamaica's Blue Mountains, Pic Makaya and its environs were a refuge for Maroons, and has considerable cultural and historical value.

Now for a quick geography lesson: the mountains of the larger Caribbean islands (the Greater Antilles, comprising Cuba, Jamaica, Hispaniola, and Puerto Rico) are old and “folded” mountains, meaning they're made of sedimentary or metamorphic rock. They are larger, higher, and quieter than their Eastern Caribbean counterparts.

Take Grenada, for instance: its highest point, Mount St. Catherine, which rises to 841 meters (2,759 feet), is volcanic in nature, though it has not erupted recently. It's reportedly a long and difficult hike, but with lovely waterfalls along the way.

Rocks off of Ronde Island—A few miles behind and to the left of these rocks is Kick-‘em-Jenny, an active underwater volcano. Photo by Jason Pratt on Flickr, CC BY 2.0.

The Grenadines have an interesting mountainous feature as well—an underwater volcano known as Kick ‘Em Jenny, located just eight kilometres (just short of five miles) north of Grenada, and rising 1,300 meters (4,265 feet) from the sea floor. Boats, including the ferry from Grenada to the small island of Carriacou, avoid this area, as it tends to be rough. Kick ‘Em Jenny made news headlines in 2015, when it erupted, but it has been declared restive again since 2017. 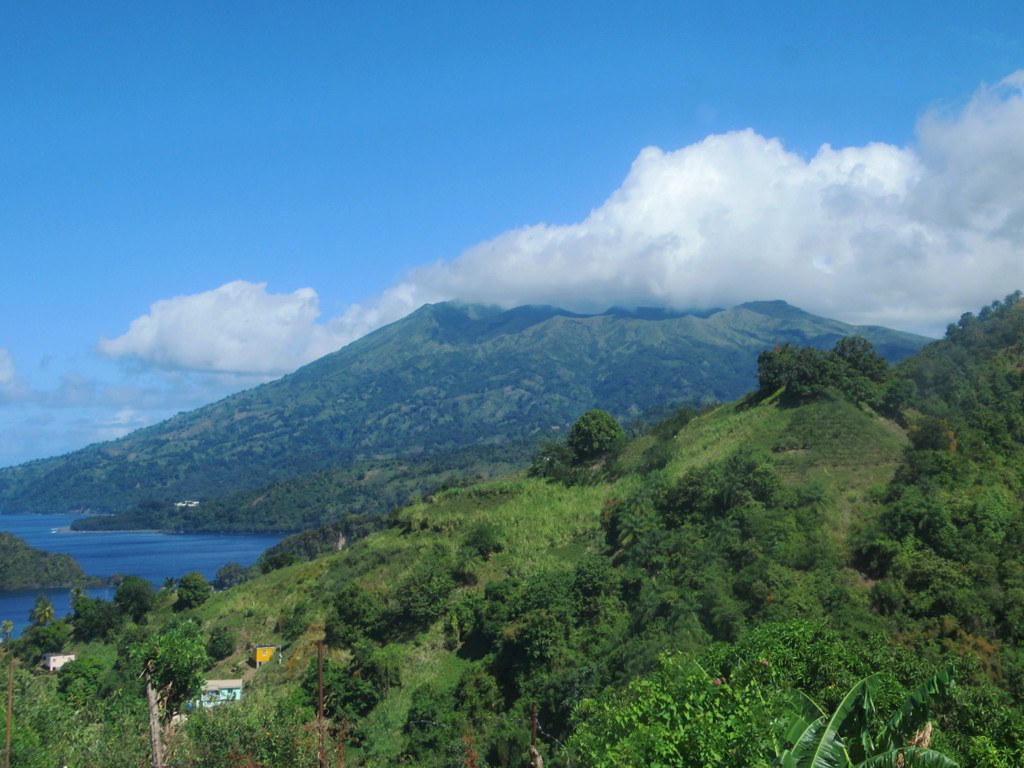 One Caribbean peak that did make its presence felt in 2021 was La Soufrière, an active volcano on the island of St. Vincent. Scientists from the Trinidad-based University of the West Indies Seismic Research Centre recently left the island, as the volcano has calmed down since its violent eruption in April this year. 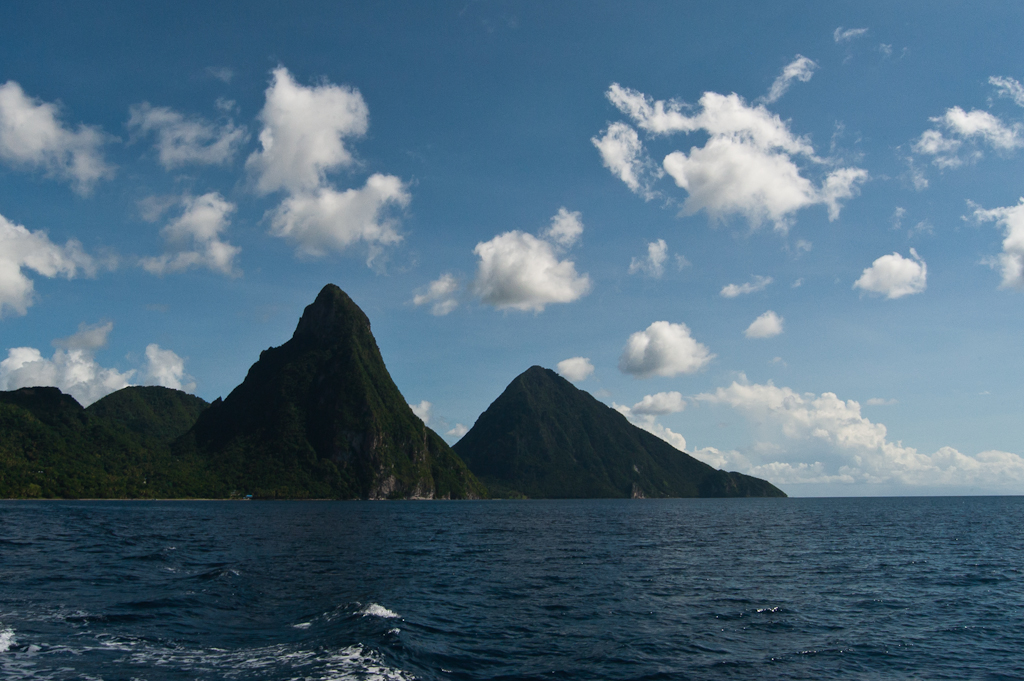 Saint Lucia also has a Soufrière volcanic area with sulphur springs, along with its iconic Pitons, which rise dramatically from the island's coastline and are practically synonymous with the country, featured on almost every tourism brochure and postcard. A UNESCO World Heritage Site, the Gros Piton (798 meters or 2,618 feet) and Petit Piton (743 meters or just under 2,438 feet) are volcanic plugs or spires.

Years have passed since another volcano, on the tiny island of Montserrat, decided to cause some trouble. The Soufrière Hills volcano—there's that name again—woke up in 1995, and its impact was dramatic, smothering the capital, Plymouth, which remains covered in ash. Chances Peak is 915 meters (3,002 feet) high. It remained active for five years, completely transforming life on the island. 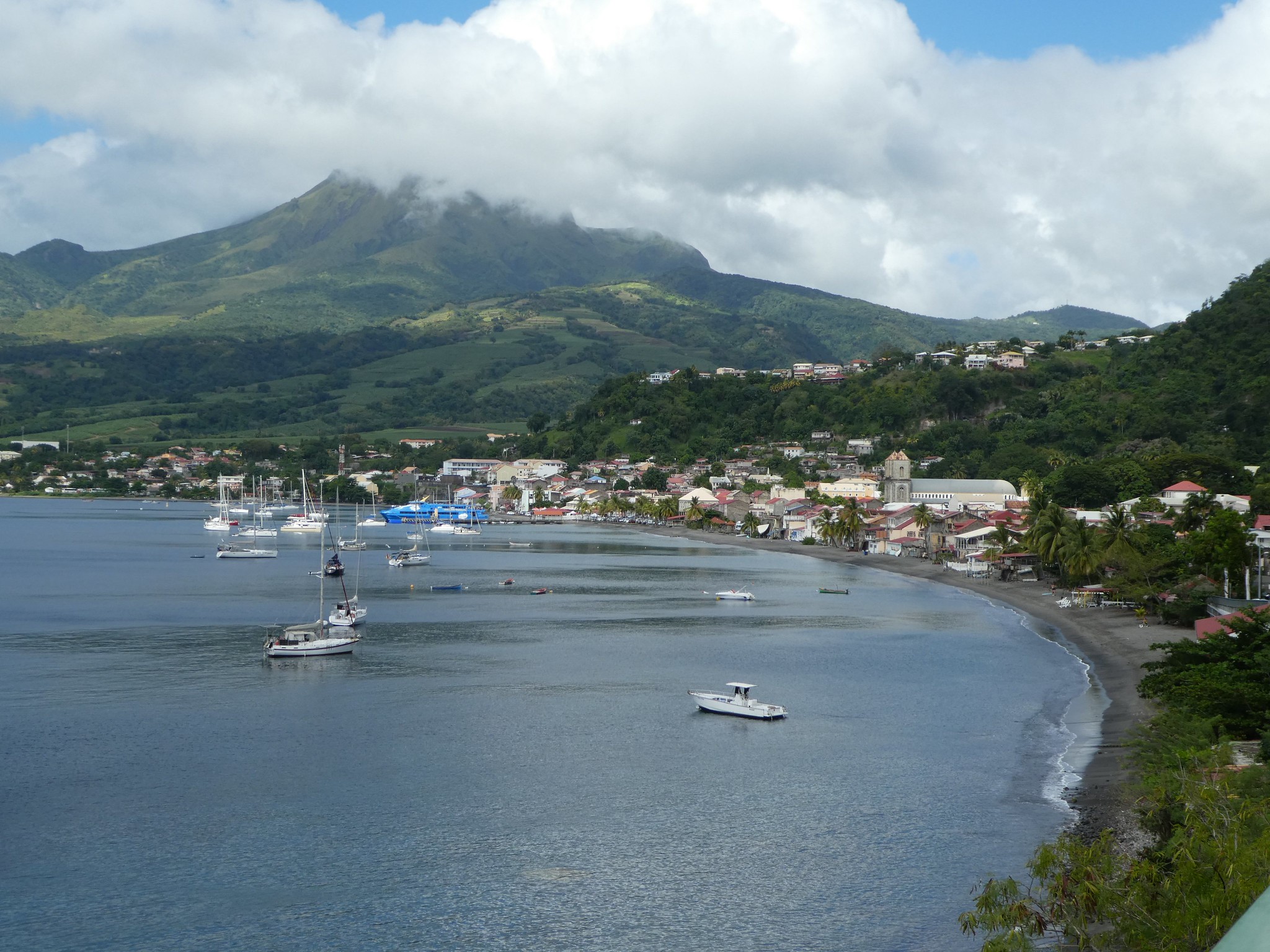 A view of the city of St. Pierre in Martinique, sitting at the base of the active stratovolcano, Mt. Pelée. Photo by Larry Syverson on Flickr, CC BY-SA 2.0.

There are a number of mountains in the Eastern Caribbean that have the potential to erupt. Mount Pelée (1,394 meters or 4,573 feet) in Martinique became the deadliest volcanic eruption of the twentieth century in 1902, completely burying the town of Saint Pierre, and has been a little more restless than usual this year. 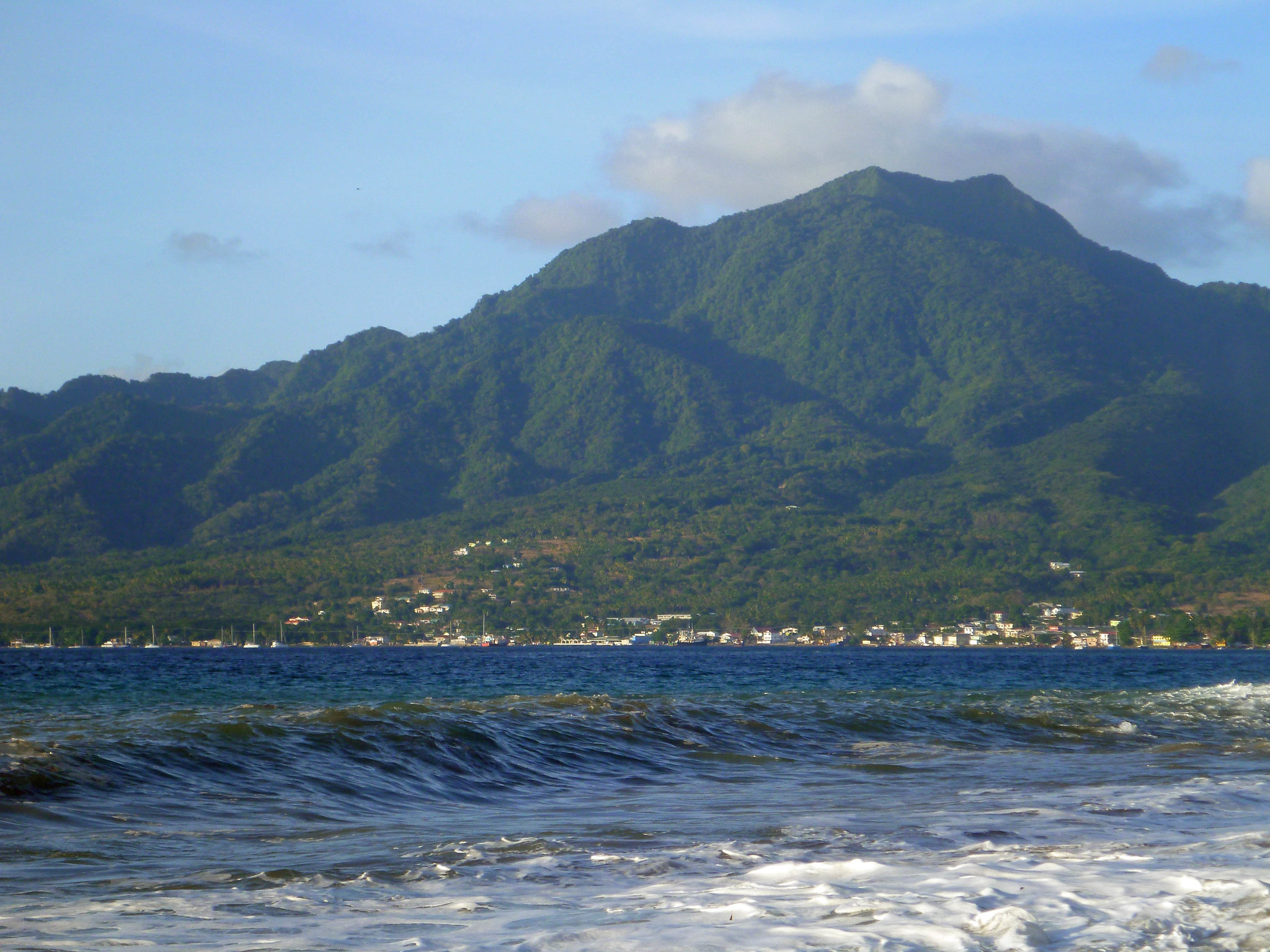 Morne Diablotins (1,430 meters or 4,691 feet) in Dominica—an island known for its nature tourism—and Nevis Peak (985 meters or 3,231 feet) in St. Kitts and Nevis, are both the highest points on those islands; they are also volcanoes that are, for the time being, dormant. 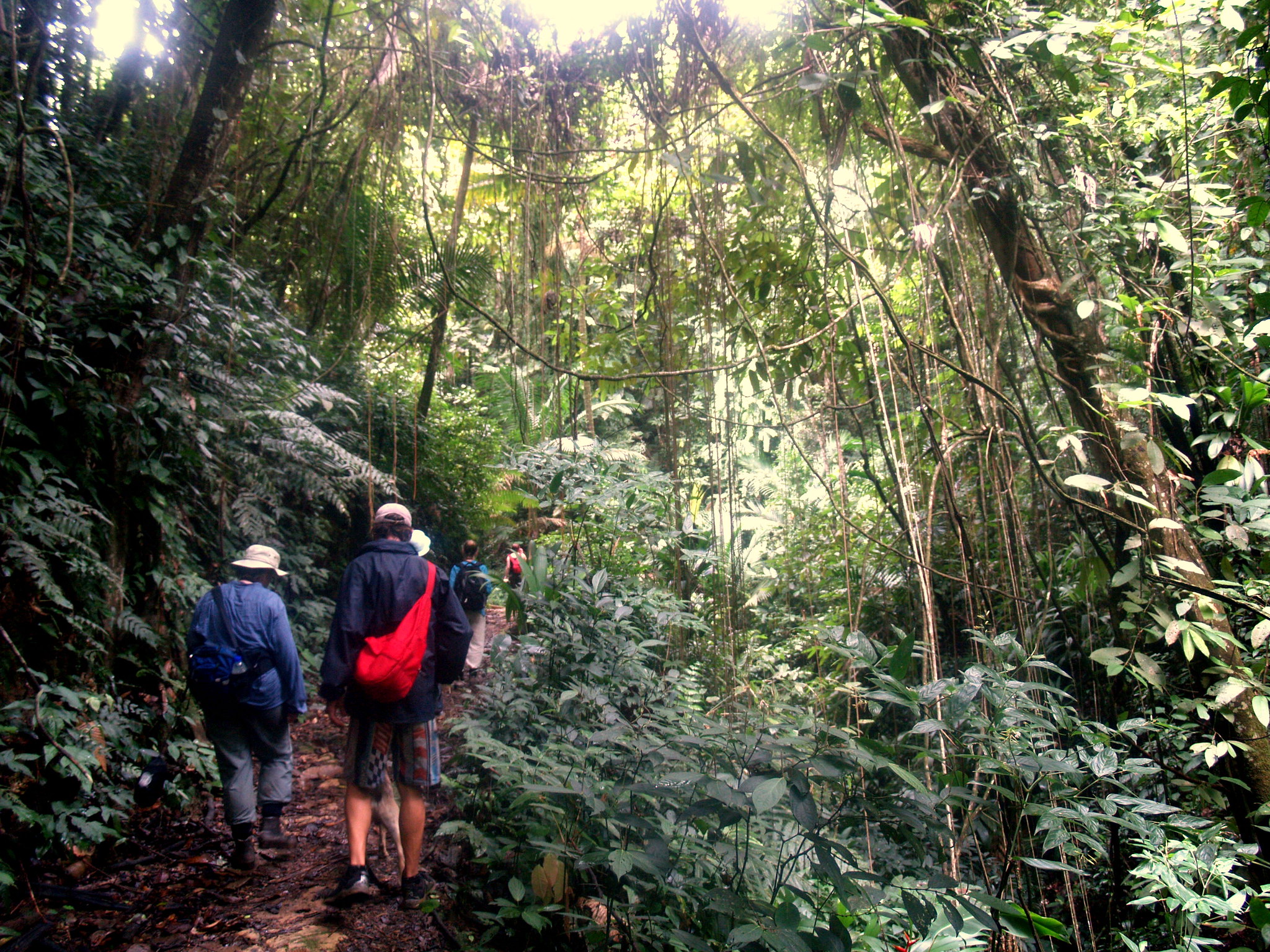 A little further south, the picturesque island of Tobago is another prime area for eco-tourism. The Tobago Main Ridge Forest Reserve, as it is known officially, was first established in 1776 and is a UNESCO Biosphere Reserve. 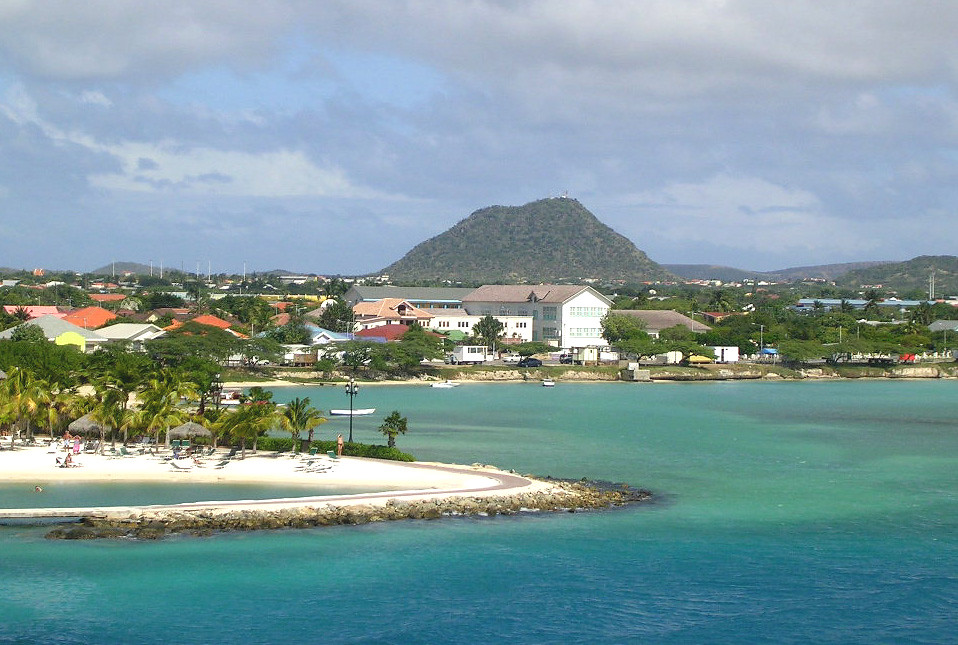 Oranjestad, Aruba, with Hooiberg (Haystack) in the background. Photo by Roger W on Flickr, CC BY-SA 2.0.

The islands of the Dutch Caribbean do not have dramatic mountains and are largely flat. Aruba has its Hooiberg (Haystack), a cone-shaped granite formation that you simply cannot miss on the island, 165 meters (541 feet) high. On Curaçao, it's a short hike up to the highest point, Mt. Christoffel (372 meters or 1,220 feet), situated in a national park. From their peaks, the views are quite delightful. 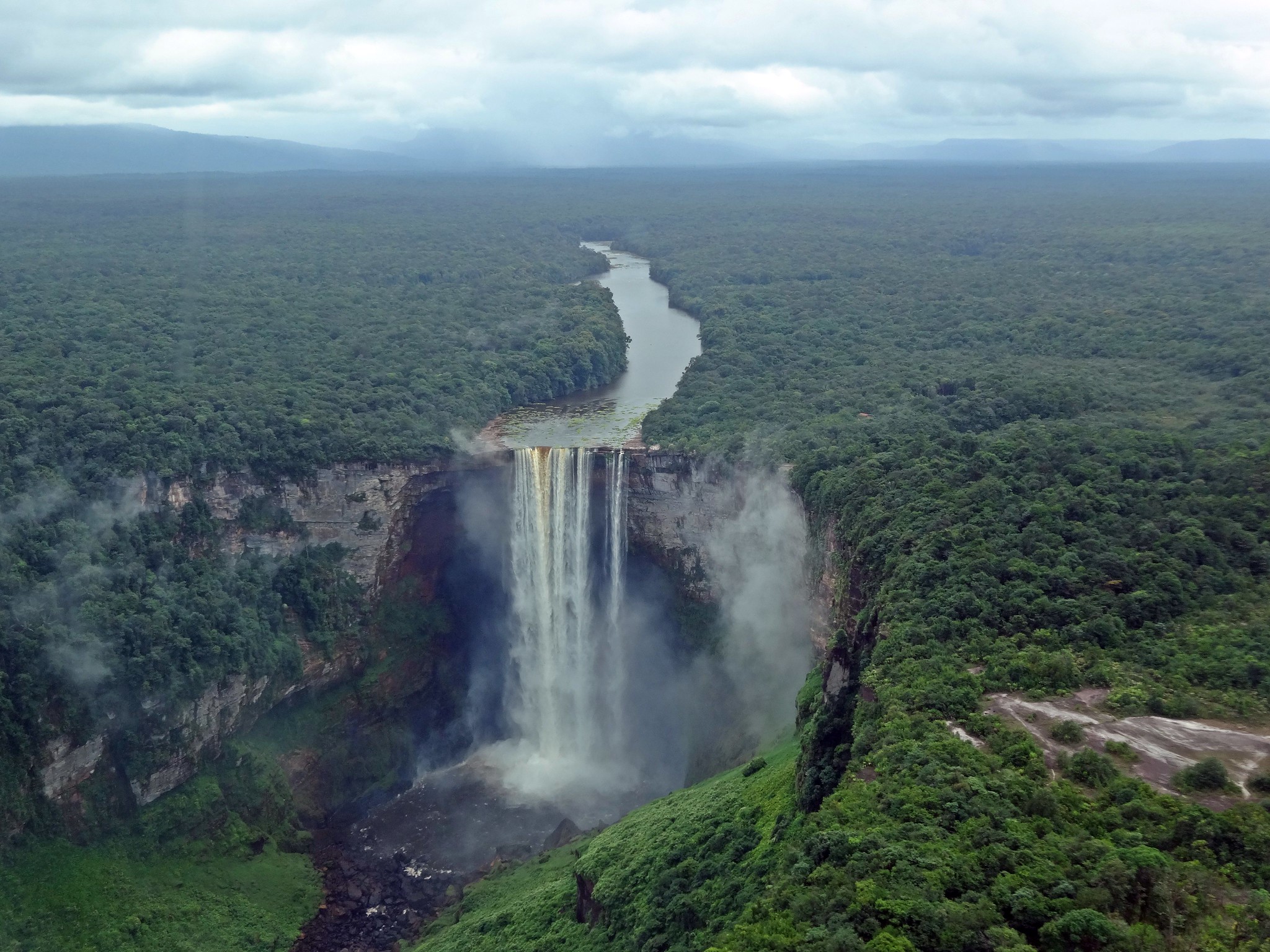 Aerial shot of Kaieteur Falls, Guyana, which forms part of the Pacaraima mountain range. Its highest peak is Mount Roraima, at over 2,800 meters above sea level. Photo by amanderson2 on Flickr, CC BY 2.0.

The contrast could not be greater, however, than the landscape even further south, on the South American mainland. In Guyana, the highest peak is Mount Roraima, an extraordinary, tabletop mountain some 2,800 meters (9,186 feet) high on the border with Brazil and Venezuela. The stunning Kaieteur Falls drop for a total of 251 meters (823 feet) and is one of the most powerful waterfalls in the world, in terms of sheer volume.

On that dizzying note, our virtual tour of Caribbean mountains comes to an end, but the next time you visit the region, remember to look to the horizon—you might be pleasantly surprised. Happy International Mountain Day!