The Uranw of Nepal seek official recognition of their Karma Festival 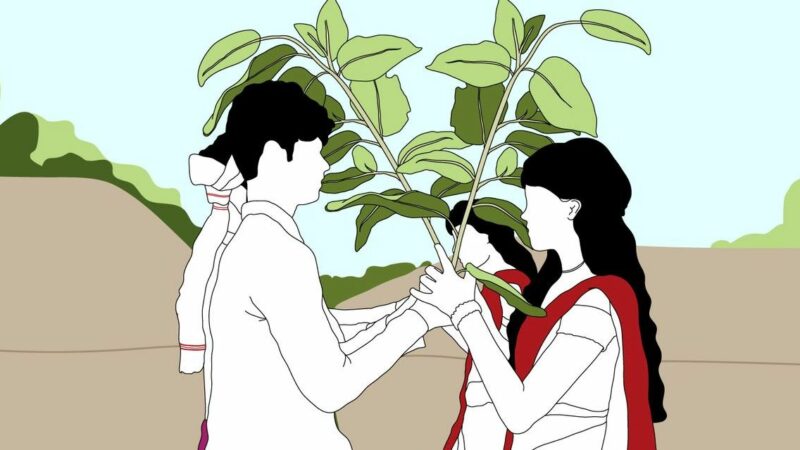 Illustration by Nipun Bajracharya via the Record (Nepal). Used with permission.

This article by Aishwarya Baidar was first published in The Record (Nepal); an edited version is republished below as part of a content-sharing agreement with Global Voices.

The indigenous Uranw (Kurukh or Oraon) community of Nepal have been lobbying for the Karma Puja (a religious festival) to be recognized nationally so that community members can get holidays to attend a festival of social cohesion and community bonding.

On the first day of the Nepali month of Bhadra (mid-August), members of the Uranw community gather at their chief's house to plant jamara (barley sprouts). Young girls go to the nearby forest and bring back some soil to the chief’s home while boys play the dhol (the traditional drum). The soil is mixed with barley seeds and wheat for the jamara.

Uranw woodcutters then get ready to harvest branches from the karma (Neolamarckia cadamba) tree. They light up incense and perform a puja (a religious ceremony) before cutting off the branches. Three girls and three boys from the community, specifically chosen for a fasting ritual, are handed the branches to take home in the evening. The branches of the karma tree and the jamara are both placed in a designated space where everyone from the community can worship, pray, sing, and dance. On the final days of the festival, they take the branches and jamara to each house from the Uranw community, and everyone immerses themselves in the nearby river. 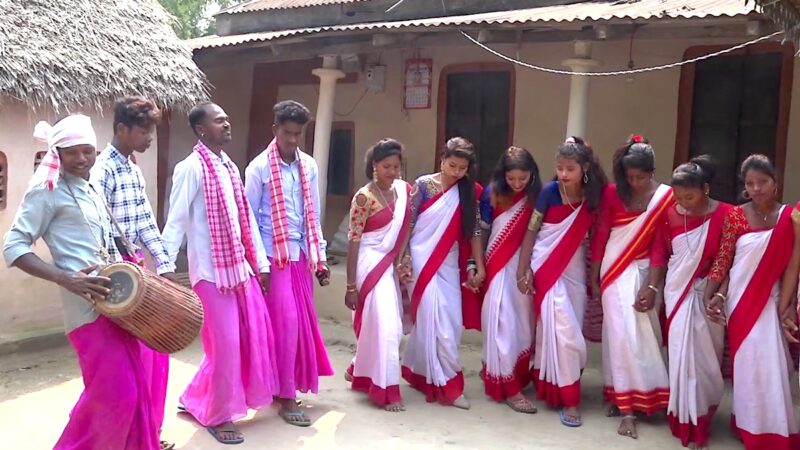 Young Uranw boys and girls singing and dancing during the Karma Puja. Image via the Record (Nepal). Used with Permission.

The festival, known locally as a Karma Puja, is a culturally significant ritual for the indigenous Uranw people. It is celebrated with fasting, nature worship, feasts, and prayers. Elders relay folktales to the young and the whole community rejoices in traditional song and dance. But the festival is often marred by the fact they don’t get a formal holiday for the festival.

“If the state doesn’t recognize the existence and significance of our culture then how will anyone respect and value our identity?” said 56-year-old Parvati Devi Uranw of Paschim Kusaha in Sunsari district.

Although celebrating the Karma festival is essential for the Uranw community, many cannot attend the festival because they don’t have the day off.

“It is vital that every Uranw is present during the Karma puja but work prevents many from participating,” said Parvati Devi, whose eldest son, who works in the police force, was unable to attend the most recent Karma Puja.

To Parvati and Saroj, without a national or even regional holiday to commemorate their biggest festival, their culture will continue to face marginalization. 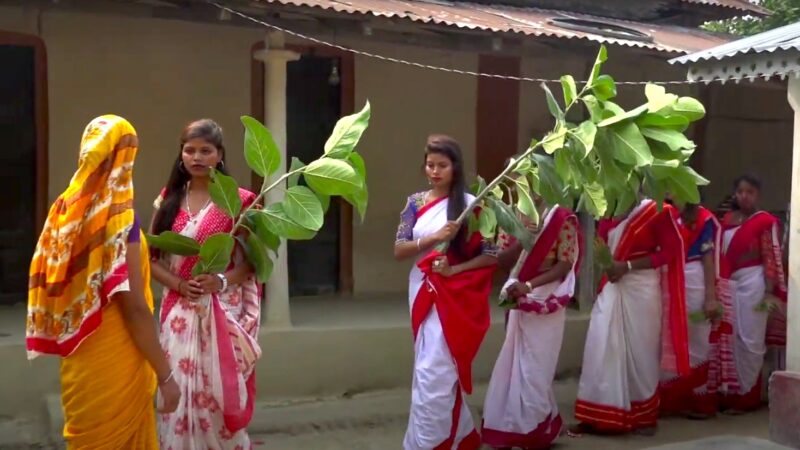 Uranw community members with branches of the holy karma tree. Image via the Record (Nepal). Used with permission.

The origin of the Uranw community dates around 2,500 years ago to the Indus Valley, according to Bechan Uranw, president of the Nepal Uranw Adivasi Janajati Pratisthan.

“There is no recorded history regarding the arrival of Uranw but drawing on oral histories from my parents and grandparents, Sirasita Nal, located in the Indian state of Jharkhand, is the place of our origin,” said Bechan. “Our ancestors migrated from India to Nepal but those who remain in India speak Tamil and Malayalam.”

The Uranw community is also called Urao, Uraon, Oraon, Kurukh, Jhagad or Dhagad, depending on where they are. The community primarily lives in Ilam, Jhapa, Dhanusha, Bara, Parsa, Kanchanpur, Kailali, Saptari, and the Kathmandu Valley. According to the Central Bureau of Statistics Nepal (CBS), the Uranw community is distributed across 43 districts in Nepal, with a population of 41,764. Many members of the Uranw community are uneducated, poor, and marginalized, which has only facilitated the loss of their cultural heritage, says Bechan. 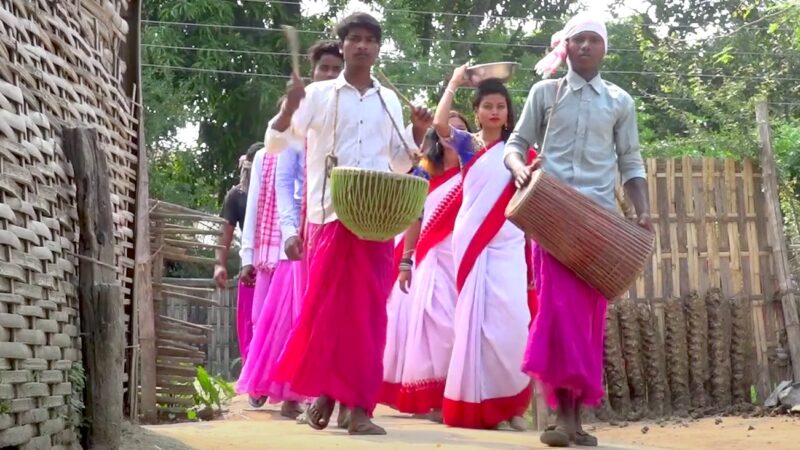 Young girls return from collecting soil from the forest, accompanied by boys playing the dhol. Image via the Record (Nepal). Used with permission.

The myths surrounding the Karma puja, which is called Karam in India and some parts of Nepal, vary from one Uranw to another. Saroj and his family attribute the importance of the karma tree to a legend where the tree hid their ancestors from enemies.

“When our ancestors were being pursued by their enemies, the Karma tree opened up a path between its overgrowth to hide them. Once the enemies had gone away, the tree opened up once again to let them out,” said Saroj.

A documentary produced by the Nepal Federation for Development of Indigenous Nationalities (NFDIN) highlights a different myth about the importance of the Karma Puja. According to the documentary, Uranw women who longed to meet their husbands who were traveling far and wide to earn a living prayed to God underneath the karma tree to be reunited with them. When they were pleading with God, a branch came floating down from the river and they received a premonition to take the branch home and worship it to reunite with their husbands. Peace and prosperity then came to the Uranw community.

The documentary presents Karma Puja as a festival of social cohesion and unity for the Uranw community. However, without a holiday on their significant festive day, many families are separated from each other during a critical time of community bonding.

“Our tribe has been tricked”

For many decades, the Uranw lived freely in the forests of the eastern Tarai, fishing, farming, and worshipping nature. But today, they have become more aware of how the lack of education has led their communities to marginalization, says Parvati Devi.

“Our tribe has been tricked for many years by clever people who sweet-talked our ancestors and got them drunk to take their lands,” she said.

It is this realization that has led community leaders like Bechan to lobby the federal and regional governments for a community-specific holiday.

“We require at least two days of holiday in order to finish the fasting and celebration,” said Saroj, who was one of the youths from his community who took part in the important ritual of carrying branches of the karma tree this year.

Although many diverse festivals from a range of ethnicities have been recognized by the state since 2008, it is largely castes and ethnicities with institutionalized power in the federal government who have been able to claim national recognition, according to Jagat Man Gurung, section officer at NFDIN.

“Communities with more political strength and geographic advantages, such as the Gurungs, Magars, Chhetris, Newars, and others in Kathmandu Valley, have more power in legislative bodies,” said Gurung.

But for the Uranw, the festival is a critical part of their community’s cultural identity and must be preserved.

“Many have already lost interest in the festival due to the inability to participate,” said Parvati. “It will be a matter of pride for our community if our festival gets national recognition.”