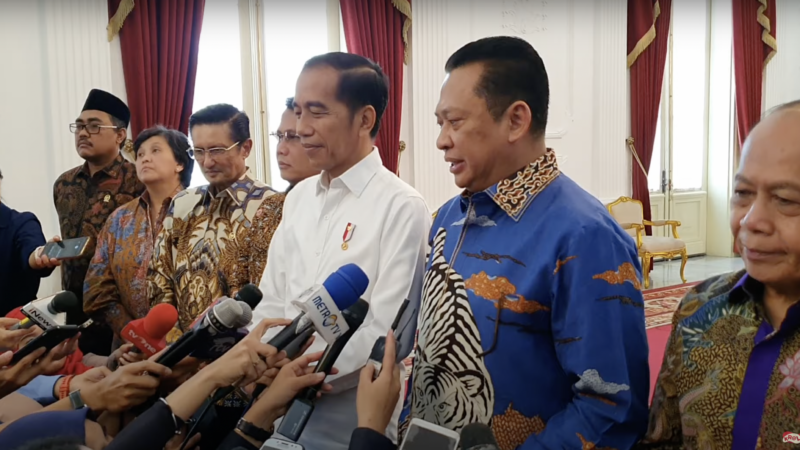 Cyber troops are teams dedicated to swaying and manipulating public opinion through coordinated internet and social media campaigns organized by governments, powerful parties, or corporations. Inside Indonesia, a quarterly magazine based out of Melbourne, released an issue in November discussing the rise of cyber troops in Indonesia and how they have influenced issues ranging from elections to the controversial Omnibus Law on Job Creation and the nation’s COVID-19 policy.

One of the issue’s authors, Wijayanto, is an Indonesian activist and professor specializing in identifying digital news manipulation and exploring how media influences democracies. Global Voices interviewed him about the power of cyber troops in  Indonesia, his recent research, and how the country’s journalistic traditions fit into a digitized era.

Sydney Allen: How can powerful figures use cyber troops to change the media narrative and influence the public?

Wijayanto: There are some policies that the public are very critical to. And what the government does is not just ignoring it, but also, flooding the internet — Twitter for instance — with content supporting the power-holders policy.

This is what we call cyber troops.

So imagine that you talk like this, right? And you can hear me and I can hear you. With cyber troops, the government can talk with a megaphone. The number of tweets is massive.

What we find next is that the critical voices are ignored. And what becomes a trending topic is the voice of the cyber troops. And they're not just flooding the internet with support for the government's policy, but also more than that.They also attack those who are critical with doxing, trolling, cyberbullying.

According to Wijayanto, one of the key instances of cyber troop manipulation involved revisions to Indonesia’s key anti-corruption body, the Indonesian national commission on corruption eradication (KPK), in 2019. Before the revisions, the KPK was widely regarded as one of the most trustworthy organizations in Indonesia, and it had a long history of taking down high-profile corruption cases.

Wijayanto: To give you just one example, one of the problematic policies, that was passed by the government was the revision of the law on the KPK. The KPK is seen as strong and credible, because they are the only institution that [was] still believed as capable of sending corrupt politicians to jail. So it's very important for the politician to weaken the KPK, so it's no longer able to prosecute the corrupt politicians. And one of the ways to do it, is by revising the law so the KPK is still there but the power is reduced.

The government know that they need a support from the public, but the public was also critical [of] this.

So what they do then is manipulate it. Manufacturing consent and support. One of the ways to do it is by spreading hoaxes on Twitter that the KPK is now filled with Islamic radicalists — with the Taliban. So they spread a trending topic on Twitter the hashtag says #KPKTaliban.

Our research found that there are at least 250 articles on mainstream media on the issue of KPK and Taliban.

So maybe people do not always agree that there is Taliban in the KPK, but if you read it every day, you began to consider it as correct, or at least you begin to doubt it.

After the revisions, the KPK was severely weakened. They lost autonomy, no longer had the power to conduct independent investigations, and had to ask an advisory council permission to prosecute important figures. Additionally, some key figures were ousted over bogus qualification questions.

SA: That’s fascinating  — so what can, and should, journalists do to avoid propagating this information?

Wijayanto: I'm also wondering about it too. We have workshops with some journalists as well about it and they indirectly were admitting that yes, they play some part in amplifying the agenda of the cyber troops.

The context of the Indonesian media today — we have a culture of clickbait journalism because of the digital revolution. Clickbait journalism has something to do with profit-making. The more people read your website, then the more advertisements will come there. So, surprising or hyperbolic, superlative news is necessary.

There's also the old tradition in Indonesian journalism, what we call speaking journalism.

So basically people don't investigate the statement of politicians, they just put it as it is. For instance, is a politician says, the KPK consists of Taliban, they don't do a verification of whether or not this is true. So it is recorded as it is. And that's the culture.

And also the political-economic aspect of Indonesian media is that it's a dominated by media conglomerates. Some media outlets are owned by politicians or political parties. Some are close to power holders and the tradition of political journalism or investigation is not very strong here.

So that also plays a role.

SA: Amid all this, it’s hard to imagine online governmental control lessening any time soon. Do you see any way forward so regular people might be able to get past the noise of cyber troops?

Wijayanto: To be quite honest, the short answer is no. One of the conclusions of our research in our last workshop is that we will see this for the rest of time. And it will become even more apparent in the future. But at the same time actually, to fight for a healthy digital public sphere is so very important.

SA: And what do you see as the next frontier that cyber troops may try and influence?

Wijayanto: That's actually what we're doing in the field today. There was an issue in which the civil society organization MUI (Majelis Ulama Indonesia), the assembly of Indonesian Islamic leaders, wanted to create their own cyber troops to curtail an attack to them. One of its members was suspected as a terrorist and people begin to say, “maybe let's ban this MUI.” And one of the officers in Jakarta is saying that we will build our own cyber troops to curtail  criticism and the demands about banning the MUI.

And also some of my friends already got contacted by some politicians who want their name to be viral, to conduct digital campaign for them. For increasing their electability.

So I think it's inevitable to have this kind of digital campaign in the future. For the politicians digital campaigns are okay, because this is a digital era, right? But don't use fake news or hoaxes. Don't do it by attacking people. By trolling or doxxing.

Wijayanto: For citizens, in general, I think people need to learn more — to be more skeptical with what is viral on social media. And I think we need to increase the digital literacy of the people.

The first sign in our research was that there was a sudden emergence of narrative in social media. This is what we call us a tsunami of conversation. For example, there was suddenly a tsunami of opinions on the New Normal Policy.

The second sign was the content creation. When supporting the policy, there are pictures or graphics not made by ordinary people — it's made by professionals. So this is proof that there is an intentional attempt to direct public opinion.

And also we can see it from the hashtag. A hashtag means that you want to create a certain narrative on Twitter: #KPKTaliban or #NewNormal or #OmnibusLaw. That's another sign.

And the fourth was sometimes there was a prize. For instance, “if you tweet this saying the KPK is Taliban or KPK should obey the law, then we will give you credit for your cell phone.”

So those will be maybe some of the things we can see as the sign of public opinion manipulation. People have to be more skeptical and to be more critical in seeing it.