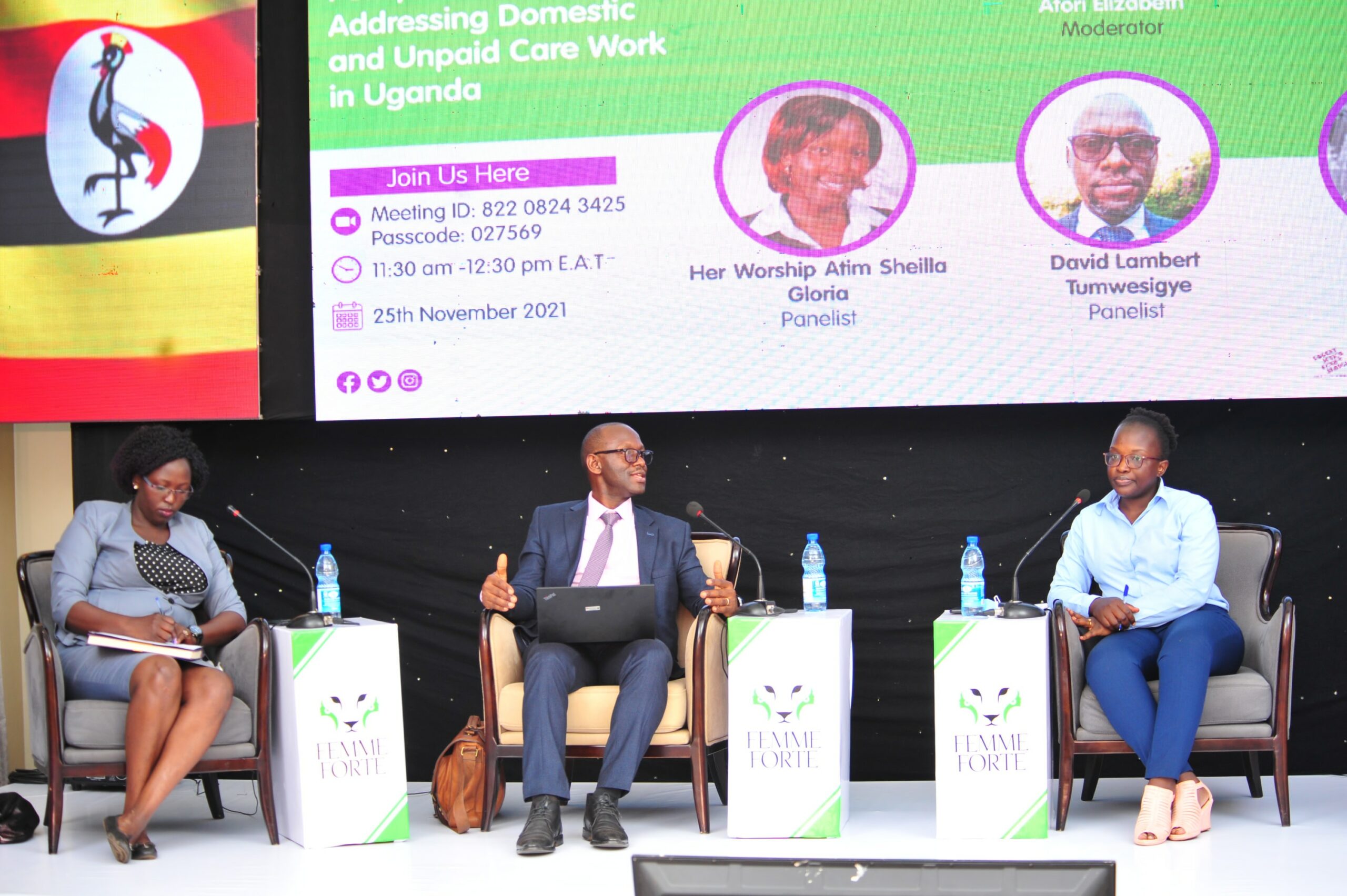 A regional e-conference on unpaid care work was held in Kampala, Uganda, on November 25. The convening of women’s civil society organizations, journalists, academics, women’s rights leaders, and unpaid care work advocates from across the East African region was organized by Femme Forte, GROOTS Kenya, and Masai Women’s Development Organisation, with funding from the Urgent Action Fund. The event gave women affected by COVID-19 a platform to share their experiences on existing inequalities resulting from unpaid care work and to encourage public discourse on the topic.

Girls and women constitute two-thirds of the world’s unpaid care workforce, which perpetuates inequalities in education and the labor market. This burden excludes them from fully accessing education, work, and healthcare and ultimately holds them back economically compared to men. The International Labour Organisation links unpaid care work with increased gender inequalities in the career sector.

The first session at the conference discussed “The Care Crisis and Implications of COVID-19 on Economic Justice and Unpaid Care Work.” One of the panelists, Ms. Allana Kembabazi, the Programs Manager at the Initiative for Social and Economic Rights, defined unpaid care work as “work done within a household that is not paid for but when you look at it, it is supposed to be paid for.”

The impact of COVID-19 on unpaid care work

The loss of jobs and closure of schools in the wake of the COVID-19  pandemic compounded existing inequalities for women in unpaid care work. Esupat Ngulupa Laizer of Masai Women’s Development Organisation — a panelist at the e-conference — said:

Unpaid Care Work has denied women economic participation and resources, increasing their vulnerability during the COVID-19 pandemic. Before COVID-19, women were doing three times more unpaid care work than men. With the pandemic, things have become worse. Women are burdened with unpaid care work and have to drop out of the labour force. Opportunities for women to participate in leadership roles is also limited because of all this work.

A 2018 report by Oxfam on care work in Uganda indicates that an average of 32.1 percent of female home caregivers in Uganda reported suffering from illness, injury, depression, physical and/or mental harm due to their caregiving roles.

A move toward reform

The panelists made a compelling case for recognizing domestic care work and the potential benefits from its remuneration, noting that these require legal reform and mindset changes. UN Women estimates that unpaid care work contributes to about 10-39 percent of any country’s GDP.

During the conference, panelist David Lambert Tumwesigye, Global Advocacy Manager for Child Poverty at Save the Children, highlighted the mental perceptions that will have to be challenged to normalize paid care work.

Regulation and legislation is often demand-driven. Given our cultural context, many people haven’t mentally prepared for a time when men pay for the care provided by women.

Her Worship Atim Sheila Gloria agreed, focusing on the legal and legislative pathway toward a more equitable labor market.

Most times a policy may not be enough. What we need are the laws. When the laws are in place, it becomes easier. Parliament is there to represent people hence they’d know all these problems. The executive and Parliament should recognise and translate unpaid care work into the law through forming policies that can be used as a basis of evaluating the country's capacity to quantify and include carework in the labour market.

The Kenyan High Court’s recent judgment in case MW v AN (Matrimonial Cause Number 20 0f 2016) is a significant win for unpaid care work reform. The court held that the housework and care work performed by a female spouse (in this case, the Plaintiff) entitled her to an equal share of marital property upon the dissolution of marriage.

The court’s recognition of the contribution of women’s unpaid care work to the construction of the matrimonial property is important in starting conversations around remuneration for care work. The judgment could also encourage courts in the East African region and elsewhere to take a progressive stance in relation to matters of care work.