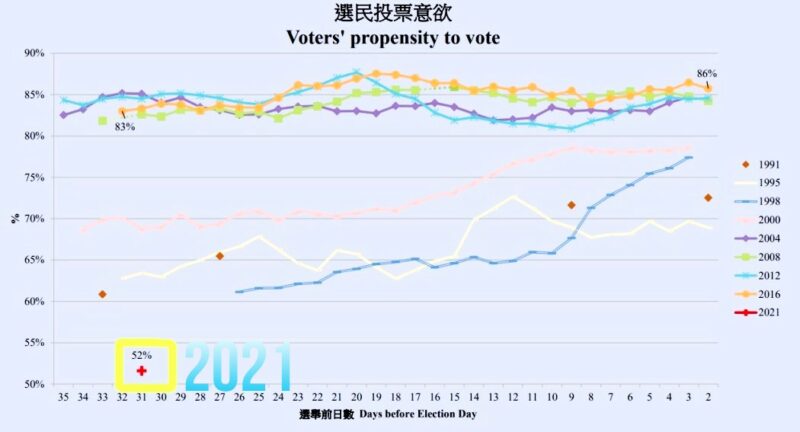 Image from Hong Kong Public Opinion Research Institute with highlight on 2021 figure made by Global Voices.

Because of the “patriot-only” screening mechanism under the new electoral rules, only 153 individuals managed to obtain enough nominations from the Election Committee to become legitimate candidates to compete for the 90 seats in the lawmaking body. And only 35 individual candidates are to compete for the 20 directly elected seats from 10 districts in the geographical constituencies.

In general, people foresee that the voting rate would be very low as the majority of pro-democracy politicians have been jailed and the new election rules ensure that members of the political opposition would not be able to enter the gate in polling places. Catrix, a diaspora HongKonger in Scotland, expresses this popular sentiment on Twitter:

Election is choosing someone you want to serve in the Government. All the people HKer love are either in jail or force outside HK. Now #ccp Hk blame us for not interested in Votings. fxxk u #ccp & hksar. #FreeHongKong first … https://t.co/FL00AmrC8r

Reflecting the political frustration among pro-democracy citizens, exiled activist Ted Hui launched a “Be water campaign” near the end of October on Facebook and urged Hongkongers to cast blank or invalid votes to protest against the new election rules. The ex-lawmaker said (via HKFP):

Faced with the reality that, under the tyranny of the regime, Hong Kong people have very limited options for political mobilisation with substantial influence… The implementation of strategic voting is not aimed at ‘who is elected’ or ‘how many seats.’ Instead, we can use official blank votes to express our resistance to tyranny and our thirst for freedom. This is the greatest political mobilization we can actually achieve at the moment…

The campaign triggered a strong response from Hong Kong authorities and the police quickly took action to arrest three individuals who shared an online message asking people to cast blank votes. They are facing a maximum penalty of three years in jail and a fine of HK$200,000 (25,600 US dollars).

Then, on November 29, Hong Kong’s corruption watchdog, Independent Commission Against Corruption (ICAC) obtained arrest warrants for two exiled activists Ted Hui and Yau Man-chun under the allegation of inciting another person not to vote or cast an invalid vote. London-based political group Hong Kong Democracy Council interpreted the police clampdown as a reflection of their fear for the low voting rate:

The HK govt. is so afraid of the low turnout for their fake election that they issued an arrest warrant to HKDC's Advisor @tedhuichifung, who advocated a protest against the upcoming legislative council election by boycotting or casting blank votes. https://t.co/Lp6pX4n19j

However, the clampdown on the blank vote campaigns cannot improve the voting rate. According to a survey conducted by Public Opinion Research Institute (PORI), Hong Kong voters’ propensity to vote 31 days ahead of the elections has hit a record low since 1991 at 52%, which is 30% lower than the trend in the 2016 Legco elections when a total of 84 candidate lists involving 200 individuals were registered to compete for 35 directly elected seats from 5 districts in the geographical constituencies.

Pro-Beijingers reacted to the survey with indignation. The China state-funded Ta Kung Pao accused PORI of misleading and inciting citizens to boycott the elections as they included the option “casting blank or invalid vote” in their survey. Tom Grundy, founder of HKFP highlighted the professional and independent character of PORI:

.@hkporihkpop came under fire from the Beijing-backed Ta Kung Pao, which claimed their surveys have “incited and misled” citizens.

Name another credible pollster in town?
The pro-Beijing equivalents do not publish their methodology nor have any ownership/funding transparency. https://t.co/sakWAzE9Dy pic.twitter.com/KoQqxcN5Rq

Lo Man-Tuen, the vice-Chair of the All-China Federation of Returned Overseas Chinese, also pointed his finger at PORI and claimed in a newspaper published on November 29 that Beijing had noticed that foreign forces had stepped in to sabotage the Legco elections with boycott campaigns.

Simon Peh, the Commissioner of the anti-graft body also echoed the accusation of pro-Beijingers by asserting that PORI’s election survey could have violated the law.

Parallel to the clampdown, the Hong Kong government decided to set up three border voting stations so that 110,000 voters who are residing in mainland China can cast their ballots. However, election watchdogs and media outlets are not allowed to monitor the voting process in these stations.

Hong Kong democracy advocate Richard Scotford interpreted the arrangement as an effort to boost the number of votes:

HK Gov: This election is gonna be really embarrassing cus no one will vote.
CCP: No worries, we’ll just send people from China to vote. https://t.co/E0Y3ilNXc0

Nathan Ruser, a cyber policy researcher at Australian Strategic Policy Institute, sees the arrangement as a normalization of election rigging:

Indeed, the arrangement is highly controversial as according to existing election rules, only citizens who are “ordinarily residing in Hong Kong” are eligible voters while there is no mechanism to prove if the 110,000 voters from mainland China are still living in Hong Kong.

The latest poll conducted by PORI indicated that half of the local residents opposed the border voting station arrangement. Even former ICAC Chief Investigator Stephen Char expressed worries that the anti-corruption authority would not have the capacity to monitor vote-rigging in mainland China.

But under the current political climate, any result of opinion surveys that are at odds with government policy can be viewed as a threat. AFP journalist Jerome Taylor summed up such a political trend in a tweet:

Not only is it now illegal to encourage people to cast blank votes or not vote in Hong Kong's upcoming ‘patriots only’ election — it might even be illegal to even do polling on voting intentions, the ICAC has warned https://t.co/dSrT1weTKS