Around 63 buildings were burned down during the three-day riot 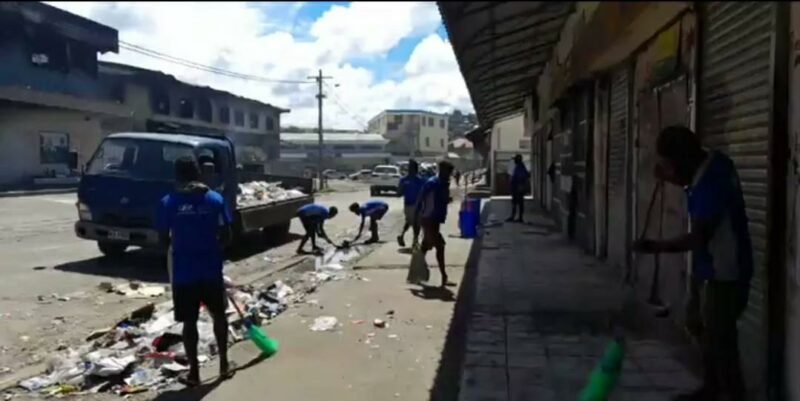 Volunteers help clean up the streets after three days of rioting and looting in Honiara City. Photo supplied by ZFM 99.5 My Favourite Music Station, used with permission.

Hundreds of volunteers have responded to the Soloman Island government’s public appeal to help clean up the capital Honiara after three days of rioting and looting in the city’s Chinatown district.

Protests demanding the resignation of Prime Minister Manasseh Sogavare erupted in the capital of the South Pacific nation on November 24, which later turned violent, leading authorities to institute a 36-hour lockdown.

Based on the initial assessment of the Central Bank of Solomon Islands, 63 buildings were burned down, including schools and police outposts, 1,000 employees lost their jobs, and the total damage to the economy could reach 534 million US dollars. The government lost about 36 million US dollars in potential revenue from tobacco excise taxes alone. Honiara represents 30 percent of the country’s Gross Domestic Product.

As of December 3, the police have arrested 217 individuals suspected of participating in the riots.

Journalist Robert Iroga wrote about the impact of the violence in the city:

Within just three days, life in Honiara — which has been rebuilt steadily over the years since the ethnic tensions and the 2006 riots — has been turned into a nightmare.

Our public transport has been interrupted, shops are closing or burned down and life has been turned upside-down. Such is the new normal for Honiara, but surely more painful days are ahead.

The Honiara City Council deplored the actions of the rioters:

We bring hardships and struggles upon ourselves, our family members, relatives and community members by involving in unlawful activities like riots, arson and looting. We are the ones who will suffer. The hardships we will face are huge and catastrophic.

We also appeal that we realize the harm we bring upon the traditional owners of Honiara. Because of our actions, innocent lives were lost during the burning and looting. The spilled blood desecrated the land traditionally owned by people of Tandai.

After the riots ended, concerned citizens, civic groups, and even foreigners took to the streets to clean up the city.

Cleanup starts for some in Chinatown. Locals manning the shop can not control the mob that looted the hardware & plumbing shop. pic.twitter.com/kkjfItlaFe

The Solomon Islands Chinese Association expressed gratitude to those who extended assistance to displaced community members who had their homes or businesses destroyed:

Many Chinese individuals and families have lost literally everything and are also homeless.

The Chinese community extends their gratitude towards the many peace-loving Solomon Islanders who have offered their support and sympathy during this difficult time.

The Indigenous Solomon Islanders will also be heavily affected such as through loss of employment, and lack of timely supplies for their businesses and canteens.

What triggered the unrest?

Most of those who joined the protests on November 24 were from Malaita Island, a province whose local leadership has consistently opposed the decision of the Sogavare government to cut diplomatic ties with Taiwan in 2019 and adopt a “One China” policy. This was a controversial decision since the Solomon Islands had maintained diplomatic relations with Taiwan for 36 years before Prime Minister Sogavare decided to formally establish relations with Beijing. This controversial decision seemed to further exacerbate tensions within the nation.

Malaita officials refused Chinese aid and continued relations with Taiwan. They said that the province’s criticism over the foreign policy of the Sogavare government led to reprisals that hurt citizens’ livelihoods and the island’s economy.

The Malaita Provincial Executive has issued a statement condemning the violence but also articulated the sentiment of the protesters:

Solomon Islands state is a house built on sand, unless the provinces have more autonomy and the issues of land, natural resource control and indigenous benefit are meaningfully addressed.

From 2019 to 2021, Malaitan attempts to develop its own affairs have been blocked and frustrated by central government, which ultimately resulted in the protests which have spiralled out of control this past week.

Transform Aqorau wrote on the DevPolicy blog that the “sense of alienation, disempowerment and neglect has been building for some time,” not just in Malaita but also in other islands.

Solomon Islands has been drifting to self-destruction. It is one of the most aid dependent countries in the world. Significant donor support is given to its health and education sector. Yet, its ministers and senior government officials treat its people poorly, and allow them to be exploited by loggers and miners.

The ruling and opposition parties have each traded blame over who is responsible for the violence that gripped the capital in November. The prime minister said opposition leaders were seen talking to the rioters and looters before November 24. He urged local leaders not to coddle “domestic terrorists.” Meanwhile, the opposition said the government has “politicized” the police in ordering the arbitrary arrest of innocent citizens and peaceful protestors.

Response from other countries

World leaders, including Fiji’s prime minister, conveyed concern about the situation in the Solomon Islands:

Out of concern for the safety and well-being of our Pacific sisters and brothers in the Solomon Islands, 50 Fijian troops will dispatch to Honiara tomorrow as part of reinforced platoon embedded with Australian Force Elements to help maintain peace and security. ?????

While some media outlets have blamed China for stoking unrest in the Pacific nation, China took a different narrative, accusing the US and Australia of encouraging unrest. The Global Times, a state-owned media outlet in China, published an editorial which accused Australia of “fomenting” the riots in the Solomon Islands:

It is clear that Australia's overall attitude, and that of the US, is to connive with and even encourage the unrest, even though the Australian troops and police were sent to keep order in the Solomon Islands. What is right and what is not is obvious.

The government of the Solomon Islands and their people know what is really going on there. It is also not hard for the outside world to know.