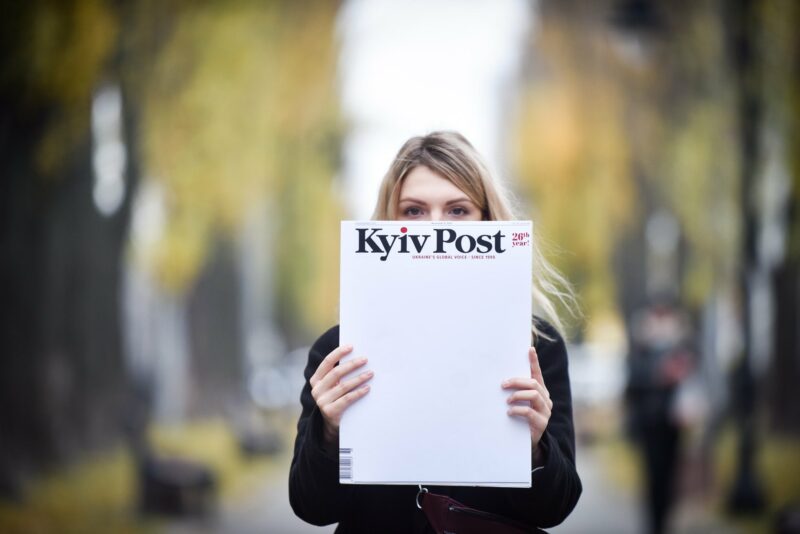 The day Kyiv Post was no longer in print. Image by SaveKyivPost on Twitter [2], used with permission.

On the day, a cryptic update [3] appeared on the newspaper's website, titled “Kyiv Post closes on Nov 8 for a short time.” In the update, owner Adnan Kivan thanked the newsroom team for their service and said he “hope[d] to reopen the newspaper bigger and better.”

Soon after, Kyiv Post journalists reported that the whole newsroom, with editor Brian Bonner at the helm, had been fired and said Kyiv Post “has been killed.” One of the reporters, Illia Ponomarenko, tweeted [4] a statement from the editorial staff.

BREAKING!@KyivPost [5] has been killed.
As simple as that.
Today is officially the last day of Ukraine's only major English-language newspaper. We are all fired.
This is what we all have to say about this situation.
Please, please share to spread the word arond. pic.twitter.com/yFjnuAH6NS [6]

In the statement, reporters accused Kivan of seeking to limit their editorial independence by appointing a “hand-picked” editor to head the proposed Ukrainian-language expansion of the newspaper. They claimed that Kivan's plans to “reorganize” the newsroom amounted to “the owner getting rid of inconvenient, fair and honest journalists.”

Kivan, an Odesa-based construction tycoon who bought Kyiv Post in 2018, had previously promised to protect [8] the newspaper's editorial independence.

Polina Sadovskaya, Eurasia program director for free expression advocacy group PEN America, cautioned [9] that the closure of Kyiv Post served as “a warning signal about the state of independent journalism in Ukraine.”

. @KyivPost [5] is not just another media. It’d served as a window on Ukraine for the entire English-speaking world. KP was a No1 source for news from Ukraine for far too many outside UA. It showed real narratives and was a powerful tool in war on fake news. A void impossible to fill

A new media outlet is born

On November 12, former Kyiv Post journalists and allies launched a new Twitter account and campaign, @savekyivpost [12], to rally against the unjust disbanding of their newsroom, and said they were exploring the idea of a new independent media outlet.

Today is the first time in the Kyiv Post’s 26-year history that a print or digital issue has not been published.

On Nov. 8, the Kyiv Post’s owner, Adnan Kivan, shut down the paper and fired all its staff after a dispute over editorial independence.#SaveKyivPost [13]. pic.twitter.com/D9yHq8ilcm [14]

On November 15, the former newsroom team announced [16] they were launching a new publication, with former deputy editor Olga Rudenko at the helm, and in partnership with Jnomics, a British-Ukrainian media consultancy company founded by two Kyiv Post alumni, Jakub Parusinski and Daryna Shevchenko.

.@savekyivpost [17] staff they are launching a new publication in English about Ukraine. It will be headed by the former deputy editor in chief Olga Rudenko. They also said the paper faced pressure from the General prosecutor's office

Finally, November 22 saw the official launch [19] of the new media outlet, The Kyiv Independent [20], founded by the exiled Kyiv Post reporters and editors. The team also launched a Patreon campaign [21] to solicit crowdfunding support for the new publication.

We were fired by the newspaper owner for defending the editorial independence. But we won’t be silenced. Ukraine needs on-the-ground English-language journalism of the highest quality and our readers need a source they can trust.

That’s why we are launching The Kyiv Independent! pic.twitter.com/RqdVqTOkkV [22]

By November 29, the newly launched Patreon already had over 500 subscribers who signed up to support the independent newsroom and consume its newly launched newsletter [24], Ukraine Daily.

We have reached 500 patrons just a week after starting our Patreon account. Thank you for your support of press freedom in Ukraine.

We now offer you two products: our Ukraine Daily newsletter, and a podcast with our origin story, Media in Progress. ?? pic.twitter.com/LEfsqdzlcy [25]

The Kyiv Independent reporters also released a podcast, Media in Progress [27], documenting their work of building a new media outlet from scratch.

What happened to Kyiv Post. Great inside look at the closure of the oldest English language newspaper in Ukraine from talented Elina Alem. Thank you the team for keeping a good fight for freedom of the press in Ukraine ! https://t.co/eshxbMtezt [28]