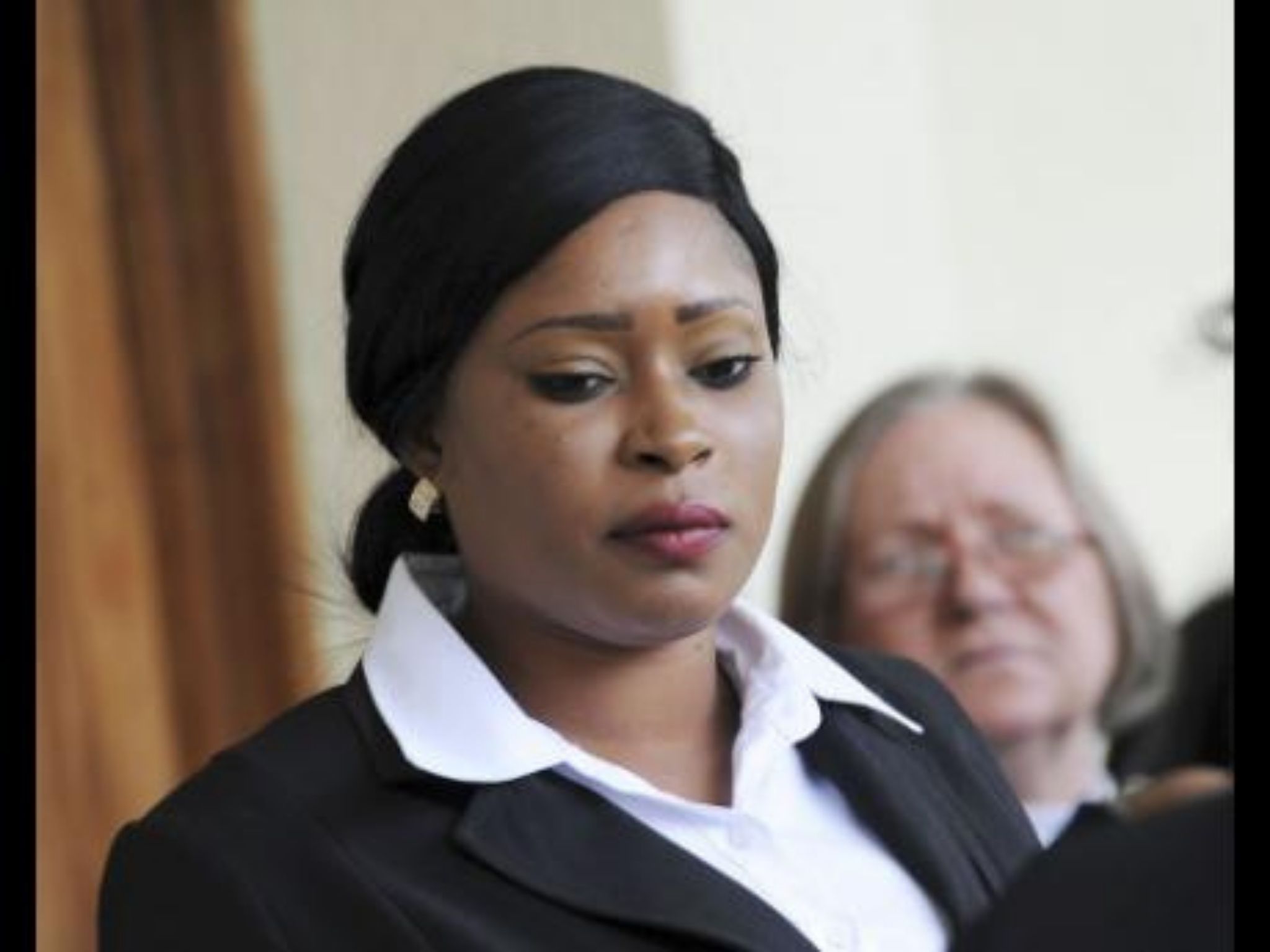 Jamaican Shanique Myrie at the Caribbean Court of Justice, with her attorney Nancy Anderson in the background. Anderson represented Myrie in this high-profile human rights abuse case, which she won. Photo by the Jamaica Gleaner, used with permission.

United States-born human rights activist, educator, and attorney-at-law Nancy Anderson [1] died on November 29 in Kingston, Jamaica, after a short illness. A graduate of Michigan State University, the University of London, and the Norman Manley Law School [2], Anderson first came to Jamaica as a United States Peace Corps [3] volunteer in 1969, spending a year as a teacher with the Ministry of Education. She stayed on, the island became her home and she eventually became a Jamaican citizen. She was admitted to practice as an attorney in Jamaica in 1981. 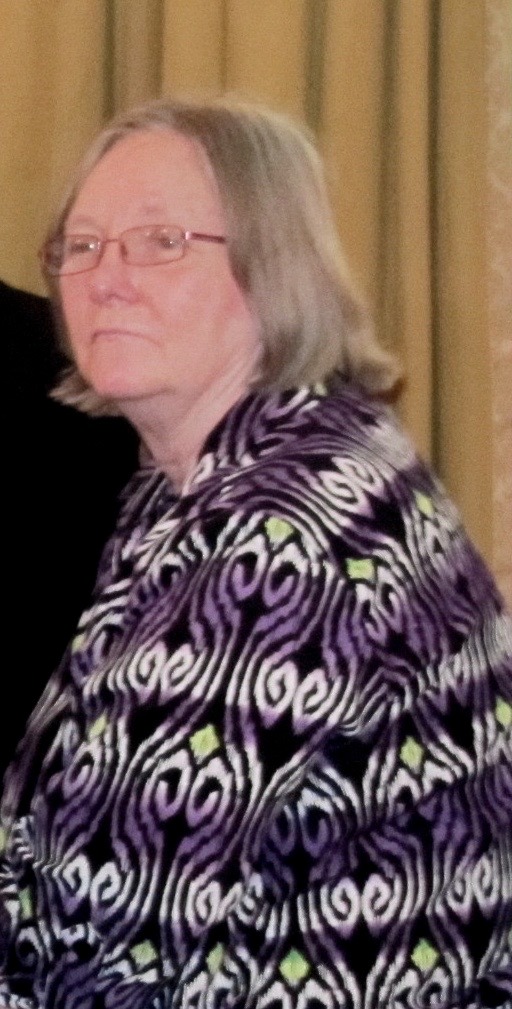 Attorney Nancy Anderson at an embassy workshop a few years ago in Jamaica. Photo by Emma Lewis, used with permission.

Perhaps in keeping with her life and legacy, Anderson passed away on International Women Human Rights Defenders Day [4], part of the 16 Days of Activism [5]. One of Anderson’s key achievements was to help make legal services more widely available to the poor in Jamaica, as director of the Kingston Legal Aid Clinic [6] from 1990 until her passing. After a stint in private practice, she became the executive director of the Legal Aid Council [7] at Jamaica’s Ministry of Justice in 2002.

Making her mark as a compassionate and determined human rights advocate, Anderson served as legal officer at the Independent Jamaica Council for Human Rights [8]—Jamaica's oldest human rights NGO—from 2003 until her death. In 2020, following a wave of public concern after reports of a large number of mentally ill inmates [9] who had not been released from prison, she joined the Chief Justice's committee charged with resolving the issue in partnership with the Ministry of National Security:

(1/2) Yesterday, we officially opened the Medical Centre Infirmary at the Tamarind Farm Adult Correctional Centre. This facility is the first of its kind and is to house approximately 20 bed-ridden and infirmed inmates who are not eligible for release. pic.twitter.com/dsuoww3KkI [10]

(2/2) This new facility follows a commitment made by Deputy Prime Minister and Minister of National Security, Dr. Horace Chang after the death of Noel Chambers at the Tower Street Adult Correction Centre (TSACC) in January. pic.twitter.com/YFLw15PKvt [12]

In 2017, Anderson was physically attacked [14] by a mentally ill inmate but said this would not deter her from her work; the year before, she received Jamaica's Order of Distinction [15].

Anderson participated in a number of major human rights cases in local and regional jurisdictions. She represented Shanique Myrie, who successfully sued the Barbadian government for unlawful detainment, in a high-profile case [16] heard at the Caribbean Court of Justice. In addition to serving as counsel in the Appeal Court of Belize, having been admitted to practice there in 2015, Anderson assisted in compiling law reports for Trinidad and Tobago and the Eastern Caribbean, and had been due to appear in the Jamaican Court of Appeal on the day of her passing.

Lawyer and radio talk show host Jodi-Ann Quarrie shared how, as a young lawyer, Anderson opened her eyes to the plight of prisoners deemed “unfit to plead,” who were left in the prison system—including the highly publicised [17] case of Noel Chambers [18]:

It was Nancy Anderson that allowed me to even know that such horrors existed. She took me to Tower Street to meet with 1 such man. It was a defining moment in my life. I've worked with her for years since then. Rest in eternal peace, Ms. Anderson. ??? https://t.co/AZ64HnUbx2 [19]

I met Nancy in 1979 when I went to Norman Manley Law School. She had been in Jamaica for a few years by then. She was associated with [attorneys] Crafton Miller & Co. as a Legal Clerk all through our law school days, and joined his firm on being called to the bar […] I used to see her in London, as she always took her moot court team to visit me on their way back to Jamaica after their matches […] She was so proud of her work tutoring the team as part of her job at the law school. She was a very proud advocate for human rights […] She applied to become a Jamaican as she loved the country and had no intention to go back to live in the U.S.

Anderson was very involved in other areas, including election monitoring. She served as a director of Citizens’ Action for Free and Fair Elections (CAFFE) from 2000. CAFFE tweeted their tribute to her, observing [21]:

Miss Anderson was never afraid of taking on difficult tasks or reluctant to give her services free of costs to the poor when the need existed and the cause was worthwhile.

Anderson's willingness to serve—and to share her knowledge—knew no bounds. She served on advisory boards and review tribunals related to HIV/AIDS, drug abuse, and witness protection, and was part of the Justice Training Institute, chaired by the Chief Justice, from 2010 to 2016.

One young lawyer expressed his admiration for Anderson's life of service:

Mentoring students became one of Anderson's great passions. She taught advocacy and ethics at Norman Manley Law School from 2009 until her death, and was especially involved in the school's moot court [23] team, which met with great success as the global winner for four successive years. She served as a judge at the Nelson Mandela World Human Rights Moot Court Competition [24] in Geneva in 2017, and at the Jessup Competition [25] of the International Law Students Association in 2018 and July, 2021.

On Twitter, there was an immediate outpouring of emotional tributes from Jamaicans, especially from young lawyers whom she had mentored and inspired. Many simply remembered her as kind and selfless.

The NMLSSA extends our deepest condolences to the Family and Friends of Ms. Nancy Anderson.⁰
Time can never fade the memories we have created with Ms. Anderson. She has touched our lives abundantly. We will never forget her invaluable impact. pic.twitter.com/A5uLlhHjjv [26]

One media practitioner paid tribute to her determination:

Nancy Anderson was the attorney on the 1st case I heard of someone spending decades in Jamaican prison w/o trial and she didn't stop until that woman was released. I admired her selflessness. She'll be missed. https://t.co/VEh0H3GptV [28]

A young Jamaican from a low-income community shared:

You taught me so much. Your kindness and stellar service continues to live on in the minds and lives of so many young attorneys and people from the hardened streets in Jamaica. #RIP [30] #NancyAnderson [31] https://t.co/twd20gOelj [32]

When I took an interest in human rights as a teenager, Nancy took me under her wing, took me to the prisons, gave me research opportunities, and my first real internship. And always kept in touch. I owe so much to Nancy Anderson. This country owes so much to her. ?

Anderson was unassuming, never one to grandstand. One Jamaican summed her up simply:

When me seh PURE heart, Nancy Anderson to a T.

Although Anderson was not born in Jamaica, her love for and dedication to helping the most marginalised of Jamaicans‚ in addition to guiding and encouraging many young lawyers—endeared her to many, by whom she will be deeply missed as a champion of human rights.