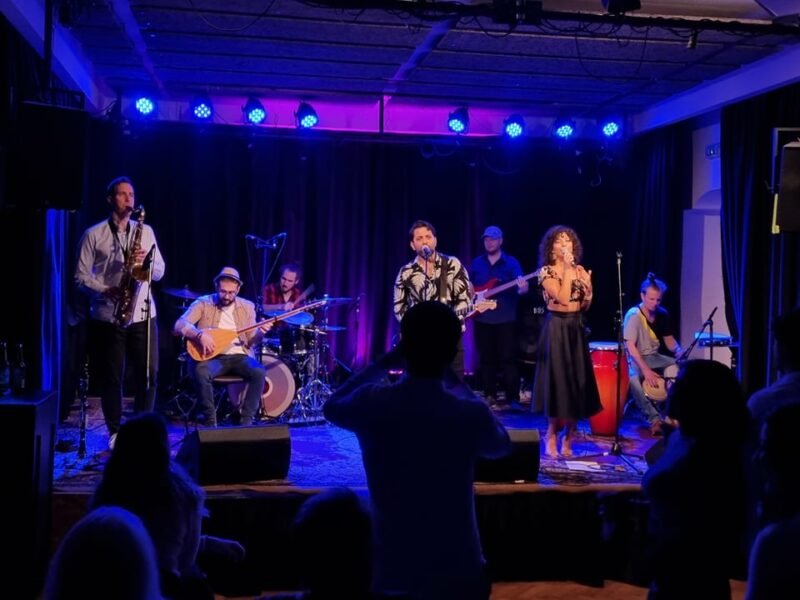 Nasip Kısmet is a term used by Turkish people to describe the idea that “what is meant to happen will happen,” or “destiny.” This is the term a group of Turkish-Hungarian musicians in Budapest chose for their band, one that reflects the link between the two cultures. How fortunate they are to play Turkish folk songs in the jazzy-rock arrangement in Hungary, especially in light of recent developments — the Organization of Turkic states reforms on one side and the right-wing political discourse of the Hungarian prime minister, Victor Orbán, on the other?

Arif Erdem Ocak, the founder, and soloist of Nasip Kısmet, who has lived in Hungary since 2010, and has been playing Turkish music there since 2015, answered my question about whether he faced mistreatment because of his Turkish origin, by saying:

It is a tough question, of course, it is seen and felt, a lot of stereotypes, especially regarding the Kebab shops, although there are not that many Turkish people, as in western Europe… The mistreatment and racist attitude could be felt, but I cannot blame the whole nation, because this kind of attitude is all over the world, and I don’t want to blame the whole nation, just because of a couple of intolerant people.

Arif's words were confirmed by one of the Hungarian listeners at a Nasip Kısmet concert. One, a historian by education, said that there was a disdainful attitude towards the Turks, whom some consider “second-hand, second-level” citizens, or “just kebab-makers,” the result of a kind of symbiosis of the history of the Ottoman period and anti-Islamic propaganda.

Ties between the two countries are centuries-old. There are monuments of the heritage of the Ottoman period, such as the famous Gul Baba Tomb in Budapest, or minarets in different Hungarian cities, such as Eger, Érd, or Yakovalı Hasan Paşa Mosque. Nowadays, countries are cooperating, not only in the economic sphere, but also in the field of culture, and through mutual “soft power” institutions, for example, the Hungarian Culture Institute in Istanbul, which has been operating since 2014, and the Yunus Emre Institute in Budapest (2013). This can also be seen in museums and exhibitions, and names, such as the square called “Yunus Emre,” after the 13th-century Turkish poet and Sufi mystic.

In 2018, the Turkish Ambassador to Budapest, Ahmet Okif Aktay, even said that Turkish-Hungarian relations were “in a golden era,” notwithstanding the populistic rhetoric of the Hungarian prime minister, Victor Orbán, who is widely known for his far-right vision, as well as Christian, anti-immigrant and anti-Muslim populism in the country. However, the anti-Ottoman rhetoric of Orbán is not that simple, since he has also started the so-called “sanitization” of Ottoman heritage in Hungary.

In comparison with many other European Union states, especially Central Eastern Europe, Hungary, and the Balkan countries have deeper historical and cultural ties not only with Turkey (including Ottoman Turkey) but also with Turkic nations.

Although, according to the scientific data, Hungarians have no kinship with the Turkic peoples, the concept of Hungarian Turanism was popular from the 19th century up to the end of World War II, bringing up the idea of somewhat superiority over the other nations.  Some people still believe in the common genetic roots of Hungarian and Turkic people or use them as a reason to tighten relations between the countries.

The specific closeness of Hungarians to the Turkic people or even the Turkic world remains. Since 2010 a popular festival, the Great Kurultáj, is held in Hungary that promotes the common heritage of nomadic people in most of Central Asia.

Hungary has been an observer in the Organization of Turkic States (formerly the “Turkic Council,” founded in 2009) since 2018, as the only non-Turkic and European country, and actively participates in the meetings. In 2019, a representative office was opened in Budapest.

However, Hungary possesses the closest relations out of all Turkic states with Turkey. Starting from the 16th century and the Battle of Mohacs in 1526. Then, the victory of the Ottoman Empire over the Kingdom of Hungary led to the partition of Hungary, the creation of Ottoman Hungary, influencing the history, creating the cultural and architectural legacies, and on the other hand, specific anti-Ottoman rhetoric, which is still relevant after half a millennium.

It is surprising that with such a common history and strong cultural and economic-political ties, there are not so many Turkish people in Hungary. They are not even included in the number of national minorities, among which are representatives of the Balkan and neighboring countries, as well as Roma, and Turks also do not constitute a large part of immigrants, who are from Ukraine (15.41 per cent), Romania (11 per cent), Germany (9.14 per cent) and Slovakia (5.2 per cent).  As of 2019, a little over 3,200 Turks are living in Hungary, almost 1,000 more than in 2016.

What is the attitude of Hungarians towards the Turks? Added to political propaganda, anti-Islamic sentiment has increased because of the refugee crisis in 2015 and subsequent years.

The skeptical attitude of the authorities towards asylum-seekers, especially those from countries with a Muslim majority continues, yet the attitude of Hungarians towards the Turks is not univocal.

Although some Hungarians are following the mainstream channels with that particular discourse, xenophobic views are not widely spread among the nation in general.

However, the people I interviewed agreed that the cultural ties are still strong, for example, the Hungarian chef Agnes Toth introduces Turkish cuisine to the world, praising the rich culinary culture of Turkey.

Or the example of Hungarian academic musician Dániel Mester from Nasim Kısmet, who lived and worked in Amsterdam for eight years, and was also a band member of Dutch-Turkish singer Karsu Dönmez and a Rast trio in the Netherlands.

When I asked if he noticed a racist attitude, he answered:

As a Hungarian, I haven’t seen that. Maybe because Turkish music is not so common in Hungary compared to the Netherlands for instance, it is still counted as exotic music, so music-lovers are super positive about that, they refer to Turkish music as snake-charmer or belly-dance music

Is Turkish music just “exotic” to a Hungarian, or there are more common elements?

I asked this question to Ocak and Mester, and both remember the famous Hungarian composer and ethnomusicologist Béla Bartók, who collected and made analytical studies of Turkish folk music in the 1930s. Mester added:

Common elements have been discovered in musical research carried out by Bartók, but also by János Sipos. But that refers to a small segment of Turkish and Hungarian folk music (If I am correct, vocal folk music, namely laments). Still, it feels like a new genre for me. The ornaments and the intonation are the biggest challenges for me.

Although confirming the similarities in motives of Hungarian and Turkish folk music, Ocak mentions the different approaches of Hungarian people playing Turkish music:

The band consists of musicians with academic musical education, most of them are of Hungarian origin, except me and my sister, who is also singing. I love to play with Hungarian musicians because they bring a new flavor, a new interpretation, or an approach to Turkish music…

Which of their songs is the most popular among Nasip Kismet's wide spectrum of listeners? The musicians disagree, with Ocak saying Barış Manço’s song “Hal-hal,” while Mester sees a sudden reaction when they start playing “Büklüm Büklüm.”

Nasip Kısmet means fate or fortune in English, a phrase saying that you can't control what's happening, and you'll accept whatever comes your way; good or bad. It has a deep meaning and philosophy behind it. Indeed, if it was meant to interconnect Hungarian and Turkish culture, then it has come to life and enriched it.

Oceania  17 hours ago
Cancel this reply