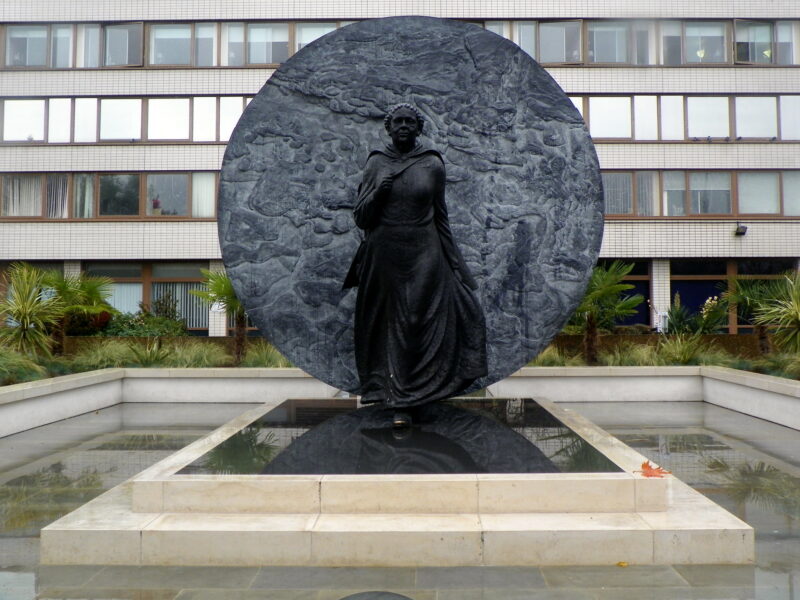 Mary Seacole Memorial by Martin Jennings, 2016, outside St Thomas’ Hospital, London. Seacole (1805–1881) was a Jamaican nurse who helped treat the wounded and save lives in the Crimean War (1853–1856). The memorial is believed to be the first statue in the UK dedicated to a named Black woman. Photo by Peter O'Connor aka anemoneprojectors on Flickr, CC BY-SA 2.0.

The government of Jamaica has proclaimed November 23, 2021, as Mary Seacole Day, in memory of Mary Jane Seacole (1805–1881), an extraordinary Jamaica-born nurse and entrepreneur who travelled extensively and nursed soldiers during the Crimean War while enduring considerable discrimination.

Special Announcement .The Governor-General of Jamaica has proclaimed November 23rd 2021 “Mary Seacole Day”
Congratulations to the Mary Seacole Foundation in Jamaica whose efforts brought about the proclamation. pic.twitter.com/b8WqCVw2Uk

The Mary Seacole Foundation, which was re-launched in Jamaica in 2020, works to increase awareness of Seacole’s achievements.

On the special day—which was marked by representatives from the Nurses Association of Jamaica, national librarian Beverley Lashley, and executive director of the Institute of Jamaica, Vivian Crawford—Foundation members Anna Perkins, Hilary Hickling, and Sonia Mills laid a tribute of flowers at the National Library of Jamaica in downtown Kingston, near the site of Seacole's birthplace, a boarding house named Blundell Hall. At the ceremony, Perkins read out the proclamation, which noted:

“whereas this, the time of COVID-19 outbreak when healthcare professionals have been similarly challenged by a pandemic, it is an appropriate time to mark her birth, life, legacy and example…”

Hickling, meanwhile, pointed to the use of indigenous plants in the tribute, noting the decision to “use our own to support our own.” Seacole would have been familiar with many of the flowers used in her honour, including the endemic Portlandia grandiflora and Thrinax parviflora (Broom Thatch).

Mills added that Mary Seacole’s statue, “standing very proudly on the grounds of St. Thomas Hospital,” is the only statue of a named Black woman in the UK, where much has been done to memorialise her. This year, on November 23, a large portrait of Seacole was unveiled at Guy’s Hospital in London.

A truly inspirational and proud day at Guys hospital for the Mary Seacole Trust, presenting a portrait of Mary Seacole which hangs in atrium 2. The power of Mary in symbolising diversity was palpable. Thanks to everyone involved #MarySeacoleDay pic.twitter.com/JCG2KItAWI

Dr. Elizabeth N. Anionwu, Professor Emeritus of Nursing at the University of West London, has contributed much to a deeper understanding of the life and times of Mary Seacole, refuting some of the myths and misunderstandings about her, including the incorrect perceptions that she wasn't recognised as a nurse, wasn't as decorated as she, in fact, was and wasn't worthy of being dubbed a “black historical figure.”

Back in Jamaica, the Mary Seacole Foundation's Anna Perkins told Global Voices via a WhatsApp note:

It's really exciting and gratifying to have Mary Seacole's life and legacy be given national recognition! She is a potent presence, whose adventurous, caring and entrepreneurial spirit can continue to inspire us, if we let it. We want to make her story known far and wide so that many, especially our youth, may be inspired.

She added that while the COVID-19 pandemic had interrupted some of the Foundation’s planned programmes, it is working on providing scholarships for two Jamaican nursing students in order to continue Seacole's work and legacy.

Although the UK has adopted Mary Seacole as a “great Black Briton” (she was the daughter of a “free” Jamaican woman and a Scottish army officer), it seems that she is finally coming into her own in the island of her birth, which she left for a life of adventure so long ago.