Protestors highlighted the increasing femicide and violence rates in Turkey 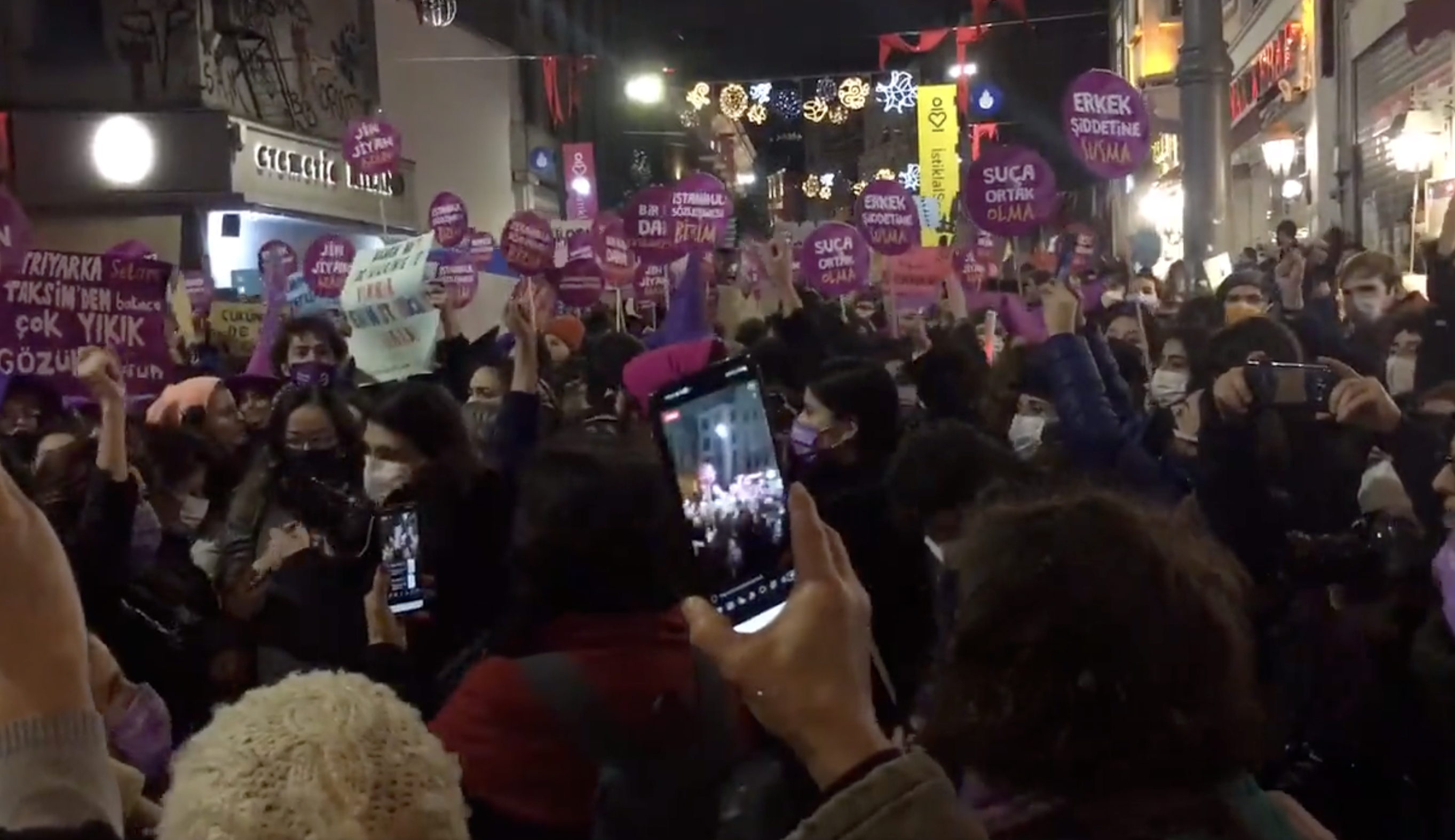 A screenshot from a video shared by DW journalist Julia Hahn.

Hundreds of women took the streets in Istanbul to mark the International Day for the Elimination of Violence Against Women on November 25. However, protestors were met with police violence, including tear gas and rubber bullets, as they tried to break through barricades to march on a busy pedestrian street. Similar protests took place across other cities, including the capital Ankara.

Women continue to be the hope, with their hopes, excitement, determination and enthusiasm. They have turned night into day on Istiklal Avenue.

The women groups were also joined by the LGBTQ+ activists:

Women and the LGBTIQ+ activists organized a protest in Istanbul, Turkey on November 25, 2021 for International Day for the Elimination of Violence against Women. pic.twitter.com/s22vPkt5nc

The main demand on the streets was for Turkey to rejoin the Istanbul Convention — a legally-binding human rights treaty created by the Council of Europe pledging to prevent, prosecute, and eliminate domestic violence and promote gender equality. Turkey announced its decision to withdraw from the international treaty in March of this year. In July, women across the country protested the official withdrawal.

But women's rights groups say words aren't enough, as Turkey continues to see increasing femicide rates. According to We Will Stop Femicide, a local platform documenting violence against women, a total of 225 women were killed between January and October 2021. A separate tracker documenting the names of women killed as a result of violence puts the number of victims at 353 in total for 2021. One of the most recent victims was 28-year-old Basak Cengiz, who was stabbed by a man who later confessed he did it out of boredom. The killer was charged with aggravated murder.

Cengiz's murder renewed the calls for Turkey to rejoin the international convention; however, authorities — including Erdoğan — continue to insist the domestic legislation is enough. “To us, women are the holiest creature. We will never allow their holiness to be tainted,” the president said reportedly last week, adding, “Thus, there's no need for the Istanbul Convention.”

The government's “Action Plan for Combating Violence against Women” was announced in July 2021 and includes goals such as reviewing judicial processes, improving protection services, and gathering data on violence. So far, it has proven futile. “The current laws are not adequate. We hear about women being killed every day, because the existing structure, both legally and implementation wise, is not adequate,” Ayşe Faride Acar, a Turkish academic overseeing the implementation of the Istanbul Convention between 2015 – 2019 told AlJazeera in an interview.

And the numbers speak for themselves. Berrin Sonmez of the Women's Platform for Equality recently told AFP that ever since the country withdrew from the convention in March, the sense of impunity has only risen. She said, “180 women were murdered between March and July 2021, and besides that, there have been 171 suspicious deaths. This is not a justifiable number.”

Erdoğan first expressed interest in leaving the convention in 2020. The final decision came after the president unveiled a human rights plan he says would “improve rights and freedoms in Turkey and help the country meet EU standards.”