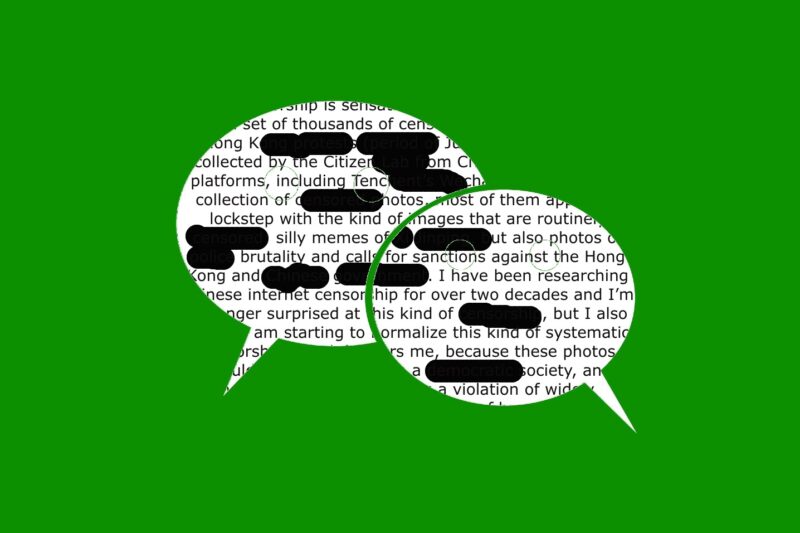 Rose Luqiu Luwei, a veteran journalist and director of the International Journalism Studies Master's program at the Baptist University of Hong Kong, recently published a research paper, analyzing how WeChat is used in Chinese government censorship campaigns. The paper, entitled “Loyalty to WeChat beyond national borders: a perspective of media system dependency theory on techno-nationalism” provides a multi-disciplinary analysis on why the Chinese diaspora is loyal to WeChat — a key arm in the Chinese censorship system.

Co-authored by professor Kang Yi, a political scientist, the research addresses how the Chinese government’s policies and WeChat, the most influential new media and communication tool used among mainland and overseas Chinese communities, mediate the Chinese diaspora’s interaction with the local and settlement in host societies. The researchers refer to such overarching techno-political force as “techno-nationalism” which often influences users’ habits, opinions, and behaviors.

Global Voices East Asia editor, Oiwan Lam, interviewed Rose Luqiu on her five-year-long research process and the challenges of techno-nationalism. The interview was conducted in Cantonese via video chat and transcribed into English.

OL: When did you start your research and how did you come up with this research idea?

Luqiu: I started this research back in 2016 during the US presidential elections. I was doing my Ph.D. in the US, and I joined several Chinese diaspora chat groups on WeChat.

The first incident that caught my attention was a campaign supporting a Chinese ethnic candidate Lindy Li in Pennsylvania. The mobilization, such as crowdfunding, via the WeChat groups, was very effective. The political rhetoric for the mobilization was that Chinese people had to support her because she was born in Sichuan, China, and thus could represent Chinese voices in Congress.

The second incident was mobilization supporting an ethnic Chinese police officer, Peter Liang, concerning his appeal on the charge of manslaughtering Akai Gurley. Through WeChat, the Chinese diaspora organized rallies in major cities in the US. I went to one of the biggest rallies in Philadelphia and observed that some Fujianese kinship groups led the protests. I started feeling that the mobilization was not that spontaneous as overseas Chinese kinship groups often have some sort of association with the Chinese embassy and consulates.

Then came the presidential elections. All the WeChat groups I joined were contained themes against Hilary Clinton in support of Trump. Hilary Clinton is more firm in human rights issues, and the Chinese authorities did not want to see her win. As for Donald Trump, people had little knowledge about his political orientation at that time. There were a lot of interesting election discussions on these WeChat groups, and Trump supporters were able to dominate the debates.

After I returned to Hong Kong, I included the mainland Chinese diaspora groups in my research.

OL: What explains the Chinese diaspora’s loyalty to WeChat? And how do Chinese media policies and techno-nationalism attain a global reach through WeChat?

Luqiu: A major factor is censorship or “coerced loyalty.” As other communication tools like Facebook and Twitter are unavailable in China. WeChat has a very special [monopoly] status in China. Regardless of your whereabouts, if you want to stay in contact with your friends and relatives in mainland China, WeChat remains their only choice. Also, if you have to do business or travel in China, you can't avoid using the tool. WeChat is a tech business. Yet, because of the censorship policy in China, when you have discussions on WeChat, you would be constantly reminded by other users to avoid raising sensitive topics, or else the group would be deleted, and the group administrator would get in trouble. So to protect your friends who are in mainland China and avoid future problems when traveling back to China, you will practice self-censorship.

The second factor is inertia or “habitual loyalty.” Understandably, language is a barrier in the host country. While the public channels on WeChat offer very rich information concerning the host country without such barriers, they become the key sources of information for the diaspora. WeChat has tens of millions of public channels, but they are all subjected to the content framework set by the Chinese government. Although public channels that distribute news and commentary seem to be owned and managed by individuals or private companies, many are still affiliated with state-owned media outlets or funded by the red capital.

OL: Can you elaborate on how public channels that operate overseas are controlled by the Chinese censorship system?

Luqiu: WeChat has set up a dual system in 2014: Weixin and WeChat. The latter is to serve the global market. The information flow between the two systems is asymmetrical as public channels registered under Weixin are accessible globally and within mainland China. In contrast, if registered under WeChat, the content would not be accessible within China. Seemingly independent public channels such as Gangpiaoquan 港漂圈 and North American Overseas Students Daily 北美留學生日報 are registered under Weixin in mainland China with mainland Chinese phone numbers even though their target audiences are outside of China. They are very influential and have a massive number of followers. However, there is a trade-off under the Weixin system as they have to abide by the mainland Chinese censorship system.

Even in more private communication channels such as group chat, sensitive messages sent by overseas Chinese are hidden from other mainland Chinese group members. With zero feedback, users would develop a habit of avoiding political discussion on WeChat.

Although the research studied three different groups of WeChat users in other countries, their user habits, particularly self-censorship practice, are identical.

OL: What are the impacts of such techno-loyalty on the user and the host countries?

Luqiu: It affects the integration of the Chinese diaspora with the society of the host countries. Although they have settled down, they are somehow segregated from the mainstream culture as they maintain their original social network and don't need to interact with the locals. They have all the information resources they need on WeChat, and as the diaspora circle keeps expanding, they also develop a strong sense of Chinese diaspora identity.

OL: In the introduction of your research paper, you mentioned Donald Trump’s executive order in 2019 that banned WeChat on security and privacy grounds. What’s your opinion on this kind of policy?

Luqiu: According to news reports, the decision is related to the presidential elections. The controversy touches upon the nature of WeChat, whether one considers it a foreign agent or a tool. People in an open society should have the confidence to compete with WeChat on the user market and gradually change their users’ behavior. However, I can also see that an open society can be very fragile as there are some rules that you have to follow while others can take advantage of these rules. The competition is therefore not that equal nor fair. In principle, we should all uphold freedom of speech and should accept all kinds of content platforms. But on the other hand, the other side practices strict censorship while taking advantage of open societies.

OL: People from host societies are getting more anxious about WeChat. In countries like Canada, Australia, and the US, some are worried that the mobilization on WeChat would result in election mongering or interference in local policies. Do you have any suggestions for handling such anxiety?

Luqiu: I think we have to take political participation as a positive development among the Chinese diaspora as this is a way for them to interact with and integrate into local societies. People have free will and they do appreciate core values in open societies. The issue at stake is the systematic exploitation of the tool that instrumentalizes the users for the purpose of achieving certain political agendas. A policy level approach, such as anti-monopoly, to create an equal and fair ground in the new media market would be more appropriate.