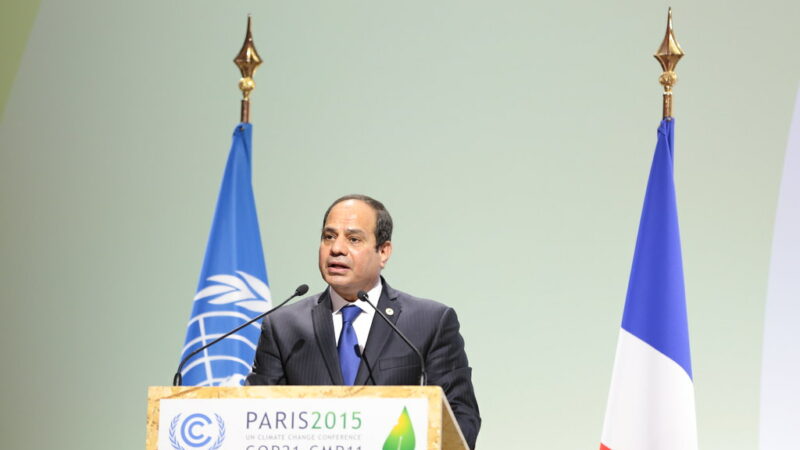 Egypt's President Abdelfattah El-Sisi, whose reign is described as Egypt's worst in recent history in terms of human rights violations and censorship, has found a strong ally in France which has proven to provide technology, intelligence and manpower to spy on, and kill, civilians. Image published under license CC BY-NC-SA 2.0 license.

France has provided Egypt with intelligence and technologies that enabled the North African state to commit crimes and severe human rights violations under the guise of fighting terrorism, the French independent investigative website, Disclose, has revealed.

Based on hundreds of secret documents that are circulated at the highest levels of the French state, Disclose ran a week-long series of investigative reports that began on Sunday November 21, showing “responsibility of France in crimes committed by the dictatorship of Abdel Fattah al-Sisi in Egypt,” including aerial strikes against civilians,

Following the July 2013 military takeover of power in Egypt and the uprooting of the country's first-democratically elected president, the European Union's Affairs Council had declared on August 21 that its member states “have decided to suspend export licenses to Egypt for any equipment that could be used for domestic repression”. However, a 2018 report by the International Federation for Human Rights (FIDH) said that “at least eight French companies –  encouraged by one government after another – have nevertheless profited from this repression to reap record profits. Between 2010 and 2016 French arms deliveries to Egypt increased from EUR 39.6 million to EUR 1.3 billion.”

According to Disclose, the French presidential palaces, whether under Francois Hollande or Emmanuel Macron, were well informed of the role France played in these violations, but took no action to stop it.

One of Disclose's reports showed that an intelligence mission which began in February 2016 under the name Operation Sirli to combat terrorism was derailed into a campaign of arbitrary executions. The mission, according to Disclose, was discussed in 2015 by the two countries’ top military and intelligence chiefs and revolved around securing Egypt's borders with Libya, a country torn by civil war. Cairo officials expressed concern over terrorist activities in its western deserts, which France was happy to assist with as the latter had just completed the purchase of 24 Rafale fighter jets and two multi-purpose frigates (FREMMs) for a total value of 5.6 billion euros.

A 10-member French team deployed to Egypt for this mission was equipped with Merlin III, a light aircraft for surveillance and reconnaissance, which would serve as the team's ears and eyes. However, in the absence of a cooperation agreement that explicitly defines the purpose and framework of the mission, Egyptian authorities quickly strayed away from the theoretical aim of the mission – identifying terrorist threats.

But very soon, the French team came to realise that they were being used to facilitate the murders of civilians who were suspected of smuggling activity. The team informed their hierarchy of this at regular intervals – over one year, and then two and, finally, three years – but in vain.

For the population of Egypt's Western Deserts, the majority of whom live under poverty lines, smuggling cigarettes, drugs or weapons, as well as petrol rice, cereals and cosmetic products, provides much-needed income that is too irresistible despite the risks associated with it.

During the duration of the mission, the French state had accepted an Egyptian demand to create “a short loop for information transmission” from the plane to the base, the aim of which, Disclose said, was to allow the Egyptian air force to fly to the zone to “treat” the target as quickly as possible.

As a result of this “short loop”, the French forces may have been involved in at least 19 bombings of civilians between 2016 and 2018, according to the classified documents obtained by Disclose. The report said:

The strikes often destroyed several vehicles, and the number of victims could be as many as several hundred. According to the criteria of United Nations General Assembly resolution 56/83, the complicity of France in these illegal executions could be established.

Among the innocent civilians killed as a result of these raids, Disclose said, was Ahmed El-Fiky, an engineer, and two of his colleagues, whose pick-up truck was targeted as they worked on the paving of a road close to the oasis town of Al-Bahariya, which has a population of around 32,000. The family of the slain father of three were pressured into conceding that the reason behind his death is unknown, the report stated.

Repeated secret military reports were filed by members of the mission to the Elysee Palace, stressing the need for a cooperation agreement to restore the priority of the mission as fighting terrorism, and pointing out that fighting terrorism comes in third place in Egyptians’ goals – after  trafficking and illegal immigration. Concerns voiced in one such report, issued on November 23, 2017, included:

However, French president Macron continues to support the mission, which remains deployed in Egypt.

Among Disclose's revelations is how the little-known, Luxembourg-based company CAE Aviation, has provided employees – pilots, analysts and technicians – to serve as part of the French team in the Sirli Operation. The company was authorized by its contract with the French intelligence, to provide a light plane for surveillance and reconnaissance – or ALSR – along with an operating team of six, made up of two pilots and four technicians. The company's contract with the French intelligence is protected by French defence secrecy laws.

The website revealed that two CAE Aviation pilots and technical experts accompany regular military personnel during the missions, which can last for between five and six hours. The two other CAE technicians remain at base, to centralise the information sent back to them from the plane, before they're transmitted to the Egyptians. Disclose noted:

This precious aid provided in controlling the desert region would make them direct witnesses of repeated strikes by the Egyptian military against civilians.

Furthermore, the website also showed that three French companies – Nexa Technologies, Ercom-Suneris, Dassault Systèmes – have provided Egypt with a massive cyber-surveillance system which was used against NGOs, journalists, activists and many others whose phones and laptops were tapped by the state.

Following the publication of Disclose's reports, the website was added to hundreds of other websites which Egypt has blocked.

Not surprising, Sisi regime is familiar with online&media censorship in the name of so-called counterterrorism

You can use a VPN/Tor.

The reports sparked a rich input from commentators online, presenting analysis to the security, political and human rights situation in Egypt, and criticizing Paris’ support of violations committed against civilians.

- This level of operational integration with a foreign nation is something we haven't really seen since the expulsion of the Soviets from Egypt.

Not only tolerating foreign presence (as it always has to some degree) but welcoming foreign mil/int ops in country. Where else? pic.twitter.com/KWadj4pVVZ

Other analysts also highlighted the importance of the information that was revealed for the first time in the investigative series:

There's no way that France was unaware of all this. The fact both sides maintained enough trust and willingness to run these surveillance operations is quite a revelation indeed; plus, the papers are the first time to see Egypt's priorities on the border so clearly documented.