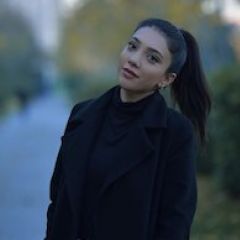 Screenshot from Baku Media Center video on the military parade held in Baku on December 10, 2020.

This story was published in collaboration with QueerRadar.

Three years ago, Alp Aliyev, received a notification from the State Service for Mobilization and Conscription that he was required to enlist the army. Alp did not think he would fit into the military culture given his fluid gender identity and lifestyle. He also faced pressure from his relatives. He was told that until he completes the mandatory military service, they would not accept him as a man.

Azerbaijan implements mandatory conscription for all able-bodied men between the ages of 18 and 35. The compulsory service normally lasts 18 months. According to existing national legislation, alternative service on religious grounds is also possible however Azerbaijan has yet to adopt a law on alternative civilian service or outline the process. Temporary deferrals can also be granted.

When it was finally time for Alp to enlist, he visited the Commission on Preliminary Military Registration and told them he was queer. His service was deferred based on Article 18, paragraph b of the Regulation on Military Medical Examinations, which states a person is considered unfit or partially fit for military service on the basis of personality disorders. In Azerbaijan, this is how those who identify as LGBTQ+ are exempted from compulsory military service.

In addition to Article 18/b, LGBTQ+ enlistees are also categorized under Article 17/b, which indicates reactive psychoses and neurotic disorders.

The practice of using these two articles also violates the state constitution as well as the country’s obligations under international human rights treaties, explains lawyer Samed Rahimli. According to Rahimli, if that specific paragraph (Article 18/b) is used for its intended purposes, accompanied by individual medical assessments, then it is not inherently discriminatory. “However, in practice, when the paragraph is systematically used in the context LGBTIQ+ based on their sexual orientation and gender identity, it is discriminatory.”

The World Health Organisation officially declassified homosexuality as a mental illness in 1994. “In Azerbaijan, although homosexually is not considered a disease in any of the legal documents, when it comes to military service, it is registered and documented as either neurological/psychological or personality disorder,” explains lawyer Ruslan Aliyev.

For Alp, he felt discriminated against from the moment he informed the Commission on Preliminary Military Registration of his gender identity. Following a medical examination, he was referred to a psychology dispensary in Baku. “When they asked me questions, I joked when responding. At the end, the doctor asked me, ‘do you know why you are here?’ I told him, ‘I did not.’ ‘Because you are crazy’ he told me, ‘this is why they have sent you here.’ I laughed at this too,” said Alp, adding, “it was a strange experience. You were basically labeled crazy just like that.” Even after obtaining a deferral, potential conscripts must revisit the commission every three years until they turn 35.

According to the Democratic Initiatives Institute's 2019 report on the state of LGBTQ+ rights, anyone labeled under Articles 18/b and 17/b can be denied equal employment opportunities especially within government institutions. The report concludes that when homosexual men are dismissed from the service under Articles 17 and 18, “they are effectively deprived from equal employment opportunities.”

The report also explains that in practice, those who identify as LGBTQ+ are free from military service. However, in the absence of any legal protections for sexual orientation or gender, community members are often unaware of how to navigate military conscription. In fact, many LGBTQ+  people are afraid of telling their families about their orientation and hesitant to out themselves to the military commission as well.

Lawyer Samed Rahimli says it is not uncommon for employers to require a military ID during the hiring process. In such circumstances, employers learn about potential employees’ sexual orientation regardless of the employee’s wishes. Rahimli explains:

This can create problems finding jobs for those who identify as LGBTIQ+. In addition, the registration of those who are deferred from the conscription based on paragraph 18b remains in the database of mobilization structures. This information could then be used by the government structures and institutions to prepare lists (blacklist) of those who identify as LGBTIQ+. And whether this information is then shared with other government institutions, we do not know.

Natig Salimov (not his real name), who works as a business consultant in the capital Baku was troubled by this: “It did not matter to me whether it said psychological disorder. What concerned me more, was the employment within a government position if such an opportunity came my way.” To avoid this stigma, his family deferred Natig’s military service by obtaining a fake medical report that diagnosed Ruslan with a “kidney or thyroid problem.”

Natig was also concerned about the treatment he might face in the military as a queer person. “The military system is totally different from civilian life. There, it is the physical strength that matters. The strongest example of patriarchy is there. The environment there is distant to gender and sexual identity issues,” explains Natig.

Emil Huseynov, 21, also feared he would face discrimination in the military for identifying as LGBTQ+ and therefore, wanted to avoid military conscription. The first time he was conscripted was in 2018. At the time, due to active military operations between Armenia and Azerbaijan, his family did not want him to go. Unaware of his sexual identity, his family was able to secure a medical report that concluded Emil suffered from spinal curvature. He was labeled unfit as a result.

In recent years, the Azerbaijan government intensified crackdowns against the LGBTQ+ community. In 2017, at least 83 people were detained by the police for being gay or transgender. The detainees reported being tortured and blackmailed. The same year, at least four Azerbaijani citizens who identified as LGBTQ+ committed suicide.

In 2018, the Israeli newspaper Haaretz reported that the Azerbaijan government was using Israel’s Verint Systems surveillance equipment and software to identify citizens’ sexual orientation through Facebook.

More than a dozen LGBTQ+ people were arrested in 2019, most of whom were transgender sex workers who were solicited and then arrested according to Meydan TV and Minority Magazine reporting.

In March 2021, Minority Magazine reported a new movement calling itself “Pure Blood” which was mobilizing via Telegram to target  LGBTQ+ people in Azerbaijan.

Then in the summer of 2021, during PRIDE month, Minority Magazine documented more attacks against LGBTQ people.

In its most recent Rainbow Map ranking by Europe's International Lesbian, Gay, Bisexual, Trans, and Intersex Association's (ILGA Europe), Azerbaijan, ranked last. ILGA has been surveying the LGBTQ+ people in 49 European countries since 2009 through their Rainbow Map and Index.

Military expert Uzeyir Jafarzade argues that if LGBTQ+ people are recruited for military service, then there must be a range of mechanisms in place to protect them. “Special attention must be given to their treatment with weapons as well as the relationship between them and other conscripts. For this, all institutions must work together,” explained Jafarzade.