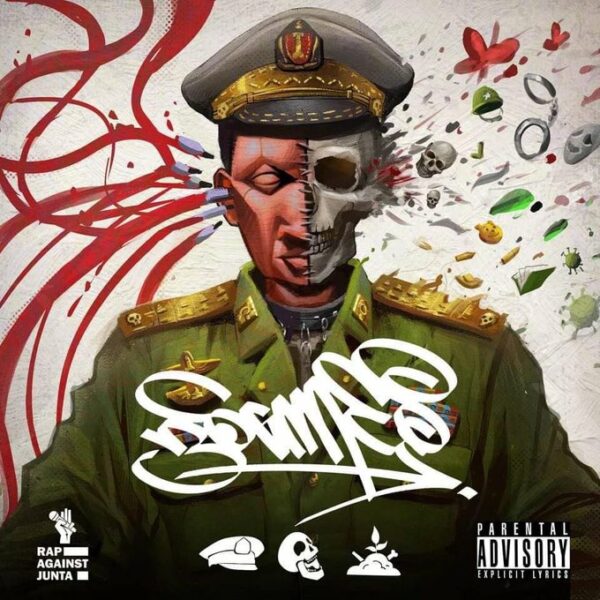 The cover of the album produced by Rap Against Junta from Twitter [1]. Used with permission.

Myanmar rappers have found ways to use their art to protest the oppressive military junta, which grabbed power [2] in February 2021. Aside from joining rallies, rappers have penned songs condemning the atrocities of the junta. They banded together and formed the Rap Against Junta as the “Myanmar Hip-Hop scene's creative resistance against the Junta that staged illegitimate coup.” This alliance involved rappers, producers, disc jockeys, sound engineers, promoters, organizers, dancers, and graffiti artists. This is their defiant manifesto [3]:

We are all leaders using Hip-Hop elements to reject military coup. We could be shot in the head or brutalized if arrested but, fuck it, we would rather die than to live in fear.

- to express our rage against Junta's ruthless crimes in Myanmar
– to bring down the dictatorship and battle for federal democracy
– to use Hip-Hop as a creative means to bring unity, justice and peace

WE ARE ALL LEADERS.
JUNTA MUST FAIL.

Their collaboration produced an album [1] which was launched [4] in October. Titled DickCouncil [ဒစ်ကောင်စီ], a wordplay on the Burmese term for “Military Council,” the album featured [5] 11 songs by 15 rappers. This is an excerpt from a statement [6] they released during the album launch:

The artists use their unique perspectives and critical voices to be heard across the world, using hip hop as a powerful communication tool. Myanmar hip hop will never be silenced. We come together, not because we are the same but because we are united as one.

Despite its political nature, DickCouncil is a hidden gem for those who have limited knowledge of Myanmar. Written in the Burmese language, the album ranges from robust Gangsta Rap, Punk Rap, Rock Rap, to playful Funky Trap and even soft electronic beats. Hip Hop has always been the tool of the unheard, and Rap Against Junta is here to put their perspectives in raps and to tell the world the people of Myanmar will not stop fighting for democracy.

A member of the Rap Against Junta told Global Voices in an interview that it took them three months to compile the songs in the album. They also clarified that they do not simply want to challenge the junta but to destroy it.

We had a hard time during the collection of music because of COVID-19 third wave (in Myanmar). We are not challenging them… We tearing them apart… We use HipHop as a medium to connect all the people and battle towards junta regime.

The album was praised by rappers [8] from other countries who are also standing up against the anti-democratic policies of their respective governments.

Below are some of the songs produced by Myanmar's anti-junta rappers: