Protests sweep Turkey as Lira plummets to an all-time low 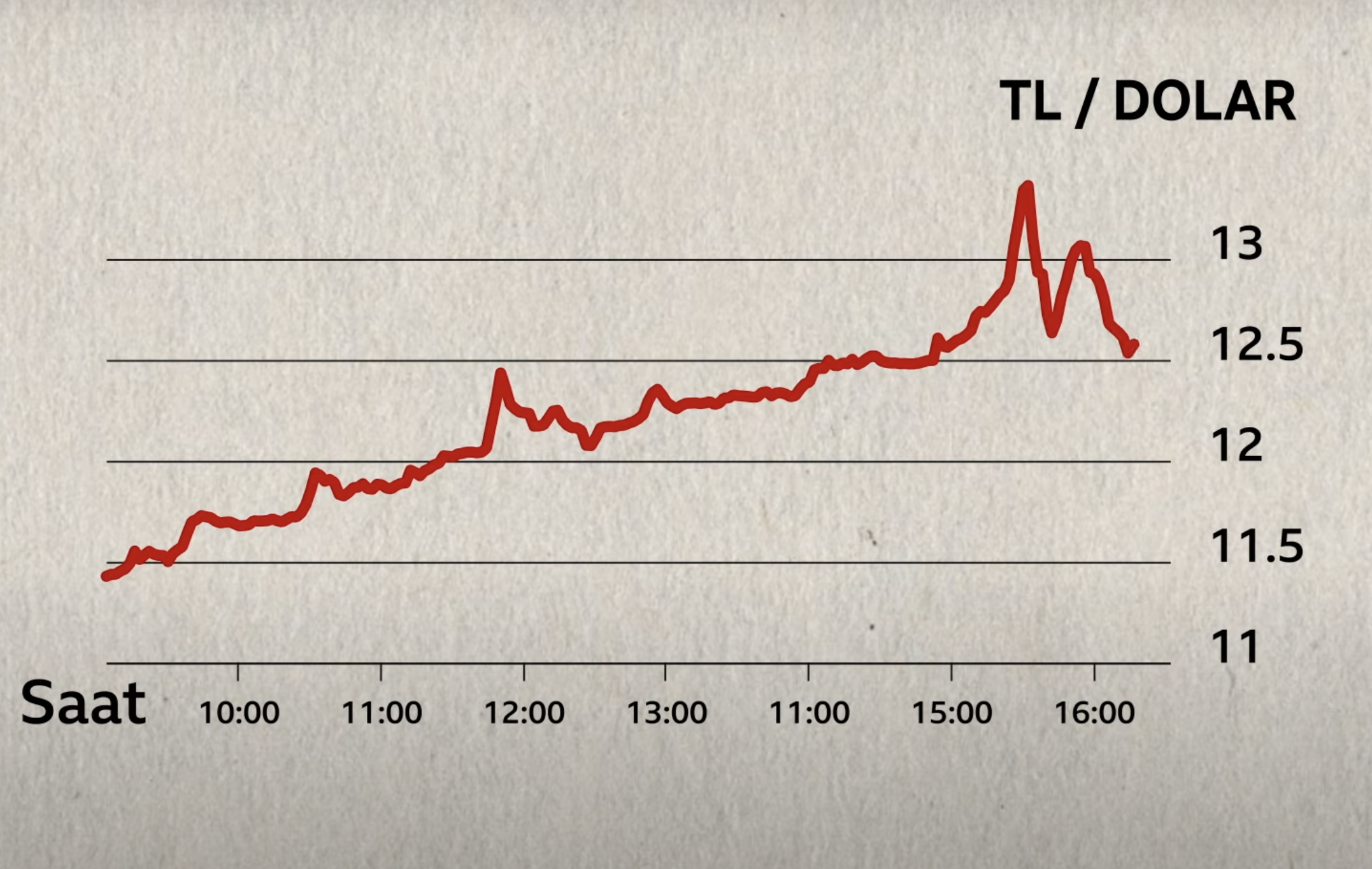 A screenshot from a BBC Turkish news report video.

Protests erupted across several cities in Turkey in the evening hours on November 23 after the Turkish national currency hit a record low against foreign currencies earlier in the day. Residents took the streets, calling for the government to resign after President Recep Tayyip Erdoğan vowed to keep interest rates low despite high inflation a day earlier. On Twitter #AKPIstifa [AKP resign] was trending along with #Dolar12TL.

It was the lowest plunge for the national currency in 20 years, “briefly plunging past 13 per dollar for the first time ever,” reported Bloomberg.

The national currency has lost about 40 percent of its value since January 1, 2021, reported AP on November 23.

Commenting on the current economic environment and ruling Justice and Development policies, Kerim Rota, head of economic policy at an opposition Future Party told Bloomberg, “It is as if they put a child in charge of a nuclear power plant.”

In his defense, President Erdoğan called the ruling party's economic policies “an economic war of independence” in a televised address to the nation on November 22. He said:

As a country with great knowledge and experience in financial crisis management just like in every area, we are determined to make use of the opportunities offered by the critical period the world is currently going through. We see the games those who seek to push our country out of the equation play over exchange rates, interest rates and price hikes as they used to do in the past, and we display our will to move forward with our own game plans.

Kemal Kilicdaroglu, opposition leader, accused the president of turning the national currency “into a discredited currency.” The opposition leader also criticized the Central Bank, which has been closely following President Erdoğan's demands to keep rates low. “The institution which is responsible for price stability cannot bring about price stability,” said Kilicdaroglu about the Central Bank's lack of power and decision making.

President Erdoğan has replaced three Central Bank governors since 2019, demonstrating his grip over the Central Bank and its monetary policies. The most recent replacement occurred through an overnight decree published by the Official Gazette in March 2021, when Naci Agbal, a former finance minister was replaced with Sahap Kavioglu, a banking professor and columnist in a government newspaper. While there were no official explanations for this replacement, pundits said the sudden replacement was linked to Agbal's decision to raise interest rates, which goes against President Erdoğan's unorthodox theories about monetary policy and its impact on inflation. Agbal was in his position for just four months before getting replaced by Kavioglu, who happens to share the president's monetary policy views. Under Agbal, the Turkish lira was indicating a recovery as he raised the interest rate to 19 percent from 10.25 percent since taking over the office in November 2020.

Meanwhile, the country's former prime minister, Ahmet Davutoglu warned the president to switch course before it is too late for the economy.

In response to the growing currency crisis, and fearing further price hikes, people took their frustrations onto streets across multiple neighborhoods and cities. Some brought out their pots and pans.

Tencere tava havası: The sound of neighborhood protest after a brutal day for Turkey’s economy. pic.twitter.com/NWvPrI5TXJ

People in Ankara took to the streets in call for government’s resignation after Turkish lira crashed to historic low. pic.twitter.com/pAl5FEt5cd

Meanwhile, a presenter on the pro-government TV channel TGRT tried assuring viewers that the spike in the exchange rate has reduced minimum wage, which is a good thing because it is making labor force very cheap in Turkey.

A pro-government channel news banner in Turkey:
“We're the country that will work the cheapest.” Complete with plummeting minimum wage. Ok. https://t.co/FCHvuzcJV9

Students were also among the protesters. In Ankara and Istanbul, students from the Middle East Technical University (METU) and Bogazici University were seen organizing on campus and on the streets.

The protests by ODTU students continues. They continue changing “AKP resign,” “Government resign” at campus door A4 where police prevented them from leaving.

Bogazici University students are also on the streets, chanting “Either all of us together, or nobody at all.”

Speaking to BBC Turkish Service, director of research at Teneo, a consultancy firm, Wolfango Piccoli, said, “Turkey is discovering the hard way, on how currency crisis, might take longer to materialize and anticipated but when it happens it can accelerate very quickly and can become very difficult to control.”

Turkey's financial future has plunged into uncertainty and it is impossible to make any projections at this point, said economist Arda Tunca in an interview with BBC Turkish Service. “I have witnessed the crisis in 1994, in 2001, and the global financial crisis in 2008. In each of those crises, there was uncertainty but at least at the time, it was possible to make projections about the right steps to take and where they would come. But currently, it is impossible to manage the current uncertainty. We are living at a time when we are beyond economic rules.”