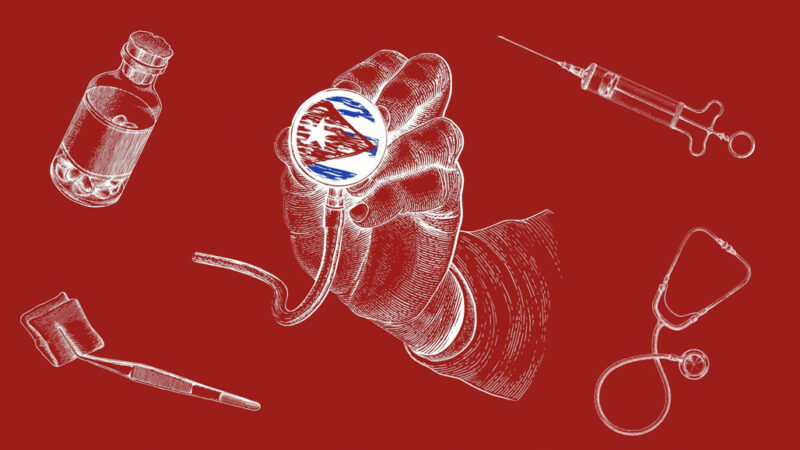 This article is an excerpt from an investigation [1] by Diario de Cuba [2] and CONNECTAS [3], republished in Global Voices.

Cuba's million-dollar health business is based on two pillars: a high-quality service on the island for foreigners, and the massive exportation of health professionals through medical missions. This lucrative model has allowed the government to spread propaganda and sell an altruistic façade, while Cubans have to endure hospital collapse and the doctors who are taking part in these missions are subjected to all kinds of violations of their rights.

The pandemic caused by the coronavirus gave way to an ideal situation to relaunch the promotion of Cuban medical services, which had suffered a decline between 2018 and 2019 after the end of Cuba-allied governments in Brazil, Bolivia, and Ecuador. In addition to reviving overseas contracting, the pandemic served as a framework for Havana to revive the propaganda surrounding the medical missions, which included a campaign for the Nobel Peace Prize for the group of professionals sent to work to contain Covid-19.

In October 2021, Cuba's deputy health minister, Dr. Regla Angulo Pardo, announced that 57 teams made up of 4,982 health professionals had collaborated in the fight against Covid-19 in 41 territories in Latin America and the Caribbean, Africa, and Europe.

The dream of the Nobel Prize did not prosper. Instead, Cubans became weary, and their demonstrations made the front pages of the world's major media. The collapse of the healthcare system and medicine shortages were some of the triggers of the historic protest on July 11, 2021. The protest was also fuelled by the uptick of Covid-19 infections and deaths since mid-April of this year.

The renewed Cuban propaganda was not enough to silence the irregularities surrounding the country's medical missions model for years, nor to distract from the crumbling health system. Diario de Cuba and Connectas investigated and compiled numerous testimonies [4] of professionals who have participated in such missions in Venezuela, Brazil, Bolivia, Ecuador, and even Saudi Arabia, and who denounce human rights violations.

The testimonies also reveal the current landscape of the health system in Cuba: the contrast between the health service for Cubans — whose deterioration has been going on for years but has accelerated with the pandemic — and the “health tourism [5]” for foreigners, which continues to be internationally renowned.

How did Cuba become known for its medical missions?

In 1984, the Cuban government created the Family's Doctor and Nurse program (Programa del Médico y la Enfermera de la Familia), with the objective of providing health coverage to the entire population of the island. Although the program became a world reference, the fall of the Soviet Union and the crisis that ensued in Cuba showed that it lacked a plan for sustainability.

Then, salvation came with the rise to power of Hugo Chavez in Venezuela. On Oct. 30, 2000, Cuba and Venezuela signed an agreement [6] by which the Cuban side pledged to send doctors who would offer free services in places where health coverage was deficient and to train Venezuelan personnel. Venezuela, for its part, committed to sending 53,000 barrels of oil per day.

In 2011, the Cuban government carried out a series of privatizations following the Russian model, in order to make the state-owned economy fit into a free-market world. Thus was born the Comercializadora de Servicios Médicos Cubanos, the corporation that took over the business of exporting health personnel. Through this entity and thanks to the alliance with Venezuela, it was possible to export Cuban specialized labor on a massive scale, as well as to fulfill a dream dear to Fidel Castro: to export the revolution and expand its influence worldwide. In this way, in addition to being an economic asset, the medical missions also became a diplomatic asset [7].

The massive exportation of health professionals also solved a problem: the lack of employment opportunities for such an excessive number of doctors in Cuba. But what was a solution for the Cuban government has been an ordeal for many of the participating doctors. Testimonies gathered in this journalistic investigation, such as that of Dr. Elisandra del Prado Torres, reveal that the Cuban professionals were not allowed to meet and practice their religion or choose a romantic partner.

In addition to being victims of violations of their freedoms and fundamental rights, Cuban health professionals denounce having been forced to engage in political lobbying. A doctor who was head of an Integral Community Health Area (Área de Salud Integral Comunitaria) in Venezuela recounted how they had to meddle in local politics. “I was in charge of the Asic Caribe River, Arismendi Municipality, Sucre State. There I was forced to support the mayor in the reelection campaign. Every day I participated in meetings to map out strategies. All this with a Cuban security advisor named Miruslava. We practically had to tell the mayor how to act.”

Despite the pressures placed on professionals who participate in these missions, the alternative of not going is even worse. The difference in salary between staying in Cuba or joining a mission is so significant that even though healthcare professionals have to pay more than 75 percent of their salary to the authorities when they choose to work outside the island, it is still considered a more profitable option. In addition, anyone who refuses to go on a mission can be branded as counterrevolutionary and be punished, such as being assigned to a job in a distant town. Moreover, anyone who escapes from a mission is forbidden to return to Cuba for eight years.

The model that was first implemented in Venezuela was reproduced in several countries but was especially promoted in Brazil with the Mais Medicos program, in which at least 18,000 Cuban professionals participated over a period of five years.

Where do the substantial resources collected from these missions go? During the first half of 2021, the government allocated 45.5 percent of the budget to business services and real estate activities focused on international tourism, while only 0.8 percent went to public health.

Meanwhile, the health situation for Cubans is dire. The lack of medicines, oxygen, gasoline for ambulances and the general deterioration of the system is already widespread in the country. Social networks have become the stage where citizens complain about this situation, even those who are followers of the regime.

The contradictions in the Cuban healthcare system have worsened during the pandemic, the same one that enabled the government to relaunch its missions around the world. While the most basic medicines are scarce, more vaccines against Covid-19 are being developed in Cuba than in any other Latin American country. Yet millions of these doses have been sold to other countries when only 40.3 percent of the Cuban population was fully vaccinated.

In other words: business and politics abroad, neglect at home.