Women victims of violence report lack of police interest in their plight. 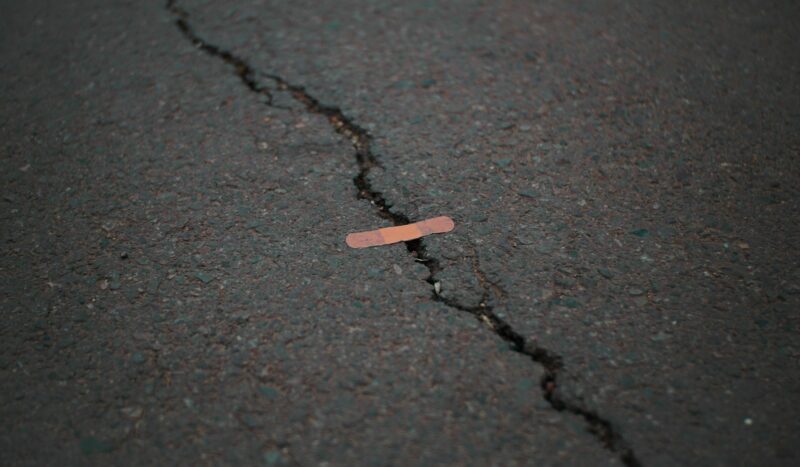 Photo by Luis Villasmil/Unsplash, free to use under the Unsplash License.

This story by Amina Sejfić was originally published on Balkan Diskurs, a project of the Post-Conflict Research Center (PCRC). An edited version is republished by Global Voices as part of a content-sharing agreement.

Due to the deep-rooted patriarchal structure of society in Bosnia and Herzegovina (BiH), domestic violence is often perceived as a corrective measure of the strong over the weak, which must not go beyond the boundaries of the home. As society shut its eyes to this increasingly pronounced problem, silence screams behind closed doors, leaving victims to fight the perpetrators on their own.

Gender-based violence in public discourse has a recognizable form — bruises, bloody wounds, cut lips, tousled hair, broken bones, deep stares, downcast eyes. But some bruises are not visible; they are wounds that only one person knows, a look disguised in normal life.

Although there is a somewhat satisfactory legal framework for prosecuting gender-based violence in BiH, in practice, things are not moving in the right direction. Inadequate protection, mistrust in the work of competent institutions, the lack of a unified system for collecting data on victims of gender-based violence, and non-acceptance and non-reporting of violence often takes victims on a journey with no return.

The four most well-known types of violence that constitute gender-based violence are physical, psychological, sexual, and economic violence. Economic and psychological violence, which are relatively recently recognized categories of violence, have long been neglected and are often overshadowed by physical and sexual violence since they are the most visible.

Violence is much less visible in the form of full or partial control of money, prohibition of work, sabotage of attempts to find or keep a job, and verbal diminution of a woman’s value.

Nura* (53) says that her life with her parents was extremely difficult and that they married her off when she was less than 18 years old. That’s when her nightmare began.

“When I got married, he immediately told me that the woman’s place is in the house. I took care of both him and his parents, but he was too stingy to give me one Bosnian mark. He also used to hit me, but the real chaos started after his parents’ deaths. I was never good enough for him after their death. He blamed me for everything, and the beatings and humiliation became more frequent.”

Nura is not alone in her story. Many young girls and women share her fate. Ajla Aljić (24) is one of them.

“I first experienced violence after I got married at 20. My husband was the one to do it, but at the beginning, I was not aware what was happening,” says Aljić, emphasizing that she believed that things would change, but they only got worse over time. “If he failed to confront me with words, he would resort to physical harassment,” she said.

The incidence of these two forms of violence is higher among women living in economically poorer households, among women who approve of patriarchal attitudes, and among women whose partners have problems with alcohol and drug consumption.

The traditional role of women

“When a man cannot fulfill his role as the breadwinner of the family, he takes out his frustrations through domestic violence,” explains Lejla Mušić, professor at the Faculty of Political Sciences, University of Sarajevo.

Psychological and economic violence are punishable forms of violence, according to the law in BiH. They are also recognized as punishable forms of violence by many international treaties ratified by the state. But these two types of violence are not often recognized by the public due to the patriarchal structure of society, which implies that it is the man who controls the money and supports the family. Although women’s status in BiH today is more favorable than in the recent past, it is still not satisfactory.

“Women face various challenges in all spheres of society, and they still have traditional roles, particularly in rural areas, where they are often exposed to multiple forms of domestic violence,” says Sanja Sahačić, a psychologist and coordinator of the Safe House in Sarajevo.

Nura shared, “He forbade me to see my relatives. I only saw my parents if he let me. Everything he would earn, he would spend on alcohol, and I was expected to put lunch on the table every day,” adding that she had no way out because her husband’s violence was “her shame.”

When Ajla decided to turn her back on the life she had lived for four years with her two children (her two-year-old daughter and one-month-old baby), she had no permanent job, no apartment, and no car. But she had to do it for her children.

“I began to enslave myself and turn into someone I am not. He made me a very depressed person, and I let him do that. I decided it was too much for the kids. I didn’t want them to grow up thinking that this was normal,” says Aljić, emphasizing that we owe our children a beautiful life with love, education, and security. “Your children are not safe if you are not safe — if they watch their father abuse you.”

Silence is not golden

Centuries of a mentality molded around the fear of the unknown have pushed gender-based violence under the rug. Sahačić emphasizes the media’s critical role in responding to this problem because “women should be encouraged to report violence, and citizens should remain sensitized to gender-based violence.”

Women victims of violence often suffer from feelings of insecurity, guilt, fear, and feelings of loss — they also crucially lack information about whom they can ask for help. Violence against women is often declared a “woman’s problem,” both due to inadequate media coverage and the systematic failure of the state’s response.

Ajla Aljić points out that she reported her husband to the police, but they were “cold and disinterested.”

Economic and psychological violence are based on the control of another person. Fully or partially controlling someone’s finances is economic violence. Due to the survivors’ economic dependence on the perpetrators, they cannot easily get out of the relationship, especially if they have no one else to turn to. Economic violence is often accompanied by manipulation, verbal insults, blackmail, and threats, usually leaving them without support. Vulnerability in the labor market also increases this vulnerability in partnerships.

The Safe House (Shelter) in Sarajevo, which has housed 2,138 beneficiaries since its establishment (771 women, 1,013 children, and 354 girls), carries out various economic activities to empower women. Sahačić emphasizes that reducing the inequality of women and men in the labor market necessarily contributes to women’s empowerment.

The Center for Women of the Foundation of Local Democracy provides training for women to help them develop entrepreneurial ideas, and women there are often financially supported.

Considering all the disadvantages the labor market already has for woman — the inability to find a job because you are a woman, overtime, underpaid work, non-affirmative perceptions in society about women — no form of violence that exists should remain private.

According to Professor Mušić, the non-affirmative image of women present in public discourse diminishes the women’s value to their physical beauty; that patriarchy succeeds when only a few women are in power.

*Nura is a pseudonym used to protect our interlocutor’s identity.