Party-list seats were first reserved for marginalized sectors of society 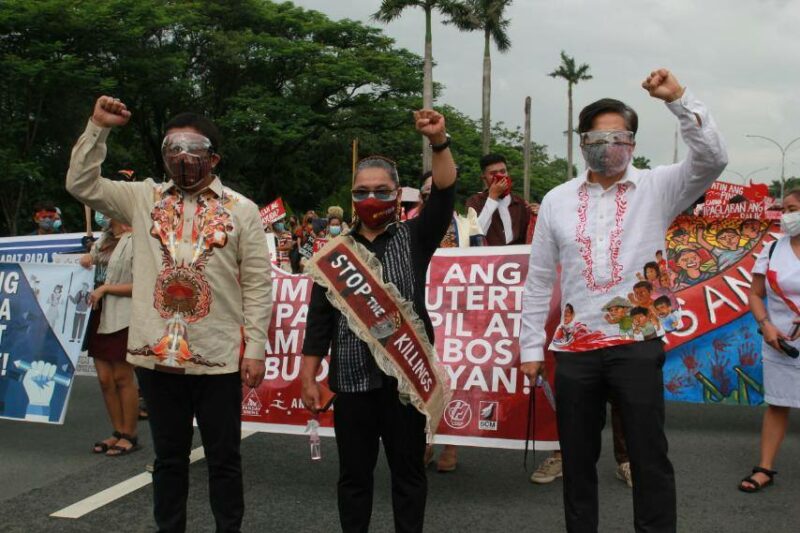 The “party-list” system, originally designed to provide space for the democratic representation of marginalized sectors in the House of Representatives of the Philippines, has been taken over by political dynasties.

The inclusion of the party-list elections in the electoral system was a result of the political struggle against the Ferdinand Marcos dictatorship which was toppled by the People Power Revolution in 1986. Before the constitutional amendment that enabled the party-list system, it was almost impossible for the marginalized sectors to be represented in Congress. Elected positions from the municipal up to the national levels were monopolized by political dynasties as, historically, elections were won by those who had “guns, gold and goons.”

Article II Section 26 of the 1987 Constitution declares that the “State shall guarantee equal access to opportunities for public service, and prohibit political dynasties as may be defined by law.” However, to this day, no anti-dynasty law has been promulgated by the Congress, which is dominated by political dynasties, though a bill nearly succeeded in being approved in the 15th Congress. The bill passed the first and second readings but failed to make it in the final plenary voting. With the enactment of the Party List law in 1995 marginalized sectors gained space in the elite-monopolized Congress. This allowed sectors such as women, workers, farmers, indigenous peoples, and cooperatives to come together, and build coalitions to participate in government. Foremost among the successful party-list organizations were Left-leaning groups, for example, Bayan Muna (People First). Though outnumbered by members of political dynasties, party-list representatives became “fiscalizers” of the people within the legislature.

Some political observers suggest that the party-list system favors a more democratic representation. For instance, among 53 democracies around the world where there are single-member districts, only 7.3 per cent of legislators are women, but in legislatures elected entirely by a party-list, women make up 17.2 per cent of members. But not in the Philippines. Instead, political dynasties saw this system as a backdoor entry to Congress, a means to broaden their turfs and get access to pork-barrel benefits. For example, the son of former President Gloria Arroyo has served in Congress as a party-list representative. Political dynasties-sponsored party-lists win by cheating, vote-buying and patronage politics.

Aside from political dynasties, even billionaires have become legislators by registering as representatives of marginalized groups. For three years now, the country's richest congressman has been Rep. Michael Romero of party-list group 1-Pacman or One Patriotic Coalition of Marginalized Nationals. His main family business develops and operates port facilities in the country, including the Manila North Harbor.

Veteran lawmaker Edcel Lagman, one of the principal authors of the Partylist System Act, emphasized that:

The purpose [of the system] is to afford and guarantee the marginalized sectors of having representation in Congress which they cannot win in the traditional district elections.

But in 2013 the Supreme Court decided that the party-list was not a reserved-seat system for particular sectors but a system of proportional representation where all types of organizations, including political parties, could participate.

Retired Supreme Court Chief Justice Artemio Panganiban noted that the current party-list system can be “manipulated” to serve the interests of a select few. He called for the urgent revision of the law.

Clearly, the most urgent need of the hour is for legislation to be passed to revise the partylist act and install permanent safeguards to prevent abuses and misuses of the system.

Political science Professor Jorge Villamor Tigno of the University of the Philippines Diliman observed that the inadequacies and conflicting features of the party-list system law can be traced back to its key designer—Congress—whose members may have looked upon the party-list organisations either as potential competitors or useful platforms in their quest to retain their positions of power and privilege. Either way, the lasting effect of the party-list system can be regarded as one that undermines (rather than reinforces) the legacy of People Power.

In the coming 2022 party-list elections, party-lists of the marginalized sectors face formidable challenges. On October 8, the last day of filing of Certificates of Candidacies (COC), a total of 270 party-lists filed their COCs, the overwhelming majority of which are controlled by political dynasties.

Furthermore, the government propaganda network has shifted focus from attacking “drug addicts” to activists, many of whom are party-list members. Online information operations against activists and progressive groups take off from the Rodrigo Duterte government's drug war playbook—attack online, then kill.

Bayan Muna Iloilo city coordinator Jory Porquia was gunned down by suspected state agents on April 30, 2020, amid the COVID-19 pandemic.

On August 10, 2020, activist land rights defender and Anakpawis Party-list chairman Randall “Randy” Echanis, 72, was killed inside his home in Quezon City. His body bore multiple stab and gunshot wounds. Echanis had been active in opposing a new anti-terrorism bill, which the President signed into law in July 2020.

Human rights activist Zara Alvarez was shot and killed by unidentified gunmen in Bacolod City on August 17, 2020. She had been receiving death threats for more than a year. Alvarez was a  former campaign and education director and paralegal in Negros for the human rights group Karapatan. Amid the pandemic, she had been coordinating and conducting relief operations as part of a community health programme. She was the 13th member of Karapatan to be murdered since Rodrigo Duterte came to power in 2016. Other Negros Island-based activists reportedly received threatening messages through their social media accounts saying, “You’re next.”

The government has even moved to disqualify activists from joining the party-list race by branding them as legal fronts of the communist movement. Against forbidding odds, genuine party-lists of the marginalized sectors have to rely on effective campaign strategy, their organized mass base and support of opposition allies to overcome and neutralize the formidable advantages of the party-lists of political dynasties in the coming 2022 elections.

On September 27, the Fifth National Convention of the progressive Makabayan Coalition elected a mixture of seasoned legislators and first-time congressional candidates for its official slate in the 2022 election.

From the party-list groups forming the Makabayan bloc—Alliance of Concerned Teachers (ACT), Anakpawis, Bayan Muna, Gabriela, and Kabataan—six candidates for the 19th Congress are former lawmakers who held party-list posts.

The coalition has vowed to mobilize its constituency nationwide to launch a strong electoral campaign that adapts to current state-instigated terrorism and restrictions amidst the COVID-19 pandemic.