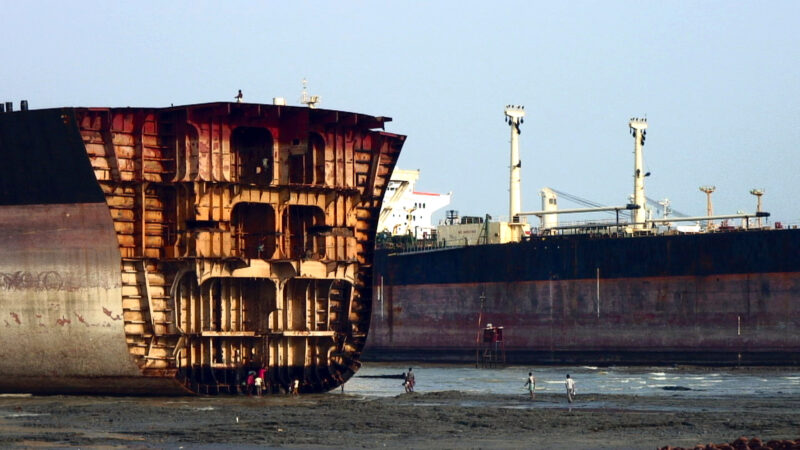 What happens when a ship dies? They are sent to hazardous graveyards in places like India, Bangladesh, China and Pakistan to be dismantled and sold as scrap. However, the process is labour intensive and lacks safety measures, making it one of the world's dangerous industries.

The environmental authorities in Bangladesh recently downgraded the status of the ship recycling industry from red to orange, meaning that ship-breakers will no longer be required to obtain an Environmental Impact Assessment (EIA) outlining the impact of the industry on soil, water, air and human health. This has drawn criticism from environmental activists.

Number one in position

Each year around 700 of the approximate 45,000 ocean-going ships in the world go out of commission and are sent to ship breaking yards. The ship breaking industry was mainly concentrated in industrialist countries until the 1960s and 1970s, but they began to move to take advantage of the cheap labour in countries like India, Pakistan and Bangladesh. In Bangladesh, most of the 150 shipbreaking yards are located near the port city of Chattogram (formerly Chittagong) on the Bay of Bengal. The industry has created employment for the poverty-stricken locals and meets a majority of the country's iron demand for both raw materials and finished products.

In the past few years, Bangladesh has secured the top position by dismantling almost half of the ships scrapped in the world and it remains on top in the first three quarters of 2021. The reason for the growth is the local demand for steel and relaxed environmental regulations. Bangladesh, like India, has almost no iron mines and depends on steel for their growing manufacturing industries.

About 50,000 people work in the shipyards in Chattogram, and the majority of the labour (over 40 percent) in this industry are between the ages of 18 and 22. Each year, dozens of workers die due to work-related accidents.

Ship breaking yard in Chittagong, Bangladesh has unusually high number of work related fatalities and injuries.
Due to extreme poverty and political situations in Chittagong hill tracts many Jummas also working in ship breaking yard and carrying out such dangerous jobs.
(Thread) pic.twitter.com/Y9stZqYbKu

The activities of ship breaking include removing all types of furniture, fittings, gears, engines, all the way to cutting down and recycling the ship's steel structures. The workforce in Bangladesh is mostly uneducated, untrained and malnourished and they do these tasks manually without protective equipment of any kind.

According to Shipbreaking Platform, an NGO focused on the perils of ship breaking, the concerns about the industry in Bangladesh include hazardous working conditions, fatal accidents, exploitation of child workers, and severe pollution of soil and water as well as the dumping of hazardous wastes.

Several studies, including this one done in 2015 by M. I. Talukder, A. N. M. Fakhruddin and M. A. Hossain confirm the presence of various types of heavy metals several times above the safe limits in the shipyard area, its adjoining agricultural lands, and the ocean. These harmful metals are entering the human body through the crops produced in the land and causing cancer and other terminal illnesses. 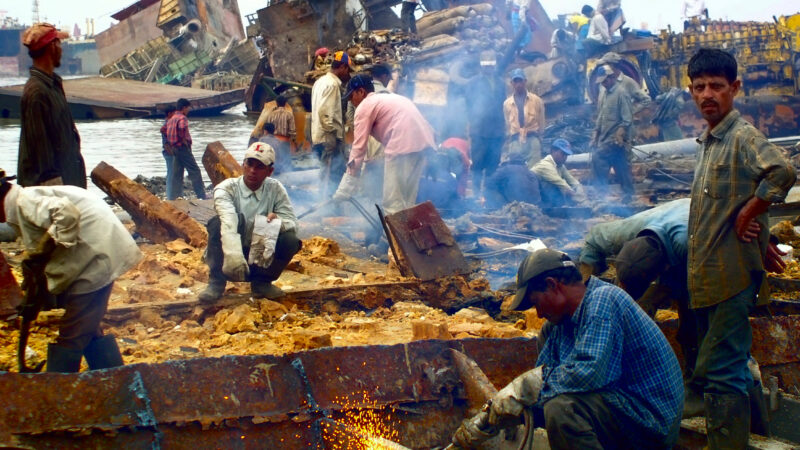 In a landmark verdict in 2009, a Bangladeshi High Court ordered the Department of Environment (DoE) to stop all ship breaking yards operating without environmental clearance following litigation by Bangladesh Environmental Lawyers Association (BELA). The court further ordered that no vessel for dismantling that is not pre-cleaned of hazardous materials be imported by Bangladeshi ship breakers.

Lax laws and pressure from the owners

There are several laws in Bangladesh related to the recycling of the ships — such as the Shipbreaking and recycle rules (2011), Bangladesh Ship Recycling Act (2018) — which stipulate several measures and requirements to address the challenges of the industry and the safety of the workers and the environment. However, most of them are not being implemented.

In April 2016, a Bangladesh High Court issued a contempt ruling against top government officials and the president of the Bangladesh Ship Breakers Association for not implementing its March 2009 directive on forming a committee for the impartial supervision of ship breaking activities and ensuring the safety of workers and protection of the environment. As per a report by online news portal Bdnews24.com in November 2016, there were only 12 applications for the Environmental Impact Assessment (EIA) submitted for the over 190 ships that arrived in that year.

According to the Environment Conservation Rules-1997, the industries categorised red have the highest obligation to comply with environmental guidelines requiring the Environmental Impact Assessment (EIA) as a prerequisite for ship breaking activities. Over the years, there has been a lot of lobbying and pleas from the entrepreneurs of the industry demanding the cancellation of the requirement of the EIA, citing delays in getting the certificate, which usually takes months. The October 10 downgrading of the status of the ship breaking industry from red to orange can be seen as giving in to this demand.

On the Daily Star Facebook page, Md Robel comments on the news:

Why are the authorities losing power day by day? Why are they held hostage by all types of owners??? Is money behind all or (there is) any other reason ……………… ??

On November 14, 2021, Bangladesh Environmental Lawyers Association served a legal notice on the authorities concerned seeking the cancellation of the status change. It remains to be seen how the authorities and the court react to this.