An impossible task: Serbia on the European path, hand in hand with Russia and China 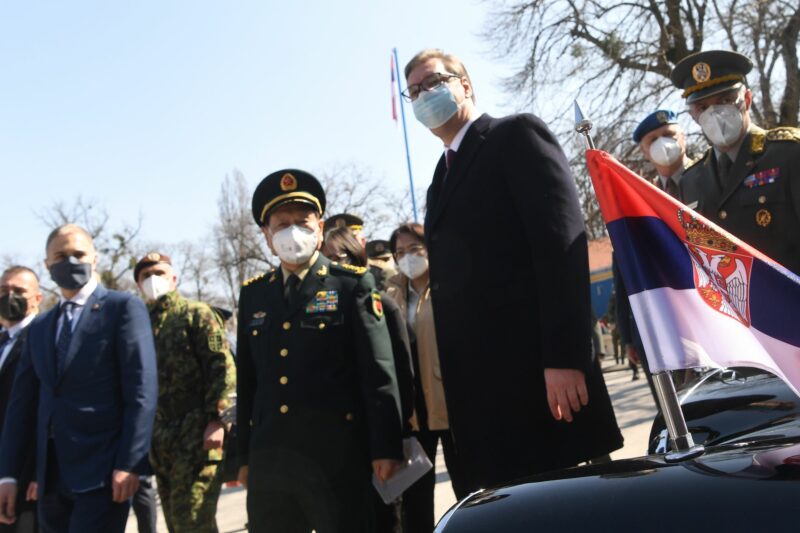 This story by Nikolija Čodanović, a journalist of Istinomer (Truth-O-Meter), a fact-checking initiative of the Center for Research, Transparency and Accountability (CRTA), originally appeared on Transitions. An edited version is published below as part of a content-sharing agreement with Global Voices.

Serbia keeps touting the country’s progress in aligning itself with EU foreign policy, but real gains won’t happen with Kosovo on the agenda.

At the beginning of September, Serbian President Aleksandar Vučić traveled to the shores of stunning Lake Bled in Slovenia to talk about the future of Europe. He was one of many leaders to appear at this year’s 16th Bled Strategic Forum and took the opportunity to complain about a lack of will in the EU for enlargement and how “the Europeans and Americans are preoccupied with China.”

Vučić confided to the media: “As soon as they move away from the cameras — and in front of the cameras, their topics are the green agenda and climate change — all that is left is China.”

But, aside from the gossip, Vučić had a chance for something more significant: to push his country’s European prospects with Charles Michel, the president of the European Council, the European Union body that brings together EU leaders to set the bloc’s political agenda. Vučić later boasted to journalists that he had told Michel that Serbia had delivered on a promise to align its foreign policy closer to the EU, while still protecting its national interests.

“What is important is that we have made our promise to raise the rate of alignment with European Union foreign policy decisions, and we have lifted it from 48.28 percent to more than 62 percent,” Vučić said, adding that “specific limitations” existed concerning “the complex binding” of Serbian interests related to Kosovo.  The  process was also “not as simple as it looks.”

Most Serbian analysts would agree with that assessment, though they would likely place the source of the complexity elsewhere. The country may, theoretically, increase its “rate of alignment” (the numbers, are, however, debatable, as indicated below) but only so much progress can be made as long as Vučić and his government put so much stock in strategic relationships with China and Russia. With both countries, the public focus is on boosting economic cooperation, especially with China, as reflected in the growth of investment in recent years.  Serbia depends on Moscow for natural gas, and some officials see potential in the free trade agreement signed in 2019 with the Russia-dominated Eurasian Economic Union. In addition, good relations with Moscow remain important to a large segment of the electorate and can be used for internal political reasons.

At the heart of the government’s goodwill toward Russia and China, however, remains Kosovo, whose independence, along with Serbia, they have refused to recognize. Belgrade clearly hopes that Beijing and Moscow will continue to have the country’s back in the UN Security Council over any resolutions concerning Kosovo.

77% of respondents in Serbia to a recent Center for Free Elections and Democracy survey thought China had a positive influence on Serbia and 72% believed the same of Russia. Only 26% thought so highly of the EU and 15% of the United States.

The first article of the Serbian Constitution sets out a European agenda for the country:

“The Republic of Serbia is a state of the Serbian people and all citizens who live in it, based on the rule of law and social justice, principles of civil democracy, human and minority rights and freedoms, and commitment to European principles and values.”

At least on paper, Serbia is taking the European path. It became a candidate for EU membership in 2012 and since then has begun negotiating 18 out of 35 accession “chapters,” but only two have been provisionally closed and no talks on further chapters have begun for almost two years.

One of the most critical unopened chapters is the one on foreign, security, and defense policy. According to the European Commission’s progress report for 2020, Serbia had achieved “some progress when parliament adopted new security and defense strategies.” However, “the alignment patterns remained largely unchanged,” and “A number of statements and pledges were made by high-level officials which went contrary to EU positions on foreign policy.”

Contrary to Vučić’s claims, the Belgrade-based International and Security Affairs Center (ISAC) recorded a minor drop in the percentage of Serbia’s foreign policy positions that followed the EU line, putting the total percentage in 2020 at 56 percent. ISAC said the lowest alignment rate in Serbia so far was 47 percent in 2017, while the highest rate stood at 66 percent in 2015.

One of the authors of the analysis, Igor Novaković, said the study demonstrated that Serbia’s position mainly contrasted with the EU when it came to EU policies related to Russia and China. He assumes that Serbia’s positions were payback for the support these countries showed in the Security Council regarding the question of Kosovo.

“If there are fewer [EU policy] statements related to Russia and China then the number of statements we support, meaning the alignment rate, increases,” Novaković said. For example, he recalled that in 2012 and 2013, the alignment was over 90 percent, but, back then, almost no EU statements had referred to Russia and China. “This explains everything,” he added, saying that just quoting percentages without analyzing which issues are conflict points reveals little.

Vladimir Međak, a former assistant director of the Serbian government’s Office for European Integration, agrees that alignment percentages are not what matters. Međak is now vice president of the European Movement in Serbia, an NGO advocating for the country’s full European integration.

“Numbers are completely irrelevant if you go to Washington and sign an agreement on relocating the embassy to Jerusalem and appoint an ambassador to Damascus, absolutely contrary to EU foreign policy positions,” Međak said, adding that Serbia “is far beyond the point where a percentage can impress anyone.” He doubts that anything can be done to improve the country’s adherence to EU foreign policy positions since so much relates to Kosovo.

Adopting an “independent” foreign policy, as the government describes it, is “the equivalent of ‘not aligned with the foreign policy of the European Union,’ ” Međak said. “What has Serbia gained by opening an embassy in Syria, as it has only created a problem with the EU?”

According to Međak, Serbia might be mouthing agreement with EU foreign policy, but the reality is elsewhere.

“We have introduced sanctions against [Belarusian President Alyaksandr] Lukashenka and supported the European Union’s reprimand of Lukashenka, and then apologized to him. That’s clearly saying, ‘We had to do that because of the EU, but we don’t really believe it.’ ”

If Serbia talks about European values and acts completely the opposite, it is only a matter of time until someone will ask if Serbia is at all compatible with the EU, he said.

“Are our values more compatible with Lukashenka and [Turkish President] Recep Tayyip Erdoğan or the European Union?” Međak asks. “The decision on our accession to the European Union will be adopted by countries that seriously uphold human rights.”

ISAC’s Novaković also pointed out the significance of alignment for those deliberating about Serbia’s future. “By aligning, we are demonstrating that one day we will be willing to act within the political framework of the European Union and that we will also be taking account of the interests of the European Union member states,” he said.

If that does not end up happening, all will not be lost, some of Vučić’s closest collaborators believe. Current Interior Minister Aleksandar Vulin, back when he was defense minister, once said that Serbia would not beg to join Europe if Europe didn’t want Serbia.

“We don’t have to be a member of anything, but we have to preserve our dignity and see what our political and economic interests are,” Vulin said. “Europe doesn’t want us? We will find a way to be wanted by other big and powerful countries.”