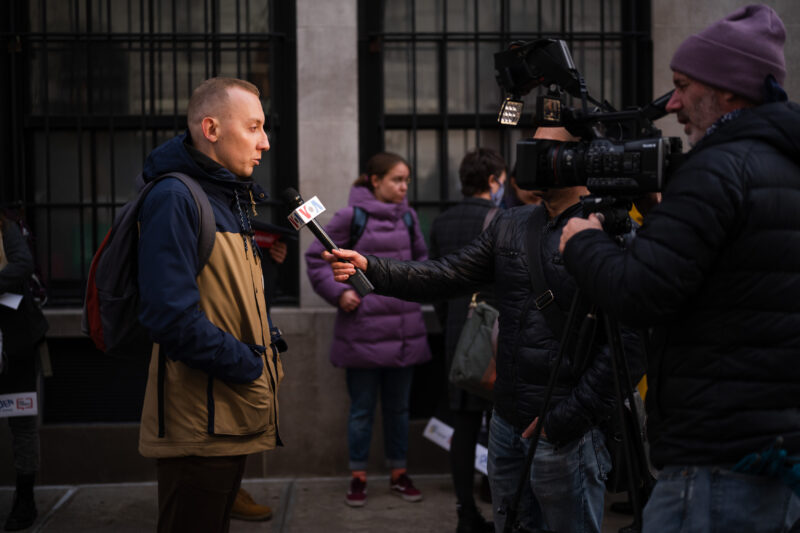 On November 15, human rights and free speech activists held a street action outside the Russian Federation Consulate in New York City to mark the Day of the Imprisoned Writer.

This particular rally was held in support of Ukrainian writers and journalists imprisoned for their writing or speech in the occupied territories of Eastern Ukraine and Crimea.

The Empty Chair Day action was organized by PEN America, a longstanding free speech and writers’ rights non-profit, in partnership with the Media Initiative for Human Rights, Razom for Ukraine, PEN Ukraine, and the Ukrainian Helsinki Human Rights Union.

The Empty Chair Day is a long-standing PEN tradition. The empty chair symbolizes and honors a writer who cannot be present because they have been imprisoned, detained, disappeared, threatened, or killed.

The focus of this year’s Empty Chair action is Vladyslav Yesypenko, a Radio Free Europe/Radio Liberty journalist who was detained in March 2021 and illegally imprisoned on espionage charges for reporting on the realities of life in Russia-occupied Crimea. Yesypenko has reportedly endured torture at the hands of Russian federal security services and Crimean law enforcement.

Dozens of other independent journalists, writers and creatives working in Crimea and occupied eastern Ukraine have faced similar pressures, with some imprisoned and many pushed out into exile.

This year’s Empty Chair Day was especially poignant, PEN America's Couch said, as Stanislav Aseyev, an award-winning Ukrainian journalist held hostage for his reporting on Eastern Ukraine, featured as one of the speakers at the street action.

Stanislav Aseyev […] was the focus of the Empty Chair Day in 2019. He was illegally detained and tortured for his reporting on Donbas. International pressure, including PEN America’s dedicated campaign, helped secure his release. Having him with us sent a powerful message that the world has not forgotten Donbas.

Aseyev, along with other activists and supporters, joined the action to show solidarity with journalists who remain illegally detained and imprisoned for their work in occupied Eastern Ukraine and Crimea.

A big thank you to everyone who joined us in front of the Russian Consulate in NYC for the Day of the #ImprisonedWriter. We were honored to have Stanislav Aseyev present at the gathering of readers and writers calling for the release of Ukrainian journalist #VladyslavYesypenko. pic.twitter.com/iHK30FSuuN

Aseyev, who was born in Donetsk, Eastern Ukraine, worked as a journalist there during the outbreak of the Russian-supported military conflict in the Donbas region of Ukraine, encompassing the Donetsk and Luhansk oblasts. Under the pen name Stanislav Vasin, he wrote short reports for Ukrainian media throughout 2015-2017 about the situation on the ground in occupied Eastern Ukraine. 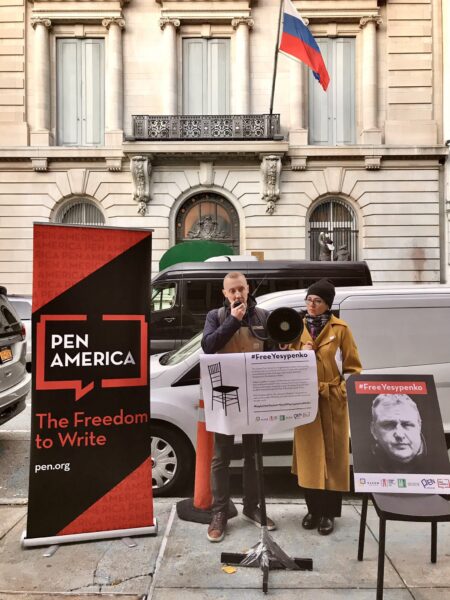 In June 2017, Aseyev was arrested and unlawfully imprisoned by separatist militia forces for “extremism” and “spying.” Aseyev was held captive in Izolyatsya, a former insulation plant turned public art space in Donetsk, and subjected to mistreatment and torture for over two and a half years. Multiple freedom of expression groups had called for his release as part of the #FreeAseyev campaign. On December 29, 2019, he was released as part of a prison exchange and handed over to Ukrainian authorities.

“In Isolation”, a collection of Aseyev's dispatches from occupied Donbas, was published in Ukraine while he was still held prisoner. An English-language translation is slated to be released in the spring of 2022 by Harvard University Press.

Aseyev's latest book, “The Torture Camp on Paradise Street,” published in Ukrainian in 2020, was also translated into English in 2021. The memoir recounts his imprisonment and exposes the brutal underground prison system run by the Russia-supported separatist authorities in the unrecognized Donetsk People's Republic.

Since his release, Aseyev has campaigned internationally on behalf of other Ukrainian journalists and writers unjustly imprisoned by pro-Russian forces in occupied Donbas and Crimea.

Other media rights groups, along with the international Media Freedom Coalition, have been calling for the release of all media workers imprisoned in occupied Ukrainian territories, condemning Russia’s and pro-Russian authorities’ efforts to stifle independent print and broadcast media activity.

Read an excerpt from Stanislav Aseyev's book, “The Torture Camp on Paradise Street,” in the LA Review of Books.