Open city planning could solve tensions between old and new 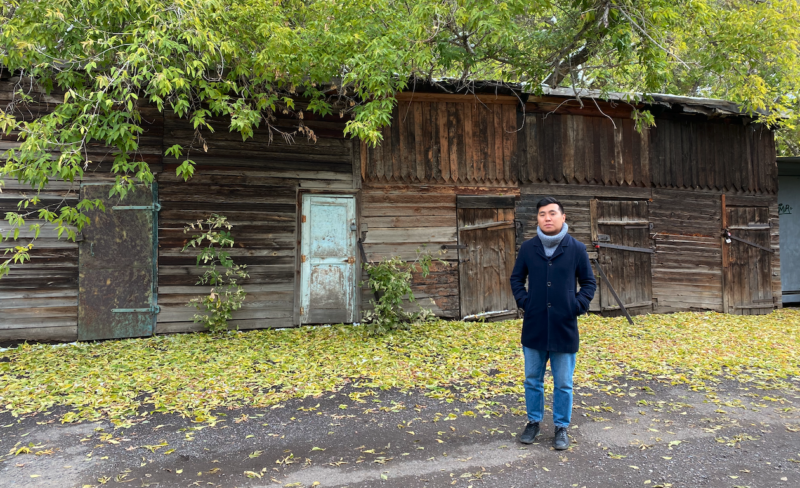 Temirtas Iskakov, of Fading.TSE, standing next to the old wood storage of the residence of the managers for the railroad enterprise, which built massive infrastructure projects during the war effort in the 1940s. Photo by Paolo Sorbello, used with permission.

Kazakhstan's capital was renamed from Astana (Kazakh for ‘capital’) to Nur-Sultan the day after long-time President Nursultan Nazarbayev resigned on March 19, 2019. Until it became the capital in 1997, the city was known by its original name of Akmola, although for 30 years between 1961 and 1991 it was renamed Tselinograd. With four names in three decades, the city's identity has been construed through the tension between ‘the old’ and ‘the new.’

With the transfer of the seat of the government came significant investment and changes in the urban landscape. The old village became known as the Right Bank, on the northern side of the Ishim river. Most of the new urban developments, including music halls, a tent-shaped mall, and several skyscrapers, mushroomed on the left bank since 1997. 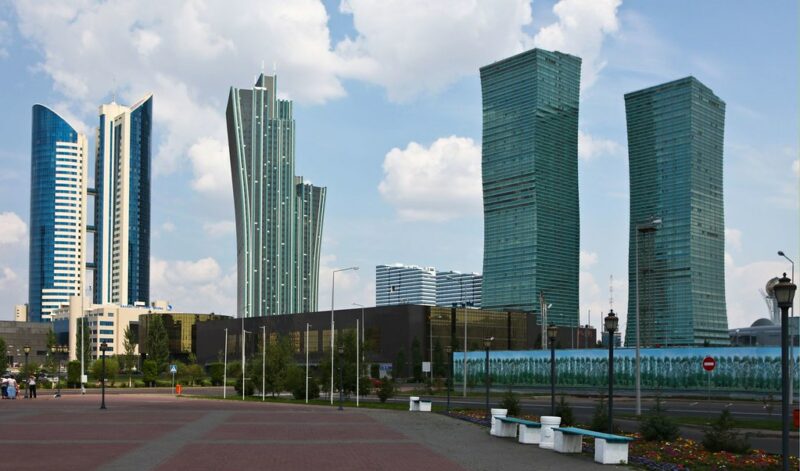 Some of the tallest buildings in Nur-Sultan. Credit: “IMG_9113 Astana” by Ninara, licensed under CC BY 2.0

Against this glitzy backdrop, the Right Bank, the ‘real’ Astana or the old Tselinograd, runs the risk of fading away from the memory of local residents. Activists, however, argue that there are treasures to preserve, historical buildings to maintain, and a collective memory to respect.

Global Voices spoke to Temirtas Iskakov, the founder of the Instagram page Fading.TSE, which aims to highlight the most interesting hidden gems and link individual stories to the architectural environment and the history of the country.

Global Voices (GV): How did you come to experience this city since you moved here?

Temirtas Iskakov (TI): This is the city of the people that, one way or another, move here. I was born in 1991 in Omsk, Russia — my parents moved to Kazakhstan at the beginning of the 2000s, so I finished school here and stayed. As a kid, I was living in Ekibastuz and was watching daily updates on state TV about the growth of the new capital.

While studying architecture, I lived abroad in Krakow, Poland, where I could see first-hand how a city government deals with heritage. Plus, after seeing the practice of walking tours there, I thought this could be replicated here, because we have a wealth of history to showcase. There are pearls in each of Kazakhstan’s cities and we need to put them on display.

Moving the capital here was a fresh injection of capital and was beneficial for the locals. The whole nation was sent to live in this city, so they all learned to live and survive together.

I’ve seen a lot of changes in the past 12 years. They happen progressively, but inexorably.

We shouldn’t be in a rush to tear down the old and build the new. It’s not necessarily always about some great architecture or epic story. Sometimes it's about individual stories, which make up the history of the whole country.

GV: How did your Fading.TSE project start?

TI: After moving here, I heard people saying that Astana has no soul and no history, which intrigued me to find it. As photo blogs on Instagram became popular, I found a way to become a bridge between the voices of the locals, who have a good grasp of the city's soul and history, and the academic knowledge on architecture and conservation. Instead of keeping well-researched books and articles in the back of university libraries, only accessible to very few people, this project aims to tell stories that bring the study of the city closer to those who live here and those who carry out research projects alike.

My project received attention from the media, also traditional and state-owned media. The public reacts well, especially during our walking tours. We had funding from Soros Foundation Kazakhstan two years ago, which helped kick start the project and sustain our small team. Now we are doing more public lectures, walking tours, and other specific projects.

The buildings are not just buildings, those four walls hold amazing, inspiring, and terrible stories, and we need to see the whole picture to appreciate our own history.  There are lots of layers of city history, especially from the times when it became the capital. People are proud to have been part of the construction of the new capital.

Now our project has a good mix of supporters, it’s not only locals or people who have lived here all their life. Some of the ones who have arrived here find parallels with their own experiences in their hometowns. Young and old people take part and voice several different preferences and perspectives.

GV: Yet there are different interpretations of the “originality” of the Right Bank, compared to the Left Bank. What is your position?

TI: The history of the Left Bank is shiny and “in your face.” It is documented and researched about, especially by Western academia. My message isn’t one of demonization of the newer Left Bank, quite the opposite. You cannot hate half of your body. However, there are many tourists and first time visitors who have never been to the Right Bank. It should really all be one cultural environment.

In 2019, the city administration spent 600 million tenge to redo the facade of the Triumphal Arch on the Left Bank, which had crumbled just eight years after construction. And now the problem has resurfaced again. You cannot stop development, but you can avoid using bad construction materials and help match architectural styles.

GV: What are then the channels to fight for preservation?

TI: You can fight for every single object to be included in the list of Buildings of State Significance, but you’d end up using all your time on single projects, rather than tackling the nation-wide, global issues affecting Kazakhstan’s urban landscape. Plus, even buildings that are in the list are not as well protected.

The former Merchant House [photo below], a historical building that at one point hosted the Embassy of Belarus, was turned into a karaoke hall in 2020.

The Ministry of Foreign Affairs, which owns the building, decided to rent it to a karaoke owner. Its cadastral function was therefore changed from “institutional” to “cafe,” which goes against the law on the preservation of heritage. 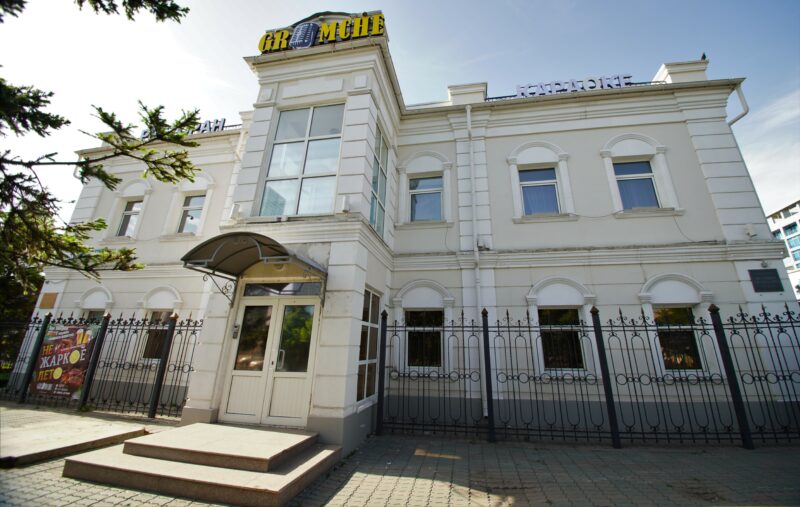 The Merchant House was built in the late 19th century and was owned by Ivan Silin, a trader. The building has since hosted the headquarters of the Red Guard, a library, a philarmonic orchestra, an administrative building, and the Embassy of Belarus. Now, it is a karaoke locale. Photo credit: Yakov Fedorov (Wikimedia Commons – CC BY-SA 4.0).

GV: So the solution is more systemic?

TI: It’s almost impossible for activists and experts to take part in the discussions about urban planning. The number one priority should be to make the planning of Kazakhstan’s cities open to society.

There are several urban activism initiatives who signed an open letter to the government to establish a platform for open planning. Heritage is a public issue and should be discussed publicly.

Our work had an impact. The city administration has showed interest in our project, and it has consulted with us on certain issues. I cannot say that the end results are perfect, though, also because the coordination between us, the civil society, and them, the administration, is still tied to personal relationships with public officials. Institutional memory gets lost every time there is personnel change and the turnover in the urban planning department is high. In this context, it becomes hard to plan far ahead and there is a risk of repeating mistakes.