A memoir of escaping Turkmenistan in search of education

Pursuing a university degree abroad is tough for Turkmen girls 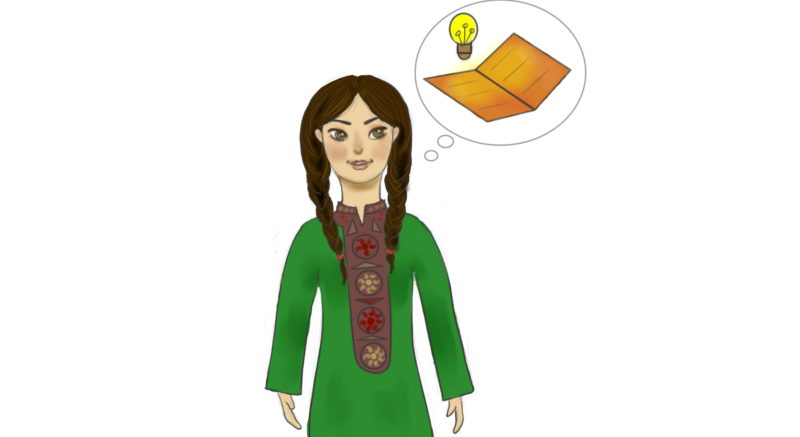 Not everyone can appreciate the virtue of unbiased, unprejudiced, and progressive education. Having the freedom to reason and speak one's own mind can be fascinating, confusing, and contradictory if you grew up in Turkmenistan. The deterioration of the country’s education system dates back to the early 1990s when then-president Saparmurat Niyazov decreed that all Soviet books be destroyed, in an effort to control the circulation of printed material. Since then, schools in Turkmenistan suffered from textbook scarcity.

I graduated from high school in Turkmenistan more than a decade ago, and I still vividly remember that only three or four sets of textbooks were available for 30 or more students in each classroom. Lessons were structured around note-taking from books and memorization—no analysis at all.

In 2001, Niyazov decided that our struggles could be made worse and compressed 10 years of schooling into nine. As a result, the hours allocated to school subjects were reduced, and many subjects such as physical education, statistics, and economics were permanently eliminated from the curriculum. Although my classmates and I were struggling, the authorities mandated that teachers give a passing grade to everyone, in order to demonstrate school progress. Secondary schools became “diploma factories.”

Despite the hardship, I was still hungry for knowledge. I used the opportunities provided by foreign embassies to learn English free of charge and borrow books from the library. Some of us took extra lessons on history, math, world cultures, English grammar and conversation, from foreign teachers who shared their knowledge with Turkmen youth. It was this experience that inspired me to continue my education.

Yet, the road to a university degree was not one without obstacles. Financial, cultural, and political hurdles hindered my pursuit of higher education. Education, although free of charge, is still out of reach for the majority of working-class citizens. To get into a university in Turkmenistan, a bribe to school officials is customary. Corruption and dreadful reforms in the education system have dramatically changed the nature and purpose of education in Turkmenistan. Today, the majority of Turkmen citizens see education merely as a means of achieving a diploma and qualifying for better-paying jobs.

A struggle through transition

My parents lost their Soviet-era jobs after independence because the associate degrees they had earned were no longer enough in the new job market. Despite their bitter experience, they still valued education, and sometimes sacrificed the quality of our food and clothing in order to pay for my English language courses.

My mother relentlessly told us that we had to study to avoid the financial hardships they had gone through. Her advice became deeply ingrained in my mind.

Facing bleak opportunities to gain education in my home country, I looked for sponsorships to study abroad. Foreign embassies had support systems, such as grants and tuition waivers for talented Turkmen students. I wept when I received the call: I would be fully funded to pursue a Bachelor’s degree at a university abroad with a U.S. curriculum. These were the tears of delirious happiness.

My father's approval was the last hurdle to overcome. In Turkmenistan, the custom is, “Ogul düzde, gyz öýde” (“The field is a place for boys, the house for girls”). I needed the help of the whole village to convince my father. When he gave in, I thought my life could finally take a new turn.

When it was time to leave, the members of my extended family gathered at the airport to bid their farewells. After all, I was the first girl in my family to ever leave the country. I could not hide my excitement among my loved ones’ worries. After an endless round of hugs, I happily marched towards passport control. I could see a bright future awaiting me, or so I thought.

After carefully examining my passport and student visa, an immigration officer told me in cold blood that I was not allowed to leave the country. He would not accept my questions; instead, he grabbed my arm and evicted me from the passport control area. I was bewildered. Only later, I learned from the Embassy that the Turkmen government had unilaterally banned students from leaving the country to study at selected foreign universities.

Months trudged by, what I expected to be my first semester was already underway, but I was stuck in Turkmenistan. “Why do they fight us?” was the question I kept asking myself for six months.

During this time, I was routinely “interviewed” by officers from the Committee of State Security (formerly known as the KGB). Other students who shared my fate also had to go through what were in fact hours-long interrogations. The State Security questions led me to believe that the government had grown suspicious about the purpose of the scholarships and decided to blacklist us. Maybe the KGB officers speculated that foreign embassies and universities were preparing future dissidents, who would challenge the regime. Blacklisting has been a common KGB tactic for decades to control society and spread fear. These tactics cultivated anxiety and fear, and caused chronic depression, with which I still struggle.

The more I suffered pressure and coercion, censorship and repression, the more I recalled the verses from 1960s feminist dissident Annasoltan Kekilova’s poem: “Dönmerin öz pikrimden/Atsalarda ýanaryn oda … ” (“I won’t give up on my thoughts, and if they throw me into the fire, I shall burn”). I used her stanzas as a mantra to hold on to my dreams while living under prolonged, cruel, oppressive, and totalitarian rule. Mentally, I was ready to go to prison, metaphorically throwing myself into the fire, rather than giving up on my hope for an education.

Months of diplomatic negotiations finally helped lift the ban on some of the students, shortening the blacklist. I managed to leave the country and realize my biggest dream of education and even obtained a Master's degree. Yet, these events left deep scars on my mental health and soul, which remain unhealed even after more than a decade. I am still haunted by the horrors I suffered, in my nightmares, and in reality, each time I have to pass through customs control around the world.

Since early 2020, Turkmen authorities have used the pretext of the COVID-19 pandemic to ban its citizens from flying abroad. As I read alarming news about schools being closed either due to the pandemic – although the government still affirms the country has not been affected – or the environmental crisis so-called “Dust-19,” my heart bleeds for young people, especially young girls, whose schooling within the country is usually sacrificed in favor of their brothers’ education. After all, girls can be married off while boys have to be the breadwinners, as per Turkmen custom. In fact, at times of ongoing economic crisis, families opt for child marriage as a way to relieve economic hardship. The early marriage of daughters is a centuries-old custom used to ensure financial security for both the bride and her family. Under such conditions, Turkmen girls will be increasingly excluded from the already shrinking space for higher education.

That is unless the international community speaks up and starts pressuring the Turkmen government to resume flights and allow easier international exchanges.

My hope is that the remarks of U.S. Vice President Kamala Harris during the United Nations Commission on the Status of Women on March 16 this year, when she said that “the status of women is the status of democracy” will translate into a renewed international commitment to gender equality, human rights and democratic transition initiatives in Turkmenistan.