Every monsoon, children drown by the dozens in sand pits 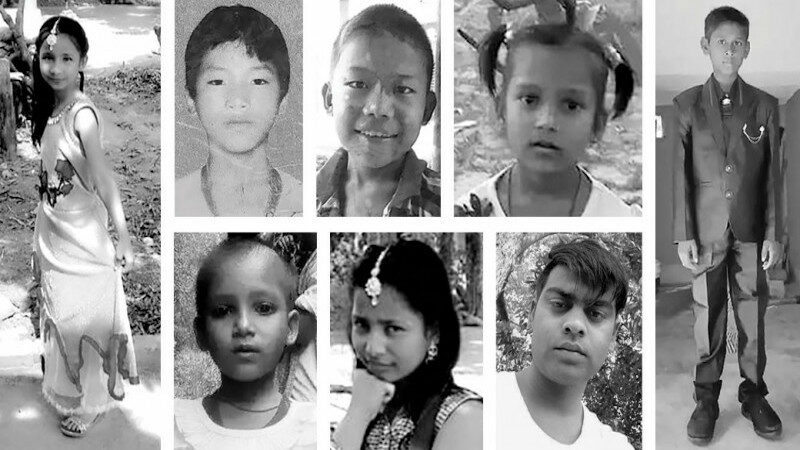 This article was originally written by Mukesh Pokhrel in Nepalese in Himal Khabar and a translation by Aryan Sitaula was published in the Nepali Times. An edited version is republished by Global Voices as part of a content sharing agreement.

Despite protests, defiant sand mining and quarry contractors have continued to leave large abandoned pits along Nepal’s rivers in which children drown by the dozens every year. There is no exact count of how many children lose their lives every monsoon in the pits and ditches left by sand mining contractors because police only record these deaths as generalised “deaths by drowning.”

Sand mining is rampant in Nepal, and illegal and uncontrolled excavations of riverbeds and low streams are taking lives, besides causing environmental hazards. In Dhanusa district alone, 206 children have drowned in the past two years — most of them were under 15 years of age, and they died while swimming in these water-filled sand mining pits. 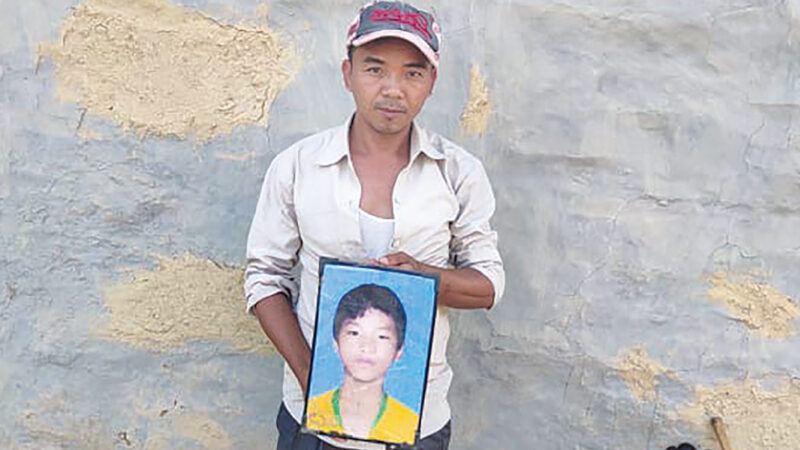 Twelve-year-old Sushil Layomagar of Birendra Bazar could not return to school after the holidays in July 2019 because of the heavy rains. He was sent out in the afternoon to graze goats, but fell into a 50-metre-deep pit dug by a sand mining contractor, and drowned, together with a friend. Sushil's death was a doubly severe blow to his mother, Chhalimaya, whose husband Hari Bahadur had died in Saudi Arabia earlier that year.

The pit was the result of a contractor extracting sand and gravel to build the Bharatpur-Srirampur road, leaving the gaping hole that filled with water after the rains. There was a strong protest against the contractor. “We told them to stop digging, the children will fall into the ditch,” says Susil’s grandmother Madhumaya Layomagar. “But they shouted at us, saying that they owned the land and could do with it as they pleased.”

That same year, in the adjoining Sarlahi district, Samma Khatun, 6, and Jasmine Khatun, 11, of Sarlahi drowned in a pit dug for a brick kiln. The two girls left home to play at noon, but when they did not return for two hours their parents started a frantic search. 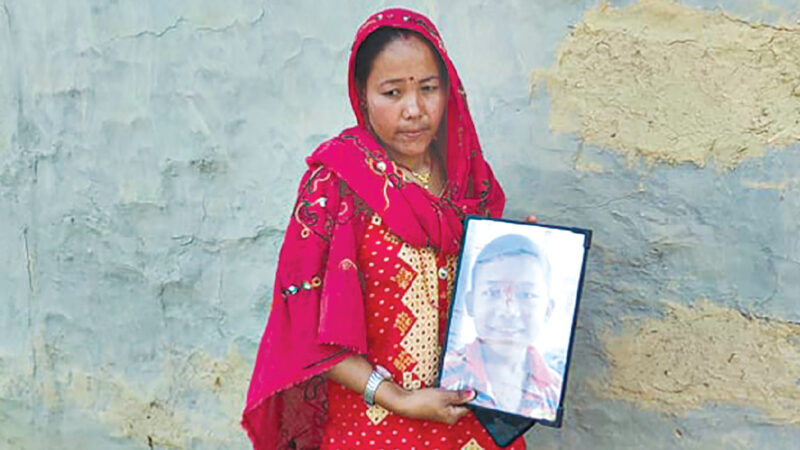 Ommaya Layomagar with a picture of her son Aditya who had drowned together with Sushil Layomagar. Photo: Mukesh Pokhrel/HimalKhabar via Nepali Times. Used with permission.

It is not just in the Tarai region that children are drowning in abandoned sand pits. In Nuwakot, 12-year-old Binita Balami fell into a ditch left by illegal sand miners. Laxmi Tamang, 35, jumped into the pond to save her but also drowned. Last year, a 12-year-old boy drowned in similar circumstances in Nuwakot district’s Likhu River.

There have been many localised protests against contractors and calls for a ban on their activities, but both licensed and illegal businesses have local political patronage and have continued unabated. The rampant sand mining does not just pose a danger to children drowning, but also threatens bridges and other infrastructure.

Residents of Naktjij in Dhanusa have repeatedly complained to the municipality office against illegal gravel extraction along the Aurahi River, which has led to many deaths of children. Yet the practice continues.

It was after protests against illegal sand mining on Aurahi River that Dilip Mahato was beaten and then run over by a tipper truck near his home in Sripur in January 2020. Mahato was a college student in India, and had been outraged by the dangerous pits that the contractors left near his home. 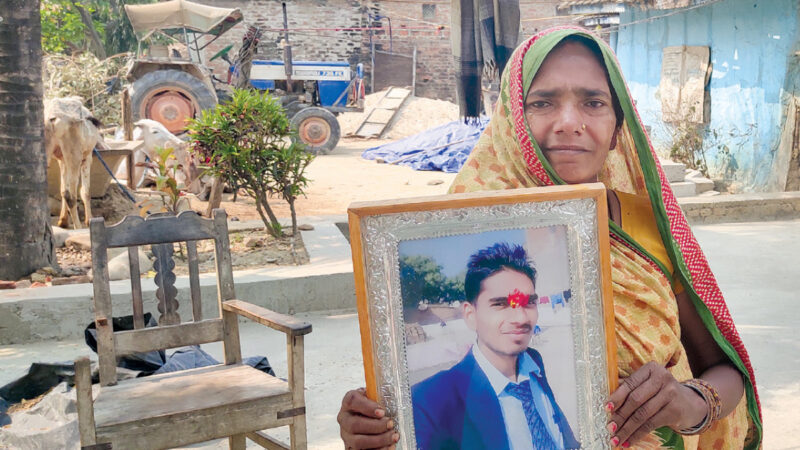 Chandrakala Devi Mahato with a picture of her son Dilip Mahato who was murdered for his activism against illegal sand mining. Photo: Mukesh Pokhrel/HimalKhabar via Nepali Times. Used with permission.

Following his murder, locals formed a struggle committee and waged a losing battle against the contractors. Dilip’s father, Ramjivan Mahato, says the police sided with the owners of the Churiyamai Sand Processing Centre.

The government’s rule on sand excavation prohibits sand and gravel mining within 2 kilometres of towns, and along rivers within a 1-kilometre radius of highways and bridges. The regulation requires contractors to level out ditches after mining so they do not collect water. The rules are blatantly ignored.

Neither the national nor provincial governments have any data on how much sand, gravel and boulders are extracted from Nepal’s rivers and streams every year, but the Chure Tarai Madhes Conservation Committee estimates that more than 30 million cubic metres of riverine resources are collected annually nationwide.

The municipalities generally set a minimum price of NPR 211 per cubic metre for the sand and gravel when inviting bids, which means the revenue for 30 million cubic metres should be NPR 6.33 billion. But, according to the National Natural Resources and Finance Commission, the government collected only NPR 4.62 billion in revenue from sand and gravel contractors in the current fiscal year despite one-third of municipalities across the country having signed contracts for excavation. It is clear that most of the mining is illegal, or is licensed in exchange for kickbacks.

Only 20 out of 100 municipalities along the Chure Range that are extracting sand and gravel actually had licenses, according to Prem Nath Poudel, a geologist at the committee. He adds, “There has been far more excavation than we have allowed. Even within the 20 municipalities that have the approval.” 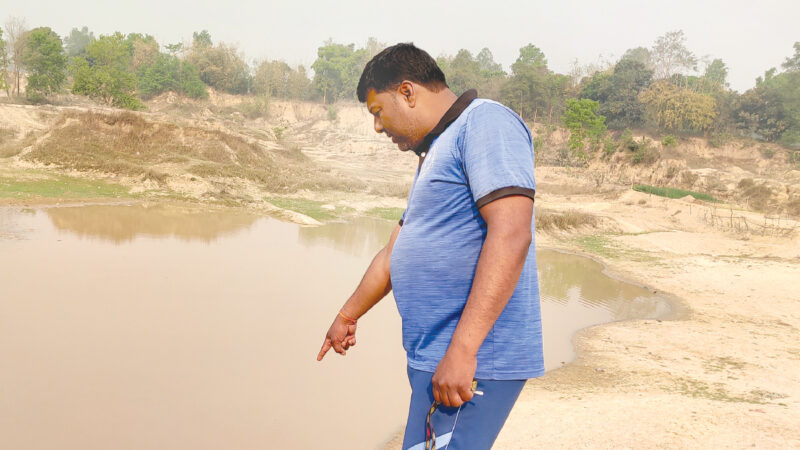 The business is being driven by a surge in construction across the country, which has raised the demand for building material. The trade is so lucrative that leader of political parties, the local administration and police officials are all in on it.

Dev Prakash Tripathi is a journalist who, after seeing rampant illegal sand mining in his native Malekhu, has become an activist with the Save Trishuli Campaign in Dhading district. He says, “Leaders and people’s representatives of all political parties have invested in the sand and gravel trade, which means their businesses are above the law.”

This angers families like the Layomagars and Khatuns, who have lost their children to drowning on sand pits, and infuriates Ramjivan Mahato, whose activist son was killed by lawless contractors in cahoots with local politicians.

In Dhanusa, the excavators and tipper trucks of the Churiyamai Sand Processing Centre are back on the banks of the Aurahi River, digging up sand and gravel. The company is still threatening the Mahato family. Says Ramjivan: “They say we already killed one of your children, don’t make us kill another one.”