Democratization in South Korea and the legacy of the Gwangju Uprising

A look into South Korea's democratic transition and political history 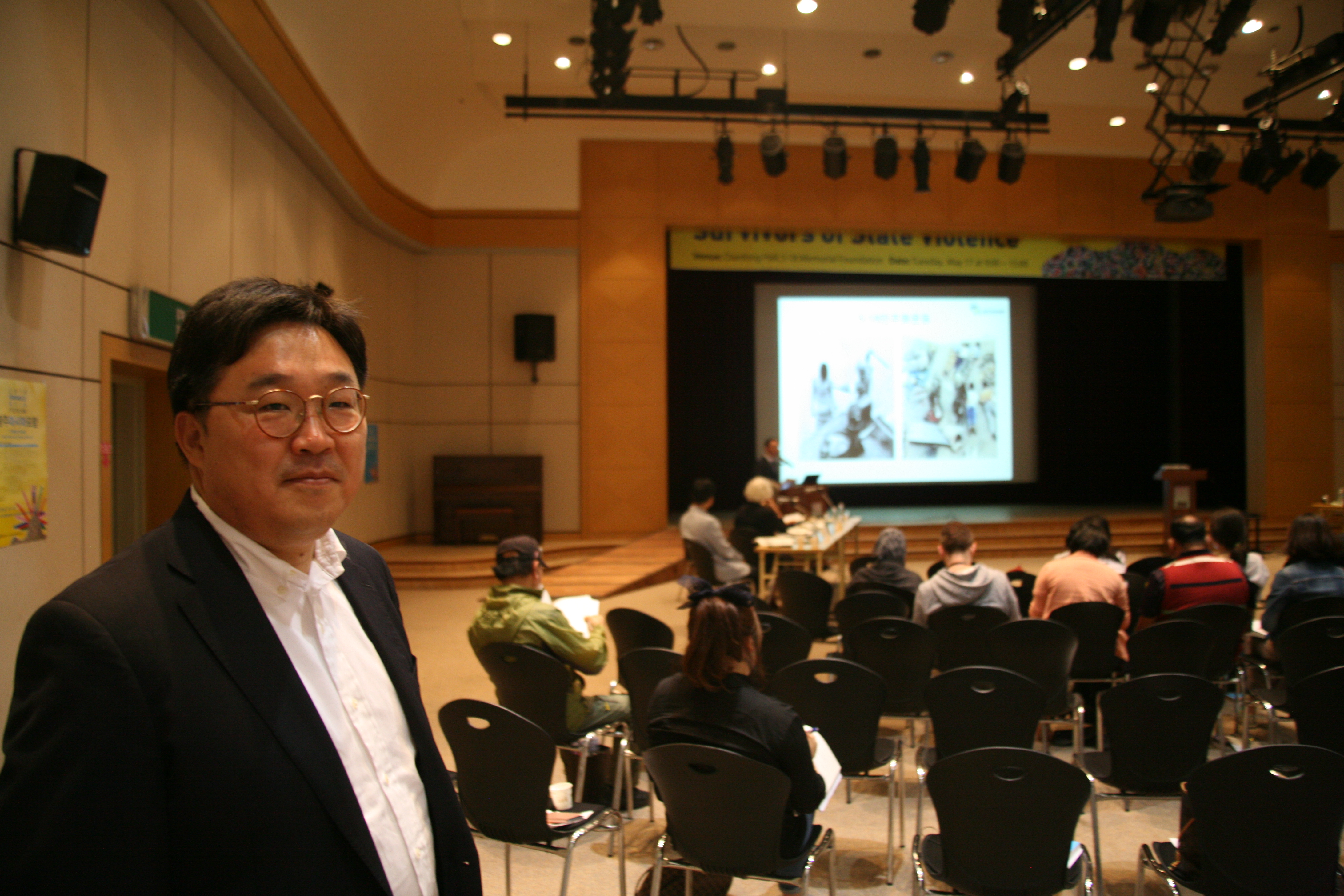 Chan-ho Kim at the fourth International Conference on State Violence and Trauma in 2016, held by Gwangju Trauma Center. Used with permission.

South Korea is known globally for its creative enterprises, high-end tech brands, automobiles, and of course, the Hallyu Wave — the Korean culture phenomenon that encapsulates digital content, music, silver screen programs, and language. But less are familiar with South Korea's impressive legacy as a democratic nation.

Established in 2001,  the KDF's goal is to enhance Korean democracy through the preservation of the country's history of democratic transition, education, and international exchanges. One of its projects is the Seoul Democracy Forum, held in May 2021, and this year's theme was the roles of youth and women in international cooperation for democracy.

GV: Hello Chanho Kim! Can you please introduce yourself to our readers?

CHK: My name is Chan-ho Kim, I am the acting Director of International Relations at the Korean Democracy Forum. Prior to KDF, I worked for the May 18 Memorial Foundation for about 20 years. My main responsibility is to promote the May 18th Democracy Movement and develop networks and alliance with Asian civil society activists and human rights defenders in national and international events.

I became interested in social movements since I was a highschool student in 1988 when a pro-democracy movement took place in South Korea.

After graduating high school, I moved out of Seoul and attended Gwangju University in Gwangju (Hangul: 광주시). It’s not a prestigious university but the city itself was known as the center of a known pro-democracy movement known as  the Gwangju Uprising in 1980.

After completing the mandatory military inscription, I embarked abroad.  I went to Norway as an exchange student for a program called the International Culture Youth Exchange to learn Norwegian language and culture at the Folk School. Norway has a huge impact to me and my later life as my experience in the country had broadened my views on democracy and human rights.

The city of Gwangju was the center of South Korea's democratization movements in the 1980s. On May 18, 1980, a string of street protests occurred in the city and the military government deployed troops who killed at least 196 people. For many years, the events were heavily censored. Although the uprising was barely mentioned in global historical textbooks, the Gwangju Uprising inspired resistance movements overseas against authoritarian regimes in various parts of Asia, including Hong Kong.

GV: Can you tell us more about your personal experience related to Korea's democratization?

CHK: I grew up in Seoul, which is about 166 miles away from Gwangju. I attended Gwangju University in 1980s. The government had strict anti-communist policies, at the time, the majority population preferred not to doubt or question, including myself. The (popular) struggle against the government violent repressions were not intense at the beginning.

Things started on the streets, and later on spread in the form of pamphlets and tracts. Neighbors in big cities, including Seoul, began to whisper as we received anonymous tracts in our mailboxes with pictures of May 18th Democracy Movement. It was a complicated and bloody process (for the nation), but eventually it ended authoritarian military regime South Korea and we transitioned into a democratic state. During the regime, state violence was on plain sights and such history shouldn’t be repeated in the future.

I consider studying in Gwangju as part of my destiny as it path my way to the May 18th Memorial Foundation, where I learned how May 18th demonstrators lived difficult lives as survivors of extreme state violence. I had the opportunity to listen to the stories of those survivors. Many students, workers and democratization movement activists were illegally arrested and tortured during my university years.

The May 18th Uprising was a cornerstone for civilians to set themselves free from being subjugated to political power. Since then, the struggle continues by commemorating the truth about the Democratic Uprising that began since 1980. Thanks to this pivot in South Korean history, this collective history that we went through, South Korea now has the direct presidential election system.

GV: Last year, a commentary published on Foreign Policy said that South Korea's success in handling the COVID-19 pandemic has been undermined by politics and religious conservatism. Does the global pandemic impact the practice of democracy and human rights in South Korea?

CHK: The COVID-19 pandemic does curtail freedom of movements, just like what has happened in other countries. The global pandemic impacted South Koreans economically and socially. For example, foreign migrant workers are in the blind spot during mandatory quarantine, and irregular workers in South Korea are suffering from fatal health risks in a difficult working environment and are losing their jobs.

We also noted that the Korean government has enacted related laws to crack down on people who spread fake news through YouTube due to the coronavirus since last year. Conservatism remains an issue here. For instance, thousands of far-right conservative groups held mass protests demanding the release of former President Park Geun-hye and demanded the resignation of the current government. Some far-right YouTubers are under investigation by the police for spreading anti vaccine narratives.

Former President Park Geun-hye was impeached for abuse of power abuse and corruption in 2017. Earlier this year, the country's top court denied her appeal and upheld her 20-year prison sentence. Conservative Christian groups are often seen as allies to South Korean far-right conservatives and are often critical towards current President Moon Jae-in's government.

GV: Can you give us a bit more background on the rising conservatism in South Korea?

CHK: You should know is that there's a serious divide between the conservatives and those who are striving for peaceful coexistence through dialogue with North Korea. The latter is striving to give up the outdated ideological framework that sees the existence of North Korea as a mere threat to the country.

Luckily, the youth participation and engagement in politics are promising. We're expecting to see less ideological and more inclusiveness in politics thanks to the youth. Lastly, I see that South Korean political system is gradually developing and the general public are embracing institutionalized democratic practices.

The Korean Peninsula was originally a single nation annexed by Japan in 1910. At the end of the Second World War in 1945, the country was divided into North Korea, backed by the Soviet Union, and South Korea, backed by the US Under the leadership of  Kim Il-sung. North Korea adopted a Soviet model of political dictatorship and economic collectivism, while South Korea had been under an anti-communist military dictatorship until 1987 when the first democratic presidential election was held. Roh Tae-woo of the Democratic Justice Party won the presidency and ended the South Korean military regime with a series of political and economic reforms.

The participants of 2021 Seoul Democracy Forum posing in solidarity with the people of Myanmar. Due to the global pandemic, most of the event took place online with few sessions held on site in at the South Korean capital. Photo by Korea Democracy Foundation, used with permission.