More voices call for the release of Zhang Zhan, a citizen journalist who could die in a mainland Chinese prison

Zhang's brother fears that she may not survive the winter 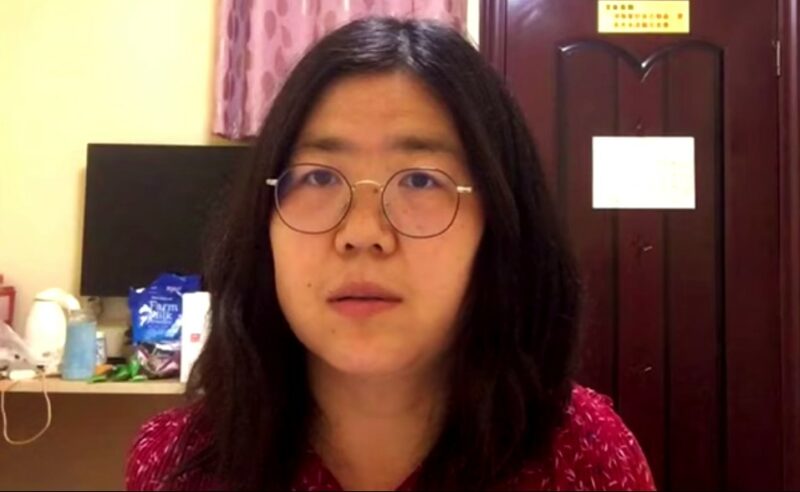 For months, international human rights groups have been urging China to release jailed citizen journalist Zhang Zhan. The US government joined the call on November 9 as Zhang's health is deteriorating, and she may not survive the coming winter in prison.

In February 2020, the 38-year-old citizen journalist uploaded more than a hundred video clips taken from Wuhan, China, during the early weeks of the COVID-19 outbreak. She was arrested in May 2020.

At the start of the pandemic, Wuhan was in lockdown for more than three months. Only state-affiliated media could report on the government's pandemic policies, resulting in fairly one-sided coverage that exclusively praised the authorities. Therefore, reports from citizen journalists were a crucial way for the public to understand what was really happening in the city. At least three citizen journalists, including Chen Qiushi and Fang Bin, were arrested for their work, but thus far, Zhang has progressed to trial and received a sentence.

Zhang has been on an intermittent hunger strike to protest her arrest for about 18 months. In December 2020, a Shanghai court sentenced her to four years in prison for “picking quarrels and provoking trouble” — a common charge against protesters and political dissidents in China. According to the prosecution documents, the “trouble” included spreading fake news and accepting interviews from foreign media outlets.

According to Amnesty International, she was tortured for more than three months as punishment for her hunger strike and was force-fed with a feeding tube before the trial. She was brought to court in a wheelchair on December 28, 2020.

According to her lawyer, Zhang refused to appeal the court's decision as she has no faith in the Chinese legal system. Instead, she has chosen to hunger strike intermittently to demonstrate her innocence. She was hospitalized for 11 days in August 2021 due to severe malnutrition. On October 30, Zhang's brother Zhang Ju broke his silence and wrote on Twitter that his sister would not survive the winter if she remains in detention:

Zhan is 177cm tall, now she has less than 40kg wt. She may not survive the coming cold winter. I hope the world remember how she used to be. pic.twitter.com/6hJ5AxBH88

Though Chinese authorities warned the family against speaking to the press, they have kept the media updated about her condition. Zhang's mother told a reporter from Radio Free Asia:

She can't walk unassisted now, and her head keeps drooping as she speaks. She will be in huge danger if they don't release her on medical parole. I cried for several hours straight after I got out [of a call with her].

Currently, Zhang's family is seeking medical parole. Yet, when lawyer Xie Yang tried to visit Shanghai to offer his legal assistance to the family on November 6, his health code suddenly turned red, and he was forbidden to take the domestic flight. The three-color health code system is part of a measure to contain the spread of COVID-19 by restricting individual movement according to the person's health condition and contacts. Some dissidents have claimed that the authorities have abused the system for political control.

Zhang Zhan is a victim of the Chinese government’s zero-tolerance approach to criticism and opposing views. She has been imprisoned solely for peacefully exercising her right to freedom of expression, and she must be immediately and unconditionally released

Conditions in China’s detention facilities and prisons are poor, usually with minimal nutrition and rudimentary health care. In recent years, a number of prominent dissidents in China have become seriously ill in detention, been denied adequate care, and died either in detention or shortly after being released.

We call on the international community to apply pressure to the Chinese regime and secure Zhang Zhan’s immediate release before it is too late. She was only performing her duty as a reporter and should never have been detained, not to mention receive a four-year prison sentence.