"We are not drowning! We are fighting!" 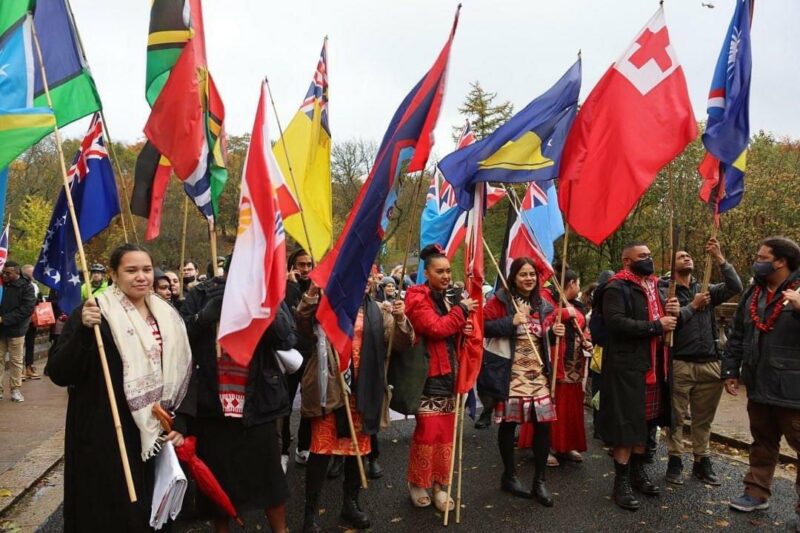 Climate activists from the Pacific during a protest action in Glasgow. Photo from a 350 Pacific Twitter post

Young climate activists from Pacific Island nations were among those who joined protests at the 26th United Nations Climate Change Conference of the Parties (COP26) in Glasgow, Scotland. From speaking in front of world leaders to marching with fellow environmentalists in the streets of Glasgow, young Pacific Islanders were able to highlight the destructive impact of climate change in their communities. This year, only three Pacific leaders were able to travel to Glasgow, which made the participation of young Pacific activists in COP26 more meaningful.

Pacific Island leaders have identified the climate crisis as the single biggest threat in their region as many small islands are at risk of disappearing due to rising sea levels. They are calling for bolder commitment and global action to address climate change.

Selina N. Leem from the Marshall Islands delivered an opening statement for the World Leaders Summit. She talked about the need to link the climate crisis with other social problems such as unemployment, poverty, and deterioration of public health.

Opening statement for the World Leaders Summit at the COP26. Video as promised. ?
Thank you Karen for cutting this video for me. ??? pic.twitter.com/uFity9yOA2

Brianna Fruean from Samoa reminded global leaders about the power of words to reframe the world. She also echoed the “warrior cry” of climate justice advocates in the Pacific: “We are not drowning, we are fighting.”

“We are not drowning, we are fighting. This is my message from earth to COP.” ?✊? pic.twitter.com/8EtgGOfnXO

A manifesto signed by young environmentalists in the Pacific was presented to the Secretary-General of the Pacific Island Forum and the Prime Minister of Fiji.

This evening in Glasgow, the Pacific Climate Warriors presented the #Youth4Pacific declaration on Climate Change to the Secretary General of the Pacific Island Forum, H.E Henry Puna and the Prime Minister of Fiji, Hon. Frank Bainimarama at the high level PIFS Oceans event. #COP26 pic.twitter.com/j8GWphWZLS

Dylan Kava from Fiji was among those who joined a forum organized by the UN Secretary General’s Youth Advisory Group on Climate Change. He wrote about what he felt and said during the event:

I have to constantly remind myself that I am here to represent young Pacific voices and I need to push past being uncomfortable and be able to hold space for our people who are here in spirit.

Young people are capable of mobilizing themselves, and it really is the optimism that drives this—Optimism, not as a privilege, but as a necessity for our survival!

If leaders can’t do it, young people will. https://t.co/PVkwFTTjBB

During the first day of COP26, Dylan Kava wrote about the importance of listening to the stories of Pacific Island communities:

Pacific voices are so important in spaces like COP. It is our stories that links the science and projections behind the climate crisis to REAL LIFE consequences and experiences.

We are resilient people, but we recognise the need for other countries to build their resilience as well if we are to have a fighting chance!

The young activists from the Pacific were also part of the street marches in Glasgow:

Together, we marched through the streets of Glasgow calling for climate justice & representing the many Pacific Islands & voices that were unable to make it here. Heads were definitely turned when we all showed up TOGETHER.

I was recently asked ‘what is the Pacific’s greatest contribution on the global scale?’ I replied: Our YOUTH!!! And this right here explains why this was my answer ☺️☺️☺️ #Pacific #Youth #YouthCan https://t.co/WImX11s5ah

I'm the only Ni-Vanuatu citizen made it to Glasgow for #COP26. I joined the Pacific youth warriors calling for Climate Justice and Action Now!
We marched through the streets of Glasgow representing many Islands & voices that were unable to make it here like my country Vanuatu. pic.twitter.com/tegacg5XGh

Tishiko King represented the Kulkalgal Nation to talk about how Australia’s Aboriginal communities are suffering from dirty development projects.

I have seen the impacts of our islands being washed away from rising sea levels, exposing the bones of my ancestors. Likewise, many Aboriginal communities on the frontlines of dangerous gas fracking, and are fighting to protect their country, culture and water and our future.