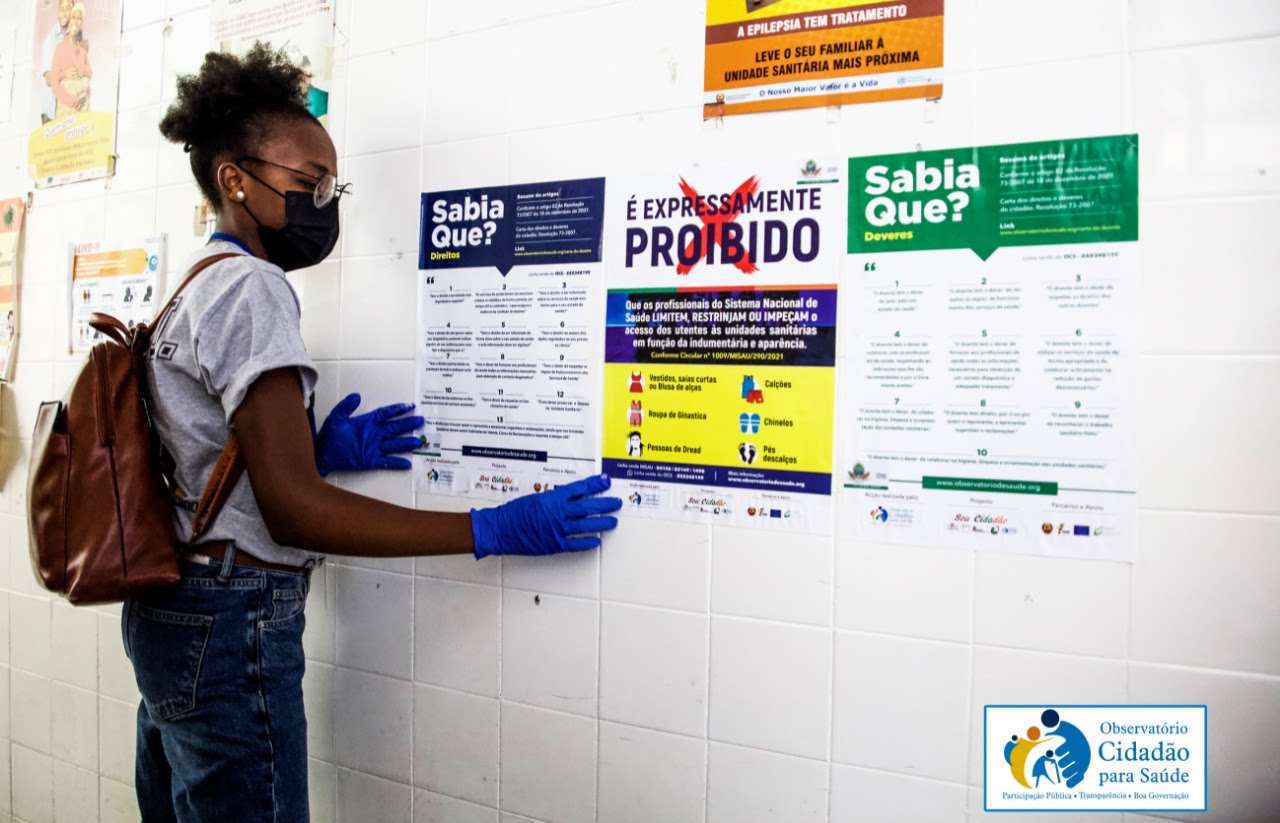 End of lack of access to health facilities due to clothing | Citizen Observatory for Health Photo (used with permission, November 2021)

For years, little was said about hospital rules that barred patients because of their clothes or appearance in Mozambique. The situation began to change in June 2020 when a civil society organization called the Citizen's Observatory for Health (OCS [1]) published a petition [2] demanding equal access to healthcare for all Mozambicans — regardless of their appearance.

Until then, people wearing short skirts, simple shoes, shorts, gym clothes, revealing outfits, or even those who had their hair braided in dreadlocks could be turned away by hospitals and healthcare providers.

The OCS published research [3] on the topic, arguing that barring access to health units due to clothing was a clear human rights violation. The move violates [4] Mozambique's Constitution of the Republic and other international treaties for the protection of Human Rights, such as the African Charter [5] on Human and Peoples’ Rights.

According to the OCS, in October 2020, the Ministry of Health (MISAU), through the National Directorate of Medical Assistance, issued a circular discouraging [6] health professionals from prohibiting user access to Health Units due to their clothing.

However, just one year later, in October 2021, a measure took effect officially prohibiting discrimination, which was publicized in hospitals around the country. The OCS called the act an important achievement, especially during the coronavirus pandemic:

The Citizen's Observatory for Health (OCS) has started posting posters in Health Units in the city of Maputo, containing messages announcing the end of the ban on access to health units due to clothing

Iva Mugalela, a dance teacher, exulted on her Facebook page, saying that the decision was a long time coming:

It was a lot of struggle, but it was worth it…I hope it spreads to other institutions….but dreads anyway???? Clélia Francelina, I know this is part of your job, well done… Julio Messa, that's it, at least you can wear shorts, without stress (although the best thing is not to go).

Nilza Nhamachua even pointed [14] out that the way hospitals operate in Mozambique is a result of stigma in daily life:

I still fight within my family to make people understand that the fact that someone has Dreadlocks does not make them different in their way of being, being and thinking about society. This stigma not only comes from the street but from the house itself. We still need to decolonize minds.

In the same publication, there were those who demanded that the state should go further in improving the provision of health services in the country, says [15] Mendes Alfazema:

It should also be prohibited for health professionals to ask unnecessary questions to patients with urgent care needs…. I was very sick, I was between life and death and they didn't want to see me before filing the process.

The clothing restrictions do not have any legal foundation in Mozambique, and the COH assumes that the ban emerged organically on the corporate level based on local customs and practices.

However, the organization's study [3] noted that it was not possible to extract precise data or numbers on how many people have actually suffered due to the prohibitive measure. Thus, the COH hopes to gather results on how the recent changes impact Mozambique's health services.