The Netflix series has become an internet cultural phenomenon 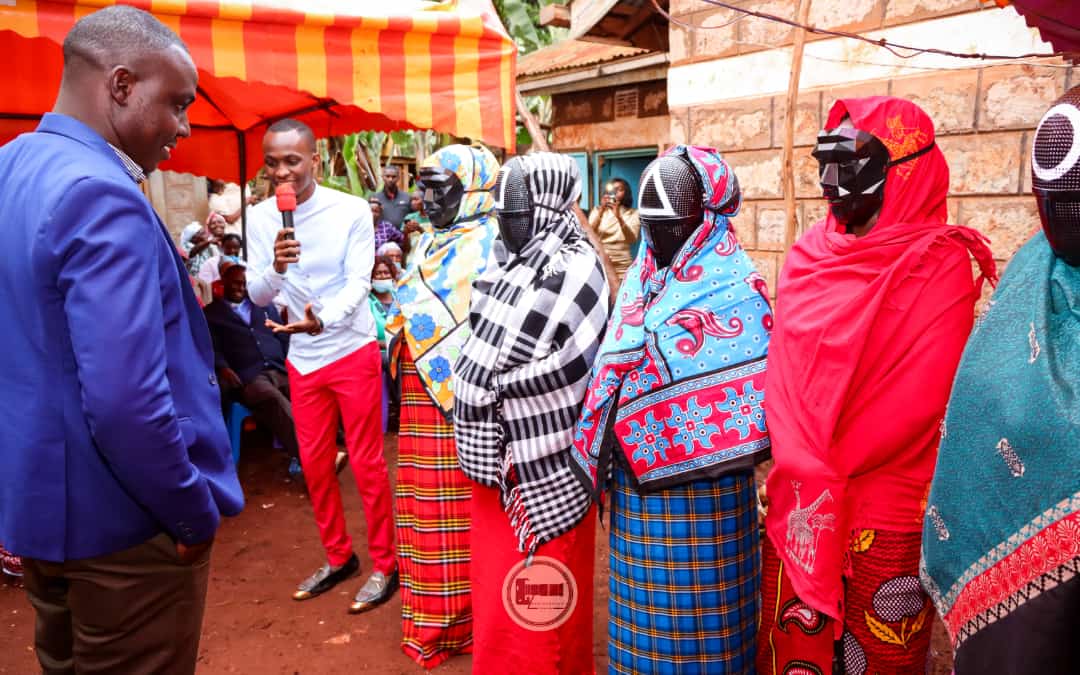 The groom (in blue blazer) looks for his bride at traditional Kenyan wedding ceremony that was inspired by the Netflix series “Squid Game” (Image source; @ViralTeaKe via Twitter)

“Squid game,” the Netflix hit series that debuted in September has become the most-streamed television program ever and is an internet cultural phenomenon. Its reach has since gone beyond the internet and made its way into popular culture. A recent traditional Kenyan wedding ceremony was themed around the series, similarly, this year's Halloween celebrations in Kenya, Nigeria, and South Africa spurred an increased Google search for Squid Game-themed costumes.

“Squid Game” is a South Korean survival drama television series that revolves around a contest in which 456 deeply in debt contestants play a series of classic children's games for the chance to win 38 million US dollars in prize money, and face death if they lose.

The series — rated TV-MA for language, violence, sex, nudity, suicide, and smoking — has been streamed more than 111 million times so far. Within days of its September 17 Netflix debut, the series had taken the internet by storm, spawned Squid game challenge videos on TikTok, and inspired thousands of memes on social media.

A few days ago, photos and a video of a Squid Game-themed traditional wedding ceremony, known as a ngurario, began circulating on Kenyan social media. In the photos, young women line up waiting for the groom to identify his bride while wearing the famed Squid Game masks, including the square, circle, triangle, and full-black imagery. They also wore varied traditional attire, as is customary during such events in Kenya.

Originating from the Gĩkũyũ/Kikuyu community of central Kenya, the ceremony is the final part of the numerous Kikuyu Dowry and marriage ceremonies where the groom is expected to gũcagũra mũka — to identify his bride from a group of women whose identities have been deliberately concealed.

The women — often friends, siblings, or cousins of the bride — are wrapped from head to toe with khangas (wrappers) and presented in groups go the groom and the congregation.

The groom proceeds to uncover his wife by removing the head wrapping. When he identifies his bride, the ceremony is marked with loud jubilation. If he picks someone other than his bride, he will be penalized in the form of a cash payment to the bride's family. If stuck, he may request the assistance of his best man.

Wedding emcee Antony Gitau alias Mc Tony, who had taken and shared the video online, told Citizen Digital, a Kenyan media outlet, that he thought the masks each woman wore were especially symbolic. In the show, the circle, square, and triangular shapes each demonstrated the ranking of the guards. The bride aptly wore a mask with a triangle on Saturday, and according to Gitau, this was a symbol that she is always present, round the clock.

You see, from the show, you could tell the ranks and hierarchy of the guards based on the masks they wore.

Workers with square shapes oversee the other workers and the players. The triangle shape masks are traditionally the protectors/enforcers and armed with weapons.

When you thought you had seen it all then boom
A squid game themed Ruracio ??????
You gotta love Kenya guys…. pic.twitter.com/5IJ75D2Y04

You have taken Squid Game to a traditional wedding ceremony

Then there were those who speculated what would have happened had the groom picked the wrong bride:

That squid game at Ruracio — what happens if that man picks the wrong woman?

A Citizen Digital reporter opined: “We are just happy that the groom was not shot to death in case he picked the wrong girl in front of her parents and elders.”

Halloween — a holiday primarily celebrated in the US and Western countries on October 31 — has been catching on in some top African cities.

Since the series was released in its entirety on September 17, 2021, Google search trends indicate that interest among Kenyans, Nigerians, and South Africa has been growing steadily until the week before Halloween when searches of Squid Game costumes spiked. Searches for “Squid Game costumes” was the top trend in all three countries,

Kenyans celebrating Halloween over the weekend were eager to showcase outfits from the pop culture sensation, reports Star Newspaper

URGENT: LOOKING FOR A SQUID GAME MASK FOR WEEKEND. ANY SHOP IN KENYA THAT HAS ONE PLEASE DIRECT ME. RT

For many celebrating Halloween this year, it became difficult to tell whether they were celebrating the traditional holiday or the Netflix series.

Is this Halloween or squid game day ? What’s really goin on ?

In South Africa, Squid Game was the most popular costume search on Google for Halloween with Western Cape, KwaZulu-Natal, Gauteng, Northern Cape, and Free State generating the most queries.

In Nigeria, data trends show that searches for the term Halloween had been steadily rising over the last 30 days, with Kwara, Oyo, Katsina, Bauchi, and Benue, states generating the most queries. Squid Game Costume, Cinderella Costume, and Father Christmas costumes took the top three search spots.

This year, many struggled to source for the costumes due to Global supply chain issues which made finding Halloween costumes harder for some shoppers.

Despite the criticism that the series has received for its violence, which has been described as dark and gory, it has unquestionably become a global cultural phenomenon exporting Korean pop culture to the world.