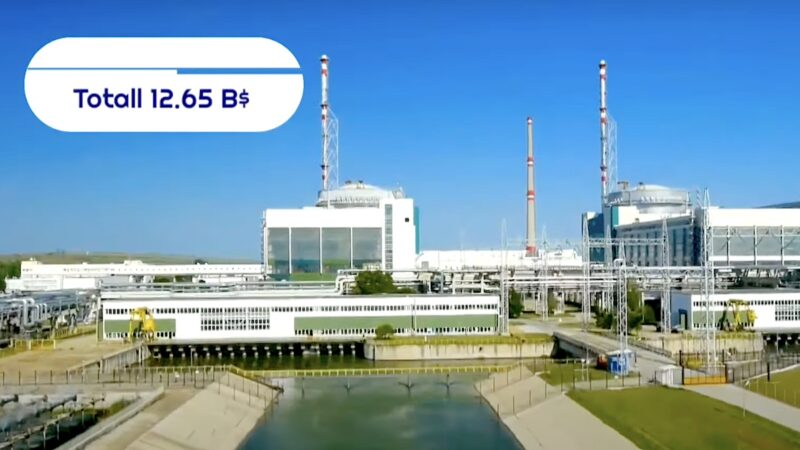 A graphical depiction of the Rooppur Nuclear Power Plant being built in the Rooppur village in Pabna district of Bangladesh. Screenshot from YouTube video [1] by ‘Touch Your Mind’ channel. Fair Use.

Russians on the streets, in restaurants and in shopping malls, as well as signs written in Russian alongside Bengali billboards all beg the question: “What does a slow-paced village in the Ishwardi region (called an Upazila [2]) of Bangladesh's Pabna District [3] have common with the world's largest country?”

The answer is that the Russian Rosatom State Atomic Energy Corporation [4] is building key infrastructure for a 2.4 gigawatt nuclear power plant [5] in Rooppur, including the installation of two VVER-1200/523 [6] nuclear reactors. Starting in 2016, the project's rapid pace of development—along with the presence of a few thousand scientists and technical professionals, most of them from Russia—has largely propelled Rooppur's massive transformation:

As a result, the landscape of the area has completely changed [11]. The landscape now consists of high-rise buildings, new shopping malls and schools, as well as world-class hotels, restaurants, and resorts near the Padma river. Local shop owners are learning the Russian language in order to sell their products to Russian expat workers with ease, and signboards are increasingly being written in both English and Russian. Rooppur has grown to be a little Russia within Bangladesh.

The genesis of the power plant

Bangladesh needed a solution to meet rapid energy demand growth [12], which is linked to its GDP. In 2008, China offered to fund [13] a nuclear power project, but just two years later, Bangladesh entered into a 12.65 billion United States dollar nuclear power deal [14] with Russia, 90 percent of which is being funded by a loan from the Russian government to ensure cheap energy production [15].

The Russian state company Rosatom State Atomic Energy Corporation [4] (ROSATOM) has been financing and building reactors [16] across many countries in order to increase Russia's geopolitical influence and generate financial profits for the country. Under the agreement, ROSATOM has been constructing the 1,062-acre plant in Rooppur under its build, own and operate (BOO) model; thus far, 40 percent of work has been completed [17].

Having commenced groundwork in 2016, the two power generating units are projected to become operational by 2023/24. Russia will [18] provide nuclear fuel to run the operations. It has also agreed to train local professionals and take back [19] the used nuclear waste for disposal.

The power plant project [20] has radically transformed [21] the outlook of small villages like Rooppur, Sahapur and Notun Hat near Ishwardi, improving the livelihoods of the locals.

One of the first changes people noticed [22] was a 20-storey housing development in a remote area of Notun Hat, which was completed around [23] 2018. Travel bloggers began visiting and sharing their experiences, as seen in this vlog [24] from Global Entertainment, posted on YouTube in 2020:

Cultures have become so integrated that the area's demographics also look very different. Approximately 4,000 employees from Russia, India, Ukraine, Belarus and other former members of the USSR have become part of the local workforce for the project. More than 20,000 people work in the plant and related infrastructure projects, and there are over 3,000 Russian-speaking workers whose presence has made a huge impact on the local population. These foreign workers often share their lives [25] in Rooppur on social media [26]:

Of these, perhaps the most notable vlog is Olga Totckaia's Little Russia in Bangladesh [27], which was featured [28] in an October 2021 BBC Bangla report [29]:

In the video, Totckaia notes that in addition to the businesses located close to where the foreign workers live, many local shopkeepers in the nearby town of Ishwardi have picked up the Russian language in order to interact, prompting Ayesha Siddika to comment [30]:

This is the most impressive video I have ever seen. I love this little Russian city. I want such a small Bengali town to be built in Russia too. Let the Russians know about the Bengali language and culture.❤️❤️❤️????

A student of Dhaka University tweeted:

On his blog, Anowar Nurul Islam wrote about [35] this exchange of language and culture:

A lot has changed in the space of two and a half years. From local saloons to super-shops or malls, fruit shops or fish and meat markets, most of them have Russian letters in the signboards. There is a spontaneous presence of Russians in the restaurants and tea-houses near the residential areas. There is also a cultural exchange happening as the foreign workers try to interact with the shopkeepers in Bengali and many shopkeepers are learning the Russian language. Some of the locals have also learned to write in Russian. Proof of this is the handwritten signboards. 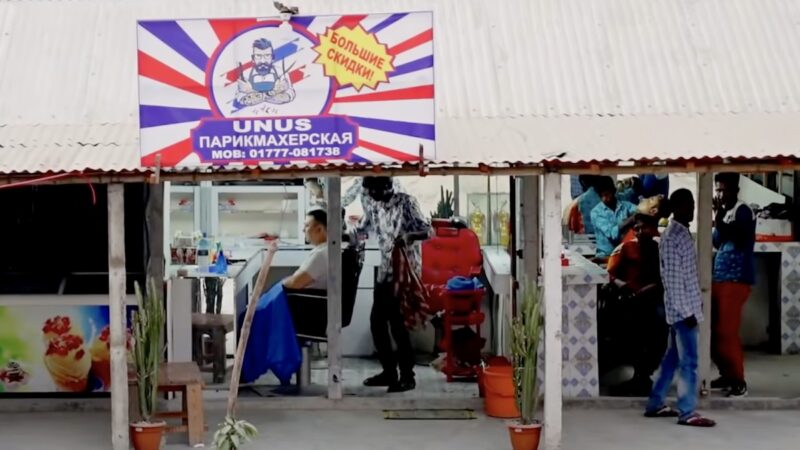 A signboard in Russian in Ruppur, Ishwardi, Bangladesh. Screenshot via YouTube Video by Olgesh.in.Bangladesh [27]. Fair use.

It is an exchange the Russian expats are happy [36] to be a part of. IA Tupilov, director of the Russian Atomstroyexport (ASE) in Bangladesh, told The Daily Sun [37] that “the population treats Russian specialists quite well.”

Despite everyone's enthusiasm, certain things may be lost in translation—including the pronunciation of the town's name. In a thread on the ROSATOM South Asia Facebook page, Shoaib Nury quipped [38]:

Naturally, as part of the support system for such a large project, there has been massive infrastructural development [39] in the surrounding areas. Several shopping malls, super shops, resorts, hospitals and quality hotels have been built in Pakshi, Sahapur, Rooppur and Ishwardi, all catering to the daily needs of foreigners—and thousands of local people, many of whom had previously been unemployed, have found jobs in many of these new businesses. A new 27-kilometre railway, a river port and 100 km of paved roads have also been constructed [40] in the Upazila.

As Shaukat Akbar, project director of the Rooppur Nuclear Power Plant, put it [41]:

Most local workers no longer come to work riding on a bicycle. They have graduated to motor-bikes. The Russians said when the project is completed, some workers would own cars. Rooppur is the first nuclear power plant in the country. This project is transforming the livelihoods of so many people. The quality of life is improving.